Thank You For Your Service, by David Finkel. 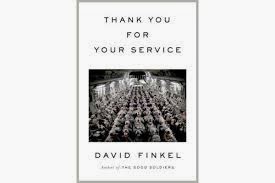 Rarely in life does a book come along that has me telling everyone I know that they have to read it. I just finished  Thank You For Your Service, and if you have friends or family returning from military deployment, you may find this book to be an invaluable resource.  Yes, there are a number of books on PTSD out there on the market already, but trust me -- you will have never read anything like this one.

Mr. Finkel's prior book The Good Soldiers, had him embedded with men in an army battalion in Baghdad during the 2007 surge. Thank You For Your Service finds him embedded yet again, but this time here in the US, after the soldiers' deployments are finished.   As the dustjacket blurb states, "He is with them in their most intimate, painful, and hopeful moments"  in a period he calls the "after-war," as these men begin the process of trying to recover.  The book focuses on soldiers returning with "the invisible wounds of this war, including traumatic brain injury,  post-traumatic stress, depression and anxiety," causing emotional, mental and physical scars, often  finding their outlet in spousal abuse, alcoholism, drug abuse and sometimes suicide.  But it's not just the men --  the author also offers the viewpoints and voices of  wives or girlfriends who try to adjust to their men being home but broken.  In most cases, the women are simply not equipped to handle the changes and they often wonder what happened to the men they said goodbye to at the start of  their deployment.

The Army does offer some help for their men, but it comes largely in the form of medications -- often a high-powered combination of meds to control anxiety, depression, and sleeplessness.  There is also the possibility of entering Warrior Transition Battalions (WTB), but just getting in is a bureaucratic nightmare.  One man had to collect over 30 signatures in a given amount of time, only to find that some of the offices he had to visit were closed or manned by inadequately-prepared staff.  And although these soldiers have to sign a Contract for Safety, including a promise that if they are feeling suicidal they'll let someone know, the suicide rate continues to climb.  In Washington, at least one man, General Peter Chiarelli,  took the suicide rate very seriously, demanding accountability for each and every self-inflicted death at regular meetings.  However, his efforts were often at the mercy of senators and other high-ranking officials, whom he had to wine and dine and who sometimes had other things that were more pressing. In trying to put together "lessons learned from the cases," details revealed that it was "difficult to learn much at all."  Attempts to find patterns in the suicides remained elusive, and trying to get at a cause for both suicide and PTSD was nearly impossible:


"...could the cause have something to do with the military now being an all-volunteer force, and a disproportionate percentage of those volunteering coming from backgrounds that made them predisposed to trauma?"


Have we asked too much of these men?  There are other treatment options but for men like Adam Schumann, the veteran whose story is central to most of  this book, it would mean, as his wife notes,

The rehab treatment place where Schumann eventually  received help was saved from closing at the last minute by an anonymous donor.

The soldiers and their families who agreed to participate in Finkel's work did so knowing that everything would be public and on the record, and this openness is what makes this book so haunting. Sometimes I had to put the book down, regroup emotionally, and then come back to it -- and when a book can do this, the author has done an excellent job.  Most highly recommended; my favorite book of the entire year.