The Wicked Boy: The Mystery of a Victorian Child Murderer, by Kate Summerscale 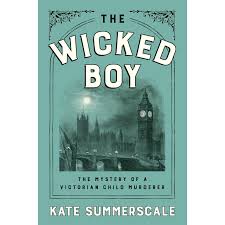 As someone who loves all crimes Victorian, I'd been looking forward to reading this book ever since I discovered it was going to be published.  Kate Summerscale is the author The Suspicions of Mr. Whicher, one of my favorite historical true crime studies; that book held me pretty much spellbound right through to the end. She is one hell of a researcher for sure -- her books are steeped in cultural, social, economic and historical context so that the reader has a very good feel for  the bigger picture stemming outward from the crime in question, so that the end result is, as one blurber wrote about her Mrs. Robinson's Disgrace, the author "shed(s) light on Victorian morality and sensibilities."  Her research is nothing but meticulous, and both as a reader and as someone who enjoys history, I can tell she puts her heart and her soul into her work.  And it pays off.

In The Wicked Boy, Ms. Summerscale takes on the story of Robert Coombes, who in July 1895 at the young age of thirteen, killed his mother, closed the bedroom door where the crime was committed, and then along with his younger brother Nattie, calmly went to a cricket match. The crime went undetected for a while, even when the brothers brought an older man, John Fox,  into the house to stay with them, and whenever anyone would ask about mom, they were told that she was out of town. But some ten days later, the milkman noticed a terrible smell, and passed the word around to the neighbors, who turned around and let the boys' aunt know.  When she arrives, she demands to speak with her sister-in-law, but Robert continues with the lie that she's out of the house.  Auntie, though, demands to see their mother, and when the bedroom door was finally opened, she was met with "the smell of rotting flesh" and the "form of a woman, lying on the bed, the face covered by a sheet and a pillow."  When faced with what he'd done,  Robert admits that it was he who had killed his mother because Nattie had "got a hiding for stealing some food, and Ma was going to give me one." 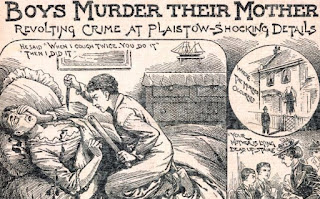 In examining the whys in the case, Summerscale turns to different factors that may have played a role in the reason Coombes did what he did. Maybe he was heavily influenced by the stories in the penny dreadfuls he read -- after all, as she notes, they had been occasionally linked by inquest juries to suicide and murder; the press had noted that they were "the poison which is threatening to destroy the manhood of democracy," and for some reason they were viewed as representative of a threat from the "lower orders." Or perhaps it was that Robert was afraid of his mother's temper and her threats of violence,  or maybe even as Summerscale notes the illustration above suggests, some sort of hidden psycho-sexual  "irresistible impulse."  It's an intriguing crime that I'd never heard of, and the whys may never be known.  After the author examines the particulars of the case, the law, the trial, etc., she then goes on to argue that perhaps history shouldn't judge Robert Coombes for what he did in July 1895, since he went on to lead an exemplary life.

As I said, it's very obvious that she's researched her story and her people meticulously. I couldn't get enough of the crime itself, trying to figure out why Robert would have done what he did and what Nattie's involvement may have actually been.  However, there comes a time when any researcher worth her or his salt has to know what to keep and what to let go when reporting her findings, and that's one of my issues with this book. There is so much detail that some of it easily could have been left out with no detriment to either the study of the crime at hand or the people involved.  For example, from pp 226 through 233 we get a long section on another Broadmoor inmate who played cricket at Broadmoor while Robert was there. Then, through the end of that chapter on 239, more about another young inmate. Interesting, yes, but germane to Coombes' story? I get that she's discussing other adolescents who ended up there, but still, thirteen pages?  This tends to happen throughout this book and it's frustrating when all I wanted to do was to move along and get on with Coombes' story.   However, despite my misgivings about the overabundance of what I see as unnecessary details woven into this narrative, I would certainly recommend the book to anyone who has an interest in Victorian true crime.

Posted by NancyO at 1:56 PM No comments: