Village of Secrets: Defying the Nazis in Vichy France, by Caroline Moorehead

arc - from the publisher, thank you!

"Parallel to the map of Vichy is a map of decency."

Now here's a book definitely worth every second of time I put into it. It's also one that stayed with me for some time after finishing it.

In the author's Foreword to this book, she notes that  in 1953 an article appeared in Peace News about a pacifist pastor named André Trocmé in the French parish of Le Chambon-sur-Lignon who "helped save some 5,000 hunted communists, Freemasons, resisters and Jews from deportation to the extermination camps of occupied Poland."  According to this piece, Trocmé had instilled his belief in non-violent, peaceful resistance among his parishioners, and it was in this spirit that they were led to take in, hide, and sometimes get people whose names "appeared on Nazi death lists" safely over the Swiss border.  Over two decades later, in  1988,  Le Chambon was designated by Yad Vashem as the only village in the world to be  "Righteous Among Nations," an appellation that  in combination with a number of articles, documentaries, and memoirs about this remote village in the Massif Central, perpetuated an ongoing  "myth" about Trocmé's role and that of Le Chambon as well.  But there's a problem here:  by focusing solely on this small, remote village and this peace-loving Protestant pastor, over the years that "myth" has ignored a lot of other people -- those from other places, of other beliefs, and even a number of  humanitarian authorities who literally risked everything to help save people designated for the camps.

In Village of Secrets, the author begins her study with the coming of the Nazis to France in 1940 and the establishment of the Vichy government under Pétain. At first, early measures of repression against certain targeted groups ("foreign" Jews, Freemasons and Communists) were accompanied by propaganda that targeted these groups as "dark forces of the 'anti-France." However, as time went on, it became clearer that the government was expected to play a role in helping the Nazis  implement their own policies against the Jews -- not just the foreign-born, naturalized citizens, but eventually the French-born Jews, who'd mistakenly believed that their status offered some modicum of safety. As the author points out, not everyone was willing to stand by and watch this happen -- a number of organizations and individuals stepped in to save as many people as possible, especially the children. Networks were created to put their plans into action, and the remote, inaccessible-in-winter Plateau Vivarais-Lignon was one location where these volunteers were willing to leave those they'd managed to save from the camps.  Pastor Trocmé had told his Le Chambon parishioners that it was their duty to ""resist whenever our adversaries demand of us obedience contrary to the order of the gospel" --  and the people took his message to heart, taking in new arrivals. Many of the people on the Plateau were members of various sects that practiced quietness, so there was little chance that they'd open up to strangers who might come looking for those in hiding.  But, as Ms. Moorehead states, it wasn't just the villagers in Le Chambon, nor was it just those of the Protestant faith who helped save lives on the Plateau Vivarais-Lignon. Members of the Catholic, Quaker, and Jewish faiths also contributed, as did agnostics & atheists. There were other villages where community co-operation helped save lives, and most surprisingly, she tells of some of  the local authorities and policemen who turned a blind eye to what was going on, often providing warnings of impending Gestapo visits. As time went on, members of the Resistance were taken in, as were young men who refused to report for the national Service de Travail Obligitaire -- a national conscription for forced labor in Germany. And it was in this mountain area that "more people, proportionately, were saved than anywhere else in France." 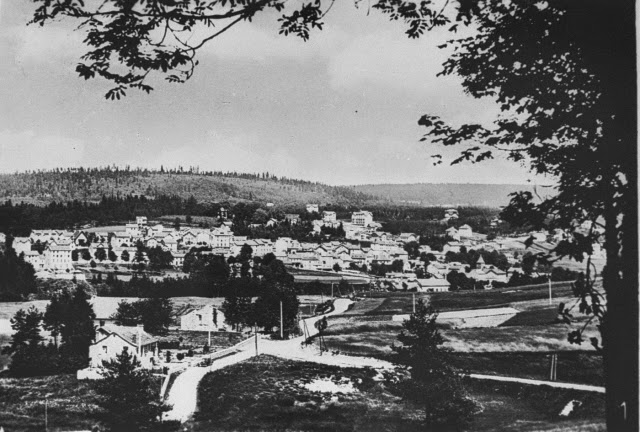 While the accounts she relates are intriguing, heroic and often heartbreaking, one very important issue this book touches on is history itself. Right after the war, as she notes, the French


"were encouraged, not only by DeGaulle but by all the political classes, to believe that Vichy had been the work of a small number of traitors, more misguided than evil, drawn into treachery by the Germans."

That view would change some years later in the 1970s, as authors such as Robert Paxton and Michael Marcs "meticulously pulled the myth apart," to show that the big players in Vichy actively sought collaboration with the Nazis, with the goal of "carving out a new role for France in Hitler's new Europe." Their work brought on debates that are still part of the French political scene, and they also brought out the long-neglected story of the Jews in France during the Holocaust.  But this period of history is still debated among people throughout  the Plateau Vivarais-Lignon, the result of a contentious trifecta:  1) the publication  of a book based on Trocme's autobiography by an American historian looking for "proof that pacifism could successsfully counter violence," 2) a documentary that used some of the material in that book, and 3) a lecture given by the book's author that came across to the people who had lived it as "a mutilation of historical truth by revisionists."

Village of Secrets is a most excellent book that, as its bottom line, examines how ordinary people responded to very extraordinary circumstances during this terrible period.  It is also an examination of  the realities behind the myths and the changing discourses evolving from this historical period.  It is an incredibly well written and  meticulously-researched narrative that uses first-person accounts of people who lived to tell their tales due of the help they received from others, as well as accounts from some of those who helped them to survive.  What really struck me here were the stories of those who were brought into hiding and ultimately stayed safe through the war - these are interspersed throughout the narrative and for me were the most powerful parts of the entire book. For some of them, the aftermath of living in hiding wasn't all positive and led to issues they had to overcome later in life. Every time one of these stories came up, I put down my note-taking pen because I wanted to catch every single word. I can't even begin to imagine what they lived through.

I don't often find myself reading World War II European history, so a lot of things were totally new to me here, but I have to say that I was never once bored, nor did I ever feel like I was on information overload.  Reader reviews have been much more positive than negative,  and it seems to me that the naysayers have wanted everything given to them without wanting to take time to understand the overall history of this place in this time period. One reviewer referred to it as "a slog," which is absolutely not true.  If you're a lazy reader, that's your problem -- it's certainly not the problem of the author.   Village of Secrets is a much-appreciated addition to my history library, and I can't recommend this book highly enough.

My many thanks to TLC book tours who brought this book to my attention, and to the publishers for my copy of the book!

There are many more people reading Village of Secrets for TLC; if you want to follow other readers' opinions, you can find the schedule here.

Posted by NancyO at 9:27 AM No comments: