back in print: The Big Love, by Mrs. Florence Aadland 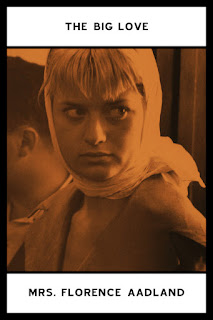 paperback
my copy from Eva at Spurl -- thank you!!!


Oh my god.  I had absolutely no idea what I was getting myself into when I started reading this book, and by the time I was finished, I was just sitting here thinking a) that the woman who wrote this book would never win my nomination for mother of the year, and  b) how delightfully trashy it all is.  The Big Love is an example of why I always say yes to Eva at Spurl -- I never know what kind of "unusual literature" they're going to come up with next.    I wasn't too far into it before the thought popped into my head that something's just not right here, a feeling that turned into a certainty the more I read. And in a brilliant move, the publishers have included a piece from Master Detective Magazine of August, 1960, which not only says it all, but which sent me poring over contemporary tabloids, newspapers, etc., for more -- not about the affair described in this book, but about the author herself.

I won't go into too many particulars, but Mrs. Florence Aadland was the mother of Beverly Aadland, who at the age of fifteen began a long affair with actor Errol Flynn.  The true tragedy here is that with Florence Aadland as her mother, this poor girl just never had a chance, but that's not something you'll hear about here.  Let's face it -- one thing that comes out of this book more than anything else is that this is all about Florence.

The book, I think, serves more than one purpose for Flo (as she's referred to throughout) -- number one, it's her bizarre way of defending herself against " do-gooder busybodies" as to why she allowed her teenage daughter to have a two-year affair with the actor Errol Flynn, some 33 years her senior (and why she'd let it happen all over again if she could); number two, it's also a way she could continue the exploitation of her daughter's relationship with the actor even after his death, especially in the light of not only her current financial situation, but even more importantly, a  number of legal problems that kept the tabloids busy for a long time.  Especially revealing is how this book begins:


"There's one thing I want to make clear right off: my baby was a virgin the day she met Errol Flynn."

Even knowing nothing of what was yet to come, I started  thinking "oh my god, this is going to be great."  And it was.

She goes on to say that


"Nothing makes me sicker than those dried-up old biddies who don't know the facts and spend all their time making snide remarks about my daughter Beverly, saying she was a bad girl before she met Errol."

At the time Flo was telling all, she'd been in a lot of trouble, especially when a probation report emerged saying that her daughter had, among other things,  since the age of twelve, "been dating adult men," and that she was a "$100-a-night teenage call girl."


The affair with Errol Flynn began in 1957 when young Beverly captured his eye while the two of them were working at the studio. According to Flo (the facts told later to her by her daughter), he took her out, then brought her home and raped her, tearing her $75.00 dress.  (Keep that phrase in mind -- Flo seems to enjoy putting price tags to everything.)  At the time, Beverly was only 15, but according to Flo, Flynn thought she was much older. (Never mind that in 1943, Flynn had already stood trial for statutory rape of not just one, but two girls)  Flo says that Beverly tried to resist, but afterwards, she couldn't help falling in love with the guy, and the two began a long affair that lasted until Flynn's death.  Of course, not knowing about that first encounter, as Flo relates, she was invited to accompany  Beverly to Flynn's home, where she first realized that with Beverly, he had "won her over completely."  It was only a few months later while on a plane to New York to join Flynn that Beverly revealed the truth; it was then that Florence swore that she was "going to put up one hell of a fight to see to it that he married my daughter."  Her original plan was to "tell him off"; but it seems that the opportunity came and went, being "gone in a flash" since he was


"such a lively character, so flip, so quick to turn a person's thoughts onto a new subject."

Right.  So much for that plan, and the affair begins in earnest complete with mom's blessing, and lasts until Flynn's death. And even then Flo and Bev weren't done, but I'll let others discover in the book what I mean about that statement.

The thing about The Big Love is that it's not so much the affair between a 15 year old and a man 33 years older that kept me reading,  but Florence herself.   It's sadly humorous and tragic at the same time to watch Flo's rather crass, vulgar self take shape within these pages.  She's trying to convince the "do-gooder busybodies" who "never bother to examine the facts," about her little girl, who "went to Sunday School and church for years..." whose life was "preordained" early on when Flo was told that "men are going to kill over this girl. She has the scent of musk upon her."   And then there's that scene at the "tremendously swanky graveyard" at the end in which Flo muses that some people will

the "kind of people who would condemn Beverly for laughing and dancing at Errol's grave."   They are, as she says,  "people who don't count with us anyway."   Righty-o.

If ever a book could be labeled bizarre, it's this one, and god help me, I enjoyed every trashy second of it.   If you're ever in the mood to read something so bad that it's absolutely brilliant, this is the book. Major kudos to Spurl for putting it back into print.

Posted by NancyO at 1:11 PM No comments: 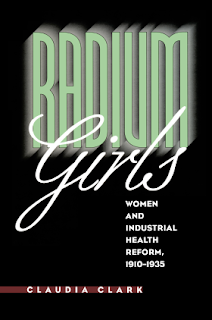 After finishing Kate Moore's Radium Girls, which was okay and did the job the author meant it to do, I wanted to read an historical account of this story.  Where Moore's account is more firmly focused on providing the human face of this tragedy, here we get down to the forces that allowed it to happen in the first place and the attempts made toward reform so that it could never happen again.

As is made clear both in Moore's book and here, the young women who worked painting luminous dials on watches did so by means of lip pointing.  As they put the brushes into their mouths to make them sharper, they were also putting quantities of radium directly into their bodies.  No one at the time could have predicted what would happen next; radium was thought to provide wonder cures, was being sold on the open market;  the dial painters even had fun putting the substance on their teeth, hair, nails, and clothing.


However,  dial painters began to show up at their dentists and doctors offices with varying illnesses, including necrosis of the jaw, strange fractures and anemia.  Some of the women and their physicians or dentists began to wonder if their horrific symptoms were related to the radium paint or the factories in which they worked; investigations were made but the powers that be at the dial-painting facilities rejected the idea that the women's troubles had anything to do with the workplace or with their occupation.  In New Jersey, for example, the case of Irene Rudolph led her doctor to make a report to the state Department of Labor, but they found nothing "that conflicted with state factory laws."  Even though one consultant issued a warning that "radium might be behind the illness of the dialpainters," and that "every dialpainter should be warned," no action was taken. Another case came to light in January 1924; by February three of the women were dead, but at every official level where people may have made a difference, nothing was done.  Enter the women of the Consumers' League, committed reformers who worked tirelessly to not only bring these cases into the realm of public knowledge, but to take steps to have radium poisoning defined as an occupational illness, so that the women would have access to compensation.  Without the intervention of the Consumers' League, as the author notes, "the dialpainters would never have established the cause of their illnesses and deaths."

The women's fight to gain recognition for illnesses associated with the industry in which they worked was a long one, and despite the reformers' actions, was often impeded on several fronts. Clark discusses how the factory owners knew about the dangers of radium yet continued to not only deceive these women as to their safety, but it doesn't stop there. Self interest was another factor, in which scientists and physicians who received funding from these companies refused to divulge what they knew so as not to alienate those who funded their work. As she notes, the book traces "the failures of industrial health reform to a faith in the autonomy of 'experts' in both government and medicine."   There's much more here, as she examines the "social and political factors that influenced the responses" of everyone involved.

Clark's Radium Girls manages to give the women in her study a great deal of consideration without all of the litany of suffering that appears in Kate Moore's account, which was one of my big issues with that book. Unlike my experience with Moore's book, in this one  I came away with a better understanding of the historical, social, and legal milieu in which these battles were being fought. And while I was completely absorbed in this book, it wasn' t perfect -- as just one example, as various topics are introduced into the narrative the author ends up having to provide a brief background  so that the book becomes a bit overwhelming in terms of many histories going on at the same time which sort of pulls attention away from the real focus of her work.

Many readers found this book to be "dry" or lacking sympathy for the dial painters themselves, but I didn't get those vibes at all. Then again, as I told someone recently, I'll probably die with a nonfiction book in my hand because I love getting down to not only the whys and hows of events of the past, but how those past events reflect or have had an effect on the present.  In that sense, I was not at all disappointed with this book, and frankly as someone who knows very little about the history of industrial health,  I found it quite fascinating.