A Very English Scandal: Sex, Lies and a Murder Plot at the Heart of the Establishment, by John Preston 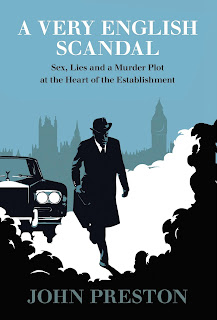 
Jeremy Thorpe's leadership of the  Liberal Party began in 1967.  Then, after a career which set him on a path to participation in the highest ranks of British politics,  just twelve short years later he was not only out of a job and in disgrace, but standing trial for conspiracy to murder.

In this book, the author traces exactly how this happened, following the story of Norman (Josiffe) Scott, who had claimed that he and Thorpe had had a sexual relationship starting in 1960  when Thorpe forcibly sodomized Scott.   Thorpe, of course, denied the claim, while Scott would tell others exactly how Thorpe had ruined his life. One huge bone of contention between Scott and Thorpe was that Scott had lost his National Insurance Card, which Thorpe had promised to replace and never did.  As Thorpe continued to rise in the political firmament, Scott's mental health and living situation deteriorated to the point where Scott felt compelled to tell his story to anyone who would listen.While nothing was really done about Scott's accusations, over the years Thorpe realized that Scott had documents (letters that could prove Scott's claims)  -- and that his very existence could become problematic vis-a-vis Thorpe's career.  He allegedly hired a hitman to take care of Scott, who proceeded to bungle the job, garnering the attention of the police and the press by killing a dog instead.

I'm not someone who is much into reading about scandals, since I prefer to devote my reading time to other pursuits.  However, while the murder plot is interesting, there's much more in this book worth examining.  First, of course, is how quickly Thorpe's political connections closed ranks to protect their man and their party, down to the prosecutor who obviously failed to "prosecute the case as vigorously as he might have done," with some people commenting that his ambitions led him to not wish "to ruffle too many feathers." Thorpe's friend Peter Bessell continued to cover up for him even after he knew about the murder plot, based on some long-standing, blind loyalty until Thorpe began to throw Bessell under the bus.  Even the judge in the case, if Preston is correct here, had already taken sides as the trial began. Then there are the police -- shutting down any inquiries that may have revealed the truth of things, hiding documents that could wreck Thorpe's career, accusing Scott of "hysterical fantasizing," and putting Scott through the emotional wringer instead of treating his complaints as valid. Second, and probably the most interesting aspect of this book for me, is the fact that until 1967, homosexuality was still illegal in Britain. Even after the law was changed (a brief history given here as well),  gay men continued to be treated contemptuously, and politicians like Thorpe continued to remain reluctant to come out of the closet publicly.  During the trial against Thorpe, for example, Scott's sexuality was put on trial more than once, with one barrister saying that homosexuals were known for their "terrible propensity for malice."

While Preston can tell a story like nobody's business, I was a little disoriented at first with the lack of footnotes. Sources are also nonexistent, except for mentions of people and books in the Acknowledgements section, and even there we're told that "All the exchanges between Jeremy Thorpe and Peter Bessell come from Bessell's book, Cover-Up," Bessell's aide-memoire, so buyer beware.  On the other hand, it is so well told that you'll find yourself becoming immersed from the beginning and unable to stop reading.

Recommended.
Posted by NancyO at 2:06 PM No comments: