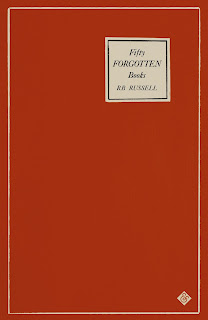 "intended to be a personal recommendation of often overlooked and unloved novels, short story collections, poetry and non-fiction."

If Fifty Forgotten Books had simply stopped there, it still would have been greatly appreciated, but it's within the discussions of these titles that the brilliance of this book shines through.  Russell's idea here is

"not just to discuss the books, but to explain what they have meant to me over time, thus forming an oblique, partial memoir of my life."

He is overwhelmingly successful on both fronts.

As most memoirs do, Russell begins his journey here in childhood, during which he had no particular awareness of "a point" at which he'd "started to collect books," but he does remember the discovery of a  nearby junk shop with "several shelves of tatty books for sale," where he used to spend his pocket money.   With the discovery of The Outsider by Colin Wilson at age fourteen he'd started buying books by authors Wilson had included in his work; by then, as he notes, he  realized at that point that he'd become a collector.  On then to "jumble sales, junk shops,"  and then it was the "wonderful world of second-hand bookshops."  Of these, he can remember details about the shops themselves,  including such proprietors as a certain Mr. Brookes, who first introduced him to Arthur Machen's excellent The Hill of Dreams, after which he was asking for (and growing frustrated when he was unable to acquire)  books by Arthur Machen "in every bookshop I could find."  Later, Russell would hear from a friend about the "newly formed" Arthur Machen Society, making his way to the society dinner where he "met friends who helped to shape my reading and publishing life..." making "a greater number of lifelong friends on that one weekend than at any other time."  His adventures with the Society (and a rather haughty character known here as "Mrs. X") continue on across many chapters, eventually culminating in the story behind the creation of the Friends of Arthur Machen, still in existence.    And on his way to the present, he reveals how Tartarus Press got its start in 1990 with Russell's "guide to Arthur Machen's favourite pubs," The Anatomy of Taverns, photocopied by his partner Rosalie Parker, while he "folded, collated and stapled."   There is, of course, much more, but at this point I'll leave the rest to potential readers to discover and delight over.  I will add only that there are parts of this book that made me laugh out loud.
As to the books under discussion here, the list is not only eclectic but as you read through each chapter, it is more than obvious that they are also meaningful in a deeply personal way.  The fact that he begins and ends this book with a chapter entitled "The Outsider" (two different books) seems to reinforce that idea as well.   Some of these titles, as he notes, "have never been well enough known for them to be subsequently 'forgotten',"  although "just as many have always been appreciated ..."  I have to admit it was a bit strange to see Andrew Hurley's The Loney on the list, a book I've been an advocate for since I read it not all that long ago.   Russell also notes in his introduction that his title is "more of a challenge or invitation to readers to determine how many of these works they remember."  Taking him up on that challenge, out of the fifty books listed in the table of contents, I've read fifteen, I have eight that I own but haven't yet read,  and I bought three before I'd even finished reading Fifty Forgotten Books.  So twenty-three are here in my house as of this moment -- not quite at the fifty percent level but close, with the upcoming delivery of the three I purchased tipping things over that line.  Of course, this doesn't begin to count the books he mentions outside of those fifty, and when I have some time I'll be going back through those happily making another list.
I have had the great pleasure to have read more than a few fictional works written by this author (I'll be starting Heaven's Hill here shortly),  and I realized long ago just how very talented a writer he is, so I'm not surprised that he carries that quality over into Fifty Forgotten Books.   Each book the author includes in this volume elicits particular memories over different times in his life encompassing his reading,  the joys of secondhand bookshops and booksellers, book collecting, the people he meets and more, recounted by someone who is obviously deeply passionate about all of the above.   While I enjoyed reading about each title presented by the author in this volume, it's the autobiographical writing that makes Fifty Forgotten Books so engaging and in my humble opinion, exceptional.
I'm just a reader, not a critic, but I know when I have something extraordinary in my hands, and this book definitely falls into that category.  Very, very highly recommended.
Posted by NancyO at 11:02 AM No comments: