Death in Mud Lick: A Coal Country Fight against the Drug Companies That Delivered the Opioid Epidemic, by Eric Eyre 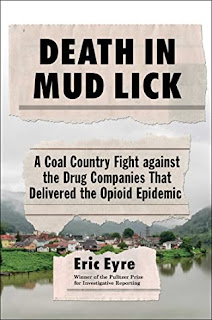 Even after being diagnosed and beginning treatment for Parkinson's in the midst of it all, the author of Death in Mud Lick, Eric Eyre, stuck to his guiding principle of "sustained outrage" as he continued to investigate and to report on the flooding of opioids into West Virginia, ultimately winning a Pulitzer in 2017 for his hard work. The word dogged doesn't even begin to describe his determination to get to the truth.   At the same time, this is not just another book on the opioid epidemic -- here we are provided with an intense scrutiny of what goes on behind the scenes of a number agencies which are supposed to be regulating the flow of these powerful drugs to safeguard the population. What happens here is real, it is not at all pretty, and if you had to choose only one book on the topic, this would be the one.


Five years before his death, William "Bull" Preece fell off of a ladder while working at the Penn Coal Mine in West Virginia.  The resulting back injury led to a prescription for pain pills; when that prescription ran out, he would find doctors who would give him more OxyContin and Lortab, and two years after his accident, his older sister Debbie realized that he was addicted.  While she tried to help him, including getting him into rehab, and while he tried to help himself at a methadone clinic, the pull of the pills was just too much.  Eventually he died of an overdose in 2005.  Debbie was left with several empty prescription bottles with their labels still intact:

When Bull died, his autopsy revealed that he had "five times the lethal limit" for oxycodone in his blood, and the case was closed after his death was ruled an accident.  For Debbie, however, someone had to pay.  She hired attorney  Jim Cagle, and by the summer of 2007 they filed a wrongful death lawsuit against a doctor who had written Bull's prescriptions, and also against the local pharmacy that filled them.  Had this been the entire story, it would have been interesting enough, but this is just the jumping-off point for what follows.  As it turns out, Debbie Preece, who had had her own previous trouble with the law, and her attorney had missed an important part of the opioid epidemic, the distributors who were responsible for the flow of the drugs into the area.

Enter reporter Eric Eyre, who covered the state government, who had heard newly-elected state Attorney General Patrick Morrisey  (the "first Republican attorney general in West Virginia since 1933")  was about to kill off a lawsuit "on behalf of the citizens of West Virginia" that his predecessor had filed against "Cardinal Health, Amerisource-Bergan, and a dozen other prescription drug distributors" responsible for flooding the area with an overabundance of opioids.   Eyre was also "tipped off" that Denise Henry Morrisey, the wife of the the new AG, had served as lobbyist for Cardinal Health since 2002.  Making things even more interesting,  Patrick Morrisey had himself been a lobbyist for "two trade groups" that represented Cardinal and a couple of other distributors. Regarding the lawsuit, it seems that Morrisey did not want the two attorneys the former state AG had appointed to prosecute the case, preferring to have his own attorneys instead.  One of these attorneys just happened to be Jim Cagle, the same lawyer who had earlier worked on Debbie Preece's behalf.

Death in Mud Lick puts an eagle-eyed focus on Eyre's efforts to gain information from not only the huge and powerful drug distribution firms, but also from various government officials and government agencies, and reveals how Morrisey in turn set out to "derail" Eyre's investigation.  Just reading this book frustrated me to no end -- not because it is bad (because it is most certainly not), but because, as Eyre writes in the preface,


"As the addiction crisis spread across the country, some health advocates sounded the alarm, but industry lobbyists snuffed out policymakers' efforts to stop the scourge. They found politicians willing to do their bidding.  The regulators -- the DEA, the pharmacy board -- failed to do their jobs. Pablo Escobar and El Chapo couldn't have set things up any better."

I am a natural cynic and even I was shocked at what goes on behind the scenes to protect not the citizens of this nation but rather the ultra-lucrative pharmaceuticals industry.  I am a huge believer in the power of investigative journalism done the right way, and I have to say that Death in Mud Lick is one of the best books I've read on this subject.  After what he went through during the course of his investigations, Mr. Eyre deserves all accolades this book may receive.

Posted by NancyO at 2:28 PM No comments: