White Trash: The 400-Year Untold History of Class in America, by Nancy Isenberg 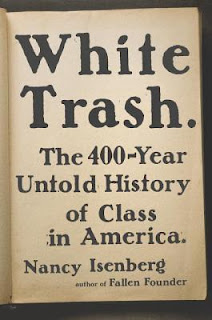 hardcover
(my copy from the publisher - thank you!)

"If the American dream were real, upward mobility would be far more in evidence."

White Trash: The 400-Year Untold History of Class in America is certainly one of the most informative books American history books I've read this year; quite frankly it was an eye opener.  If someone had told me that Thomas Jefferson referred to the white underclass of his own time as "rubbish" I probably wouldn't have believed it, since he's revered as a founding father of this nation.  But he actually did use that label, and he wasn't the only founding father or American politician to use that sort of term to describe the "wretched and landless poor" that have been part of our history and our culture since this country began.  And that's just for starters.  But that's the point here -- as the dustjacket blurb reveals, the author


"explodes our comforting myths about equality in the land of opportunity, uncovering the crucial legacy of the ever-present poor white trash."

She also, as she says in this interview, hopes that


"readers, pundits and politicians will stop repeating the tired myth of the American Dream and appreciate instead that the dismissal of the poor has been a crucial and consistent part of US history. Until we fully comprehend the past, our country will continue to paper over class division with empty rhetoric. For whether we like to acknowledge it or not, the history of "white trash" lies dangerously close to the heart of our deeply conflicted, long-ignored class politics."

And quite frankly, if ever a time we see this in action, it is definitely now coming up to this year's presidential election, which makes this book extremely timely. So now for the nutshell summary:

Isenberg poses the following question in her book:


"How does a culture that prizes equality of opportunity explain, or indeed accommodate, its persistently marginalized people?,"

and it is this question, answered through an examination of an incredible array of source material, that is the focus of this study. As the dustjacket blurb notes, "white trash have always been near the center of major debates over the character of the American identity," and here she examines just how this has been the case over the last four hundred years. She does this by careful examination and analysis of several sources in contemporary politics, literature, scientific theory and various policies at different moments of America's history.

Class is, as the author notes "the most outstanding, if routinely overlooked element in presuppositions about early settlement." It was mainly land ownership that perpetuated class distinctions, since it "was the principal source of wealth." Those on the margins without land "had little chance to escape servitude."  As this study also reveals, "The white poor have been with us in various guises" throughout our country's history.  The United States didn't even exist when some British notables began to classify the idle and "wandering" poor as  "human failure" and proposed exporting them to the New World, even going so far as to refer to the poor as "waste people," encompassing indentured servants, slaves, convicts, and men weighed down by debt. As settlement continued, the definition of "waste people" went on to include the landless poor, causing  a "stigma" that would "leave its mark on white trash" throughout our history.

Revered figures such as Washington, Jefferson, Franklin, Thomas Paine, John Adams and other founding fathers can take their own share of the blame for perpetuating class divisions. For instance,  Washington thought that the foot soldiers in the Continental army should consist only of "the lower class of people," while Jefferson was more harsh, describing public education as mainly for the benefit of students "raked from the rubbish." Even John Adams felt that it was natural for people to have a "passion for distinction," with his idea that "There must be one, indeed, who is the last and the lowest of the species." Poor whites have also been relegated to the status of their own particular, separate  "breed," as a means to marginalize these people so that the concept of equality and class could be maintained. As the author comments on this issue, she notes that "If whiteness was not an automatic badge of superiority ... then the ideals of life, liberty, and the pursuit of happiness were unobtainable."

As she explains the historical circumstances behind all of this, we also learn that referring to these groups of people in terms that reiterate and reinforce the poor as "waste" has continued over four centuries:

She also reveals that somehow their socioeconomic condition has long been thought by those outside of this group as being their own fault. They have been blamed for perpetuating their own bad "breeding," which along with pitting the white underclass against newly-freed slaves, was a factor used by later proponents of eugenics to bolster their positions. But even worse, they have been


"blamed for living on bad land, as though they had other choices. From the beginning they have existed in the minds of rural or urban elites and the middle class as extrusions of the weedy, unproductive soil. They are depicted as slothful, rootless vagrants, physically scarred by their poverty. The worst ate clay and turned yellow, wallowed in mud and muck, and their necks became burned by the hot sun. Their poorly clothed, poorly fed children generated what others believed to be a permanent and defective breed.  Sexual deviance? That comes from cramped quarters in obscure retreats, distant from civilization, where the moral vocabulary that dwells in town has been lost."  (320)

And finally, another key point in this book, is that "Each era had its own means of distancing its version of white trash from the mainstream ideal," and that


"the discomfort middle-class Americans feel when forced to acknowledge the existence of poverty highlights the disconnect between image and reality."

In the same interview noted at the beginning of this post,  Isenberg states that


"It is difficult for Americans to talk about class because it contradicts our myths and rhetoric about the promise of the American Dream. Americans celebrate the abstract notion of equality, but history tells us that we have never embraced genuine equality."

To me, she's hit the nail on the head with that last statement, and those who would care to argue otherwise are the ones who genuinely need to read this book.

White Trash  was very informative and I found myself going long stretches of time without being able to put the book down. This isn't a pop history for the masses sort of thing, and I would find myself repeatedly going to the back to read her notes, iPad at the ready.

I also happen to agree with many of the major points she makes here, most especially her statement that


"We are a country that imagines itself as democratic, and yet the majority has never cared much for equality... Heirs, pedigree, lineage: a pseudo-aristocracy of wealth still finds a way to assert its social power."  (316)

This is a dominant theme that carries on throughout her work, and she does prove her point over and over again.

As fascinated as I was with much of what she has to say here, I do have some issues.  My biggest problem here is when she says that "class has its own singular and powerful dynamic, apart from intersection with race." I'm not so sure I quite buy that statement as it pertains to class in America.  Second, I didn't find the book to be an actual "400-year" history per se, since a large part of her focus is on the South at the expense of understanding the history of the poor white class in other regions in this country.  It's tough to be fully comprehensive when writing a history spanning so much time, and given how intensely she makes her case for the eighteenth and nineteenth centuries, aside from a brief discussion dealing with a few modern presidents, a bit on the eugenics movement, and "white trash" in books and on television, there is little depth of discussion regarding the white underclass in the twentieth century.

Despite its flaws though, I would certainly recommend it because it is a valuable study that really does debunk some of the  myths about the idealized conception of white equality in America as well as the reality behind the American dream itself.

Posted by NancyO at 4:06 PM No comments: