Tales from the Haunted South: Dark Tourism and Memories of Slavery from the Civil War Era, by Tiya Miles 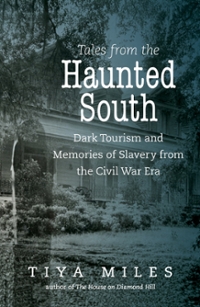 9781469636146
University of North Carolina Press, 2015
154 pp
paperback
"... let our ghosts be real, let our ghosts be true, let our ghosts carry on the integrity of our ancestors."
I seriously do not remember why I bought this book in the first place, but some nights ago I chose it from my history shelves completely at random and started to read.  I was instantly blown away and have recommended this book to any number of people.  It's that good. It's that necessary.
In 2012 Professor Tiya Miles had gone to Savannah to work on her novel; after lunch one day, on her way back to her hotel, her attention was drawn to a woman waving at her.  The woman asked if she would like to take "a historic tour" of the local Sorrel-Weed house, and Miles was "intrigued" enough by the idea of "being beckoned into history"  to buy a ticket.  As she was guided through the house, she learned the story of its owner, Francis Sorrel, a "cotton tycoon" of Haitian heritage, passing for white. Sorrel had lost his first wife to typhoid and then married her sister Matilda afterward.  As the story goes, Matilda had committed suicide "by jumping off the second-floor balcony," because she had caught  her husband and his "mistress," a "slave girl" by the named of Molly, in flagrante.   A week later, Molly herself had been found "strangled, dangling from the ceiling rafters of the carriage house," and while Francis moved to a nextdoor townhouse, Molly and Matilda remained  as resident ghosts.  The author was told that if she wanted to visit the scene of Molly's death, she could come back that evening for the "Haunted Ghost Tour,"  which she did.  In the "stillness of  that night" Miles writes that she cannot say if she "felt Molly's presence," but she did feel a "kind of call," to

"search for evidence of Molly's life in the archival rubble of urban slavery, to tell her story and redeem her spirit from the commericialized spectacle of bondage I had witnessed"

along with a pledge to "restore her memory and her dignity."  Afterwards, going through historical records, she discovered nothing at all to indicate that a woman named Molly had been owned by Sorrel; as she notes,

"Although many young women like her surely existed in antebellum Savannah and the torturous rice plantations of the surrounding countryside, this Molly was not among them. Someone had concocted her story of racial and sexual exploitation as a titillating tourist attraction."

And now, she writes, she wanted to know why Molly was "invisible in the historical record and hypervisible on the Savanna ghost-tourism scene. " She also was left with a number of questions she felt needed answering:

Why were ghost stories about African American slaves becoming popular in the region at all? And why were so many of these ghosts women? What themes prevailed in slave ghost stories, and what social and cultural meanings can we make of them? What 'product' was being bought and sold, enjoyed and consumed, in the contemporary commerical phenomenon of southern ghost tourism?"

Very briefly, because there is so much to this short but extremely complex study that I could never hope to capture here, the book begins with a look at the growth in popularity of the ghost tour, examining how haunted history has come to captivate audiences everywhere.  We live in an age in which "ghost lore has moved into myriad cultural forms" widely available on television and online; she quotes the editors of the book Popular Ghosts  who note that "we appear to live in an era that has reintroduced the vocabulary of ghosts and haunting into everyday life."    In the American South, as Miles notes, the "surge in haunting tales has taken on a particular cast, and often features spirits who are said to have been slaves."
In her journey to find the answers to the questions posed above, the  author took part in several ghost tours in the South, and the book takes us through her experiences at three of these -- the Sorrel-Weed House in Savannah,  the New Orleans home of Delphine Lalaurie,  and The Myrtles Plantation in St. Francisville.      As the back-cover blurb reveals,  the guides of these tours, "frequently promoted and experienced at plantations, urban manor homes, and cemeteries throughout the South"  often rely on "stories of enslaved black specters,"  in which their

Professor Miles'  work highlights the commonalities which she discovers in each tour, discerning a particular, overall pattern while examining and analyzing the ways in which this industry appropriates a number of elements of African American culture.  These tours  borrow the experiences of enslaved people which are  "boiled down to an exotic essence, and sold for a price," while the "black history material" Miles encountered was  "romanticized or decontextualized."  While violence is part and parcel of the "signature tales" of these places, what is presented is done in such a way as to trivialize the actual brutality endured by enslaved peoples, especially women;  the tourists are offered "narratives that temper the history of slavery and race relations, assuage guilt, and feed fascination with the racialized other."  In this way history becomes sanitized, kept at a "safe" distance from the ghost-touring public.  The reality is though that far from a means of entertainment, the ghosts of enslaved peoples are "deadly serious messengers from another time that compel us to wrestle with the past,"  one that is "chained to colonialism, slavery, and patriarchy but a past that can nevertheless challenge and commission us to fight for justice in the present."
It is impossible to miss the author's passion for her subject;  writing it in the first person not only  highlighted that particular aspect of this book, but also made the reading less daunting than a regular textbook and more like I was actually along for the ride as she made her journey. Tales of the Haunted South is not only an important, interdisciplinary study,  it should be required reading for our time and absolutely should not be missed.
Posted by NancyO at 3:50 PM No comments: