Labyrinth of Ice: The Triumphant and Tragic Greely Polar Expedition, by Buddy Levy 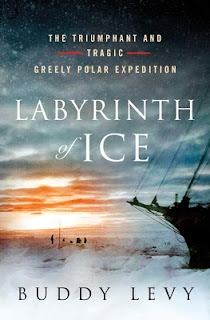 advanced reader edition, so my many thanks to the great people at St. Martin's Press for a paper copy.

I was delighted to have been offered a copy of this book, since I am and always have been a serious devotée of exploration narratives of all kinds, most especially accounts of expeditions in the polar/Arctic/Antarctic regions.  Another factor in saying yes to St. Martin's Press was that it wasn't all that long ago that I'd watched this fascinating story play out on  American Experience (PBS)  in an episode called "The Greely Expedition" and decided that I had to know more, so of course of I was going to accept their offer.  Smart decision on my end:  once I began reading  Labyrinth of Ice a couple of nights ago at about 6:30 p.m., I didn't  stop reading until  two in the morning, and only then because I had to be up by 5:30.

According to the author,  "Like nearly all great stories from the past," the story in this book has already been told,  but he intended this book to


"provide an interpretation that focuses on the adventures, triumphs, and the unity, brotherhood, and patriotism of the men"

which he does, but he also doesn't skimp on the strength and fortitude of these people required for their very survival.  When this expedition began in 1881, not a single person under Greely's command would have been able to visualize the horrific challenges that would face them only two years later, when things became so dire that the expedition's doctor wrote in his journal while drifting on an ice floe that


"It is terrible to float in this manner, in the snow, fog, and dark. This seems to me like a nightmare in one of Edgar Allan Poe's stories."

When  Lieutenant Adolphus Greely accepted his mission, he knew after years of studying the history of Arctic exploration that things didn't always go as planned.   However, he ran a tight ship, so to speak, and as the author notes, he also had an "uncanny sense of the thing to do now."  His orders were to  set up "the northernmost of a chain of a dozen research stations around the Arctic," as part of the first International Polar Year,  and to endeavor to locate and rescue the men of the long-missing USS Jeannette, the subject of Hampton Sides' most excellent book In The Kingdom of Ice.  Greely also had designs on reaching the North Pole, or failing that, at least to wrest the claim of reaching "Farthest North" from the British, who held the record.  Sailing from Newfoundland, the men reached their destination of  Fort Conger "more than 1,000 miles north of the Arctic Circle," or as the author says, "quite literally at the far end of the earth."


While Labyrinth of Ice covers their two years there, the real story begins in 1883, when for the second year in a row, "relief-resupply" ships failed to reach these men as scheduled.   When the first summer went by in 1882 with no relief ship arriving, Greely and his men were still well provisioned, so the situation wasn't dire, but when the summer of 1883 began to draw to a close with no relief in sight, his orders were to


"depart with his men and head south, using the motorized launch Lady Greely and three whaleboats, plus a dinghy. They would retreat, scouring the shores, hoping to find food caches or relief ships and men along the coast of Ellesmere Island as far south as Cape Sabine, or at Littleton Island, both some 250 miles south of Fort Conger."

Greely and his men could remained at Fort Conger where, "if well rationed," they would have enough provisions to last another year, but he would never have considered disobeying his orders.  He was supposed to leave by September 1st, but fearing the ice, he made the decision to leave nearly a month earlier on August 9, 1883, thus beginning an ordeal which pushed his leadership and his men to their limits.     The story of the southward journey of  Greely and his men is indeed harrowing, but what makes it even worse was that had there not been so much negativity in Washington DC about Arctic exploration under the auspices of Secretary Robert Todd Lincoln, and had the people in charge of the relief expeditions carried out the parts of their mission that they could have actually fulfilled, things may have been much different in the end.

Levy has done a remarkable job with this slice of American history, and as I said earlier, I had to keep reading it despite the fact that I lost nearly an entire night of sleep doing so.  I didn't find it "dry," as some readers said they did; au contraire, it held my attention the entire time, and it is perfect for people who don't read history as part of their regular lineup.   I have only one complaint, which is that there were so many times I wanted to know the source of a quotation or something he mentioned and there were neither footnotes nor endnotes.  I have an ARC, so perhaps they are put into the final version, so if that's the case, disregard.  I happen to be one of those geeknerds who actually goes to the notes for enlightenment so in that sense, the lack of citation was disappointing.  And just one more thing: I'm not exactly sure why he chose to use Dan Simmons' novel The Terror as a source; frankly, it just seems weird.   The book as a whole, though, is so good and so well done that in the grander scheme of things, I can certainly and highly recommend it to anyone interested in Arctic exploration -- it is truly an unforgettable story that the author has put together here and I can only imagine the amount of time he put into piecing it all together.

Posted by NancyO at 4:36 PM No comments: