Three Minutes in Poland: Discovering a Lost World in a 1938 Family Film, by Glenn Kurtz 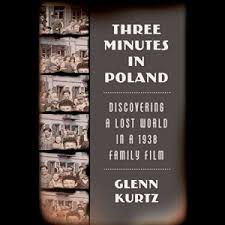 Three Minutes in Poland is a stunner of a book that anyone even remotely interested in the Holocaust should read.

David and Liza Kurtz returned from a six-week European vacation in 1938.  Seventy-one years later, their grandson Glenn discovered some old film cans in his parents' closet.  Luckily, some of those films had been transferred to video, and Glenn starts to watch one labeled "Our Trip to Holland Belgium Poland Switzerland France and England." He discovered three minutes of footage shot during the grandparents' time in Poland, a place that his father and his aunt named as Berezne, where David's grandmother was born. These three minutes show "a vibrant Jewish community in the summer of 1938," but by the end of the war, only 150 Jews out of 3,000 from Berezne had survived.   The original film, badly deteriorated,  was handed over to the Holocaust Memorial Museum where it was sent out for restoration.  With a copy of a DVD of the footage in hand, Kurtz went to visit a distant cousin of his grandmother's, who watched the film and "within a second," revealed to Kurtz that the segments in Poland had not been shot in Berezne.  Glenn realizes that the film was more likely shot in Nasielsk, his grandfather's home town thirty five miles northwest of Warsaw.  The Jews in this town had their lives turned upside down in 1939, just one year after his grandparents' visit; the majority of them met their fate in Treblinka in 1942.  Only eighty of them survived.  A conversation with one of these survivors led to a positive identification of the town as Nasielsk, and Kurtz began a thorough search for any information about the people who had lived there.

While he is spending time in libraries, museums, archives etc., someone else who is digging through historical records comes across Kurtz's film online at the Steven Spielberg Holocaust Archive.  He sends a link to family members and one of them, while watching the footage, recognizes her grandfather as a boy.  From there Kurtz meets Morris Chandler, who became invaluable to Kurtz. Not only does Chandler have his memories, but Chandler also provides Kurtz with connections to survivors who are still living. From that meeting on, Three Minutes in Poland becomes a story of how Kurtz begins to piece together people's lives in Nasielsk, his grandparents' visit in 1938, and what ultimately happened to the Jews who lived there, as their last days approached starting in 1939.   As Chandler says,


"It's looking back and saying, Yes, there was a world. Other than what we have lived all these years, knowing what happened. It was a real word there. I mean, people were going about their business. Kids were running, and doing all the things that kids do. And here I look at myself, and I see it was a happy face."

But he also notes


"I was never a child. I mean, right after this, the whole thing started, and I became an old man of fifteen, sixteen, seventeen."

If you watch the film, Kurtz comments there that this three minutes of footage and Chandler's memories, "brought the town into memory again as a place of life instead of just a place of death." Considering what happens only one year after it's shot, it's a beautiful and fitting sentiment. Three Minutes in Poland is filled with survivors' stories -- and every time another connection was made, it became


"a small remnant of the web of interrelations that exists in any town. Before its destruction, the town itself -- its culture, its gossip, its physical life -- had held these connections."

The film becomes "the medium that brought the pieces together, unexpectedly creating a new kind of community," and as the blurb notes, this three minutes "became the most important record of a vibrant town on the brink of extinction."

It is a stunning, beautiful and eerie book, to be sure, and I am already thinking of a number of people to whom I'm going to give a copy.  It is a detective story of sorts, one that takes its readers back to a time of great loss, but also into the vibrant lives of real people. The author's passion shines through on every page, and it is so well written that even without the photos that are scattered throughout the book, I could visualize things in my head very clearly. When you read a book like this one, you will never forget it.