My Dark Places, by James Ellroy 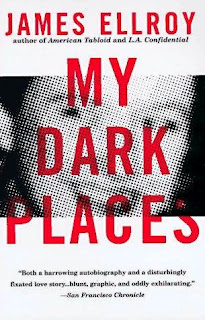 9780679762058
Vintage, 1997
424 pp
paperback
Last year I read Ellroy's LA Quartet, the opening novel of which is The Black Dahlia.  In that book, as the author noted in his afterword, a "personal story attends the Black Dahlia," inextricably linking him to "two women savaged eleven years apart."   One of these women was his mother, Geneva (Jean) Hilliker, who was killed in 1958, her murderer unknown and her case never solved.  The other, of course, was the real-life Black Dahlia herself, Elizabeth Short, whose story Ellroy had read as a boy in Jack Webb's The Badge "a hundred times" and who not only became his "obsession," but also a "symbiotic stand-in" for his mother. My Dark Places tells that "personal story," which began when the author was ten and arrived home to discover that his mother was dead; it also explores his own unique relationship to her memory and how it changed over time.   It was her murder that shaped who he ultimately became; here he lays his demons bare for all to see.   Completely misquoting Bette Davis in All About Eve, fasten your seatbelts -- you're in for a bumpy ride.
The body of Jean Hilliker Ellroy was found on Sunday, June 22, 1958 in a small strip of ivy at King's Row and Tyler Avenue in El Monte, California.  The first part of the book details the crime from that point,  using a third-person point of view to tell the story, recreated from the records of the original investigation.   After the victim had been discovered, her car had been found behind a local bar where she'd spent time with two other people, a blonde woman with a ponytail and a man who came to be known as "the Swarthy Man," both unidentified.  From there her whereabouts were traced (sans the blonde) to a local drive-in, where a carhop put her with the Swarthy Man in his car twice that night.  After that, despite tracking any and every lead they had and interviewing a number of witnesses and possible suspects,  law enforcement lost their trail and the case went cold, or as Ellroy puts it, "moved into limbo."   In Part Two, Ellroy delves into his past, detailing his somewhat complicated relationship with his mother and after her death, his life with his father.  As a kid, he knew his mother drank and brought men home, and even before her death was told by his father in no uncertain terms that she was a whore.  After she died, he went to live with his father where he was left largely unsupervised and subject to his father's rants on race and women.  Ellroy's life began to spiral downward during this time -- school left him feeling like he didn't fit in, he started using drugs, broke into houses, shoplifted, stalked girls and did some pretty horrific things for attention; as he got older and his dad's health deteriorated so too did Ellroy's mental state.   As he noted when young, "My mother's death was a gift -- and I knew I had to pay for it."  While very likely the most difficult to read because of the racism and misogyny, it is staggeringly honest, and for me the strongest section in the book.  As I said to one of my goodreads friends, while reading this part I said out loud that this man was an effing pig, but after learning about his life with his father, it came as absolutely no suprise.  It was also at this point in his life that his obsession with Elizabeth Short began, and as he said in Black Dahlia, the time when "Jean Hilliker and Betty Short" became "one in transmogrification."
Part three introduces Bill Stoner, a homicide detective with the LA County Sheriff's Department, the man who in Part four helps Ellroy to tackle his mother's case, beginning in 1994.  Stoner was no stranger to murdered women as Ellroy discovered; their cases are offered here in mesmerizing detail as well as Stoner's own obsessions in trying to solve them and put their killers behind bars.  As was the case with Ellroy who at thirteen knew that "dead women owned me," the same might be said for this man over the course of his career.    It was Stoner who first showed Ellroy his mother's file, then stayed with him as they re-interviewed old witnesses and tracked down possible new ones, solicited new leads, and put out as much publicity as possible in the hope that anyone from 1958 might come forward.
I won't say I threw myself into this book; as was the case when I read his LA Quartet, it's more like I fell down the rabbit hole after getting sucked into it. It was impossible not to, actually -- even though this book is a work of nonfiction, reading My Dark Places had much the same effect on me as those four novels did.  It is real, it is raw, and while as I said earlier it is beyond difficult to read, it is yet another fine piece of work by one of my favorite writers.  Overall, though, it is, as the back-cover blurb so rightly describes, the story of a man who spent some three decades running from his mother's ghost, trying to "exorcize it through crime fiction," and a man hoping for some sort of redemption.
Definitely not for the faint of heart, but to Ellroy fans, a book not to be missed.
Posted by NancyO at 3:03 PM No comments: