No Surrender: My Thirty-Year War by Hiroo Onoda 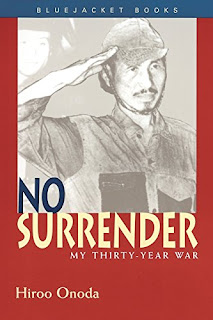 9781557506634
Bluejacket Books/Naval Institute Press, 1999
originally published 1974
translated by Charles S. Terry
paperback
219 pp
I bought this book last year when I read that Werner Herzog had written a novel based on the strange story of Hiroo Onoda, author of this memoir and a soldier in the Japanese Army during World War II.   I've now read both books -- this one and Herzog's The Twilight World, and I've watched the film Onoda: 10,000 Nights in The Jungle which premiered at the Cannes Film Festival in 2021.  Evidently I couldn't get enough of this man's story -- it seems that indeed, sometimes truth is even stranger than fiction.
It was 1942 when Onodo was called up for his army physical; in December of that year he reported to the Two Hundred Eighteenth Infantry Regiment.  After a brief time  in Nanchang, he took and passed his officer examination, eventually ending up at the Futumata branch of the Nakano Military school where he was taught how to engage in secret warfare.   In October 1944, American forces landed on Leyte; Onoda and forty-two other trainees were told they would be going to the Philippines.  First, though, he would have a bit of leave, which he spent at his family home; ironically, as it happens, on leaving to report back to the army he told his mother that if she is informed that he had been killed,

"don't think too much about it, because I may well show up again after a few years."

Given what happened with this man, that turned out to be an understatement.  Onoda was assigned to Lubang Island, to "lead the Lubang Garrison in guerrilla warfare."    The objective: "to hamper the enemy attack on Luzon." Onoda was directed to destroy both the airfield and the pier at the island's harbor; he was further tasked with destroying enemy planes and killing the crews "should the enemy land" there.   His final orders, however, were that he was "forbidden" to kill himself:

" It may take three years, it may take five, but whatever happens we'll come back for you.  Until then, so long as you have one soldier, you are to continue to lead him.  You may have to live on coconuts. If that's the case, live on coconuts! Under no circumstances are you to give up your life voluntarily."

The situation on the island, for many reasons, started to go south almost immediately.  By December of 1944 when Onoda arrived at Lubang, the tide of war had already started to turn in favor of the Allies and it was so grim that people back home in Japan were already bracing for enemy forces to land in their country.   The "best outfit in the whole Japanese army" on Lubang weren't really up to fighting; they just "wanted to get off Lubang" and Onoda was hampered by the officers who refused to listen to him or to allow their soldiers to help him in his mission because they were "too busy."  In one garrison, only half of the men were actually fit for work, the others sick and plagued by fatigue; newly-arriving soldiers failed to bring food with them and had to share in what little resources were available. As he notes, the five-month supply of rice would likely last for two months at best.   He wrote that the troops he was supposed to be leading were "a bunch of good-for-nothings, concerned with only their immediate wants," and he had no authority to set them straight.  With all of this (and much more) going on, Onoda couldn't convince anyone of the need for guerrilla warfare; even worse, when the Americans came to Lubang, they captured the airfield Onoda had been ordered to destroy.
Fast forward to October of 1945, when Onoda received word via a piece of paper on which, written in Japanese, was a statement that "The war ended on August 15," and that the Japanese soldiers should "come down from the mountains."  Onoda believed none of it, thinking it was an enemy ploy, and later at  the end of the year, leaflets dropped from a B-17 offered copies of the surrender order from General Yamashita as well as a directive from the chief of staff.  Once again he refused to believe what he was reading, deciding that these were "phony."  These messages continued, and in every instance Onoda decided that it was the work of the enemy, that they were being tricked via propaganda into surrendering.  By 1946 he was down to just four men, all of whom vowed that they would "keep on fighting."  It wouldn't be until 1974 that he stepped out of the jungle, once he had word from his commanding officer that Japan had indeed surrendered and that he was ordered to return home.
In the meantime, his little group of four became just one, with Onoda the only one left standing.  His story reveals how he tried to do his best to continue his original mission while trying to survive in the jungle of Lubang Island, not an easy feat by any stretch.  By the time his band of soldiers came down to just his comrade Kozuka  and himself,  Onoda says that they had "developed so many fixed ideas" that they were "unable to understand anything that did not conform to them."   He stood firm in his tenacity and his commitment, not just to his mission but also to his firm belief that there was absolutely no way that Japan could have lost the war, let alone that his country's government had surrendered.    It would only be after he was on board the helicopter that would take him home in 1974 that he would finally question his time in Lubang, asking "Who had I been fighting for? What was the cause?"
At the same time, it is important to remember that this is Onoda's story as told to a ghostwriter  and it is likely incomplete.  As so many readers have been quick to point out, it says nothing about the crimes the Japanese on Lubang perpetrated against the people who lived there.  At a website called Rare Historical Photos, the writer discussing the photos of Onoda notes that "he and his companions had killed some 30 people in their long war" (pardoned by President Marcos), and there is also a trailer on Vimeo for a new documentary by Mia Stewart called "Searching for Onoda" in which she turns to her family on Lubang to express how Onoda's war affected the island's people.   I can't find any information about when this documentary will be available to the viewing public, but I definitely plan to watch when it is released.   And there's this: according to an article I read at the BBC's Culture page,  the ghostwriter of this book, Ikeda Shin, published his own account, Fantasy Hero, in which he felt "it was his responsibility to inform the public that he believed Onoda was not a hero, nor a soldier, nor even a brave man."
I had a lot of  trouble putting it down once started and every time a new announcement would come for Onoda about the war being over, I was just floored by his logic as to why he refused to give up.   I would also definitely recommend reading No Surrender if you are planning to read Herzog's book or if you're thinking about watching the film based on his book just so you have some background.  However you choose to view Onoda in light of the criticisms against him, the book still makes for great reading, and it's one I definitely recommend if you're looking for something well out of the ordinary.