A Furious Sky: The Five-Hundred-Year History of America's Hurricanes, by Eric Jay Dolin 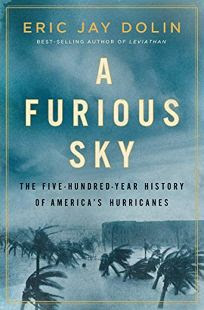 
As someone living in South Florida, about a third of a mile as the crow flies from the coast,  reading this book during a very active hurricane season may not have been the brightest idea in terms of mental health.  I needn't have worried: it was so well done that I found myself completely engrossed almost immediately.    As it turns out, all is not doom and gloom here -- as the dustjacket blurb reveals,  it is a melding of


"American history, as it is usually told, with the history of hurricanes, showing how these tempests frequently helped determine the nation's course."

From the beginning, the author acknowledges that in writing the "history of the American hurricane," this book must be "selective," given that there have been  quite possibly "more than a thousand" of them over the past five hundred years. Among the individual hurricanes discussed throughout the book,  found here also is a history of meteorology,  which Dolin notes is "intriguing, and at times rather nasty,"  the "influence of hurricanes on the course of empire, the outcomes of war," "critical innovations in communication, aviation, computer, and satellite technology," and he examines how


"the history of American hurricanes forces us to confront thorny questions of how we can learn to survive and adapt to the continued barrage that is sure to come from the greatest storms on Earth."

Beginning with Columbus, the author moves forward through time as he highlights various storms that had some sort of historical impact, for example two which played a "critical role" in the early colonial history of Florida, one of which kept the French from conquering the Spanish.  The 1609 storm that affected  the people of Jamestown also "left its mark on literary history" as Shakespeare's inspiration for The Tempest.  The Treasure Fleet Hurricane off the coast of Florida hit in 1715, sinking an entire fleet of ships carrying "jewels, coins, ingots, and "exotic goods" and ramped up piracy in the Atlantic.   Moving into the 20th century,  the author highlights the  1900 Galveston Hurricane that not only  killed thousands of people but also remains the "deadliest natural disaster in American history."  There's an entire chapter on "Death and Destruction in the Sunshine State," beginning with the 1926 hurricane that "battered Miami," and then the book moves on to more recent hurricanes including Hugo, Camille, Andrew and Sandy through Harvey, Irma and Maria.  As he is discussing these storms, the author adds in the technological advances over time in the areas of forecasting, weather science, and discusses the pioneering efforts of those who put themselves potentially in harm's way, for example, those people who were brave enough to fly into the eye of the hurricane itself.   Most importantly, Dolin reveals that throughout our history with hurricanes, it's not been just a matter of stories about "death, destruction, and despair," but also "charity, kindness, humor, and resilience."

A Furious Sky is one of the most compelling and seriously educational nonfiction books of my reading year so far, combining history, personal accounts, the science of meteorology, the growth of forecasting/prediction technologies, politics, and a look at the very real hazards of climate change, which has the potential to bring ever more powerful storms into our lives.   It's tough to do a broad history like this one, but Mr. Dolin's done a fine job here and the book makes for  great reading even for people like me who aren't particularly gifted in the realm of science.  Very highly recommended.

Posted by NancyO at 3:44 PM No comments: