The Mayor of Mogadishu, by Andrew Harding. Read this book. 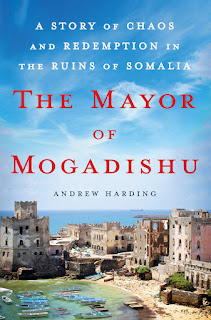 arc - my thanks to Lauren, and apologies for taking so long to get to the book.

I didn't quite know what to expect as I sat down to read this book, but The Mayor of Mogadishu turned out to be a book I couldn't put down once I'd started it.  Not only is the "mayor," Mohamoud "Tarzan" Nur," a fascinating subject in his own right, but the book also offers its readers a brief look at the history of this country, one that is probably best known by most people outside Somalia from what they've heard on the news.  But broadcast news rarely gives too much time to the people and especially the history behind these stories, hence the importance of books like this one.

Andrew Harding has chosen to focus his story on Mohamoud Nur, aka "Tarzan," a name Nur picked up while living in an orphange beginning in 1960, just as Somalia was about to celebrate its independence from colonial rule.  Nur was born into a poor family of nomads, and as a killer famine loomed, his mother, trying to save her children, had to make the choice of who to send off with relatives.Two brothers were given over to an aunt who took Tarzan and his younger brother to Mogadishu where Mohamoud was sent to the orphanage. He grew up in the city, but when the country began to fall because of the civil war, he got out and made his way over time to the UK, where both he and his wife began working on behalf of the Somali refugees.  But even there they had a lot of work to do -- while they were trying to get their fellow Somalis to come together as a community, it seems that ongoing clan rivalries continued even among those caught up in the diaspora.

The concept of clan is an important one here, and it is a huge thread that runs through this book.  As the author notes,


"Most nationalities in Africa are fairly new constructs, political experiments, colonial carve-ups roping together different religions and ethnic groups. Not so with Somalis. They speak one language. They share one religion and culture. They occupy a single chunk of territory -- albeit not all within their borders....And yet, within that Somali identity, clans matter profoundly. At times they offer the only credible source of protection and justice. At times they divide and destroy."

As the author also reveals, it doesn't end with clan -- each has a "sub-clan, or a sub-sub-clan..."  causing rifts and rivalries that would return with a vengeance once the central power structure under dictator Siad Barre collapsed.

Once the Nurs were settled in London, raising their children, getting involved etc., a phone call in June 2006 brought Nur back to Somalia, when "for the first time in fifteen years, the fighting had stopped throughout Mogadishu."  It was the Islamic Courts Union (ICU) that finally stepped in to fill in "a vacuum," and as people were tired of anarchical warlord rule, Tarzan threw in his lot with the ICU saying that "these are the right people to make peace in Somalia,...No more clan rubbish." But things went wrong when ICU's militia, Al Shabab, began "confiscating weapons, building up its private army, and waiting for the right moment to unleash a far more radical agenda."  Moderates began losing ground to militants, who "did not want a deal," but rather "wanted war."  Dividing his time between Mogadishu and England, Nur eventually ended up as the titular Mayor of Mogadishu from 2010 to 2014, and Harding's book examines his policies, his politics, and his efforts to bring a city back from the rubble. It was in 2010 that a new provisional government was formed and he was called on to be a part of it; as the author states in an interview with NPR, he was "this one man who had a few city blocks where he could experiment and make a difference."

To his credit, however, the author presents Nur not just as some sort of major hero but also examines competing views of this man since his presence sparked a major amount of controversy.  One person, for example, said of Nur that


"He's not the most technocratic guy. He's not someone who understands civil service reform, or how to build up local government. But maybe he was a perfect fit. Mogadishu needed a pioneer, a rookie, a rough, hard man. Someone to hold public rallies and talk about sensitive issues. Someone to pull the masses out of despair."

He was also accused of major corruption, of bringing problems to Mogadishu with the return of people who'd been part of the Diaspora, and at one point after having been fired as mayor,  he even says to the author that "anyone against me is a bad person," and that "Whoever is on my side is in the right. Whoever is against me is wrong."  He is evidently a figure about whom people will have to make up their own minds, but however he comes out in the historical record, he's a man worth reading about.

What makes this book so compelling is not just Nur's story, but the fact that the author, who's been in Somalia and Mogadishu a number of  times, really gets that it's important to get past the stereotypes by getting into the history of this area and the history of the people here in order to try to gain an understanding.  He makes no bones about describing misguided foreign policy based on a lack of cultural knowledge that actually may have helped with the current state of affairs in a less than positive way.  It's a book that people really need to read because, as I said, those who depend solely for the nightly news are only getting the very tip of the iceberg, possibly making faulty judgments on an entire people without really knowing anything about them. As this is becoming more prevalent nowadays, books like this one which inform but also reveal much compassion are absolutely necessary these days.

As I said earlier, I had no idea what to expect from this book, but I'm very impressed and highly, highly recommend it to anyone.