simply unputdownable: Dead Wake: The Last Crossing of the Lusitania, by Erik Larson 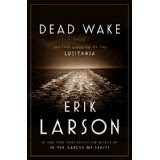 My huge thanks to Library Thing's early reviewers' program for selecting me to read this book. I figured I had the proverbial snowball's chance in hell to win this book, since there were hundreds of people requesting only 15 or so copies.  I had even preordered the book betting that I wouldn't win. I'm not cancelling that order now; I know this is a book I want to read again.

On May 7th, 1915 at 2:10 pm GMT, a single torpedo fired from a German U-boat slammed into the passenger liner RMS Lusitania; by 2:28, the ship was completely gone.  Okay, so that's old news -- everyone who's ever taken US history in school has at least been introduced to this information, normally related as one of the events leading up to neutral America's entry into World War I. [That's not quite the case, as it turns out -- America wouldn't start sending ships and troops over to Britain until two years later.]   So if this is a story that's already been told, why read about it again?  The answer is simple: it's written by Erik Larson, and it is darn-near perfect. And although I will always rank his Isaac's Storm my favorite of all of his books, this one comes very close.

Mr. Larson sets up his account on a day-to-day basis, covering not only what's happening on board the ship during its voyage from New York to Liverpool,  but he covers what's going on in London, Washington DC, and occasionally Berlin. He also presents the unique perspective of the commander of the U-20, who ultimately gave the order to launch the torpedo that sunk the Lusitania.  He brings together and explains a "chance confluence of forces" that led to the sinking, beginning in New York the day of the Lusitania's departure.  He also reveals the story of the very hush-hush "Room 40," and how this secret "holy of holies" run by Winston Churchill had information regarding U-20 that somehow failed to be provided to the Lusitania's captain, which in hindsight would have saved hundreds of lives.  All of this is related in an account that grabs the reader's attention from the very beginning, then in Larson's very capable hands, builds little by little, gaining in suspense and tension all the way through to the end.  I mean, come on ... we know the ship sinks ... it's the getting there and the unfolding of all of the "confluence of forces" that kept me hanging onto each word.  Larson also discusses the events that came afterwards from the points of view of the Germans, the British and the Americans, up to two years and one day after the Lusitania went down along the coast of Ireland.   And if the historical parts fail to impress,  there are the personal stories of the passengers who survived this ordeal -- some of whom actually saw the torpedo coming straight at them while they were out on deck.


There's just something about the word "Lusitania" that has stirred the public imagination for years. It's been widely written about,  and its sinking has sparked long-standing controversy over what was in its hold or whether or not the British purposefully failed to protect it as a means to force America into the war.  Larson has picked a great topic here and he makes it very easy for anyone to understand not only the sequence of events both before, during and after the Lusitania went down, but also the significance of this event on the wider world stage.  He has done a tremendous amount of research for this project as revealed by his sources both primary and secondary, and provides notes in the back of the book for easy reference. He also mentions the help of Michael Poirier, who himself has done immense amounts of research on the Lusitania and other ocean liners, a name I was quite happy to see cited here -- if anyone knows his stuff, it's Poirier.  The reader does not need to have any sort of background in history nor does he or she need to know anything at all about the Lusitania to enjoy this book -- everything is so well explained here that you could absolutely hate history before going into Dead Wake, and come out a huge fan of this little slice of it. My biggest issue with this book is that I don't understand why he felt the need to include Woodrow Wilson's ongoing courtship of second wife Edith, a topic that took up way too much space and almost made Wilson's role as president superfluous until the events of 1917 that ended American neutrality.

I am so happy to have read this book -- and it certainly was an eye-opener for me.  There is so much going on here, but as always, Larson keeps tight control over the material making it flow like a novel.  I am also happy to recommend it to anyone who is a regular Larson reader or anyone even remotely interested in the topic.  To use an old cliché, I could not put this book down -- it's that good.
Posted by NancyO at 4:08 PM 3 comments: