Poisoner in Chief: Sidney Gottlieb and the CIA Search for Mind Control, by Stephen Kinzer 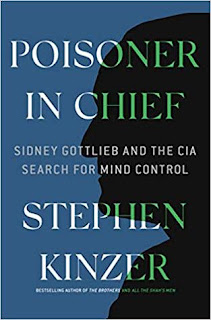 As the reviewer of this book for The San Francisco Review of Books wrote, Poisoner in Chief is an "awful story, told fast and well." I couldn't have said it better myself.

According to author Stephen Kinzer, the early years of the 1950s were a "fearful time for Americans," citing among other things the "ugly stalemate" of the Korean War and Senator McCarthy's warnings that "Communists had infiltrated the State Department." The success of the Soviets' first nuclear weapons test led to the fear of being "attacked at any moment," and we also that the Communists "had found ways of controlling people's minds."  The term  "brain-washing" was introduced in 1950 to Americans by a militant anti-Communist propagandist  by the name of Edward Hunter, who was likely working for the CIA at the time, and who would go on to write a book called Brain-Washing in Red China, stoking fear and exacerbating Cold War anxieties. Hunter  "urged Americans to prepare for 'psychological warfare,' " since Red "specialists" were


"preparing psychic attacks aimed at subjugating 'the people and the soil and the resources of the United States' and turning Americans into 'subjects of a New World Order' for the benefit of a mad little knot of despots in the Kremlin."

There was no real evidence that any of what Hunter said was true; nevertheless Allen Dulles along with "other senior officers" of the CIA feared that "they were losing a decisive race."   As Richard Helms would put it many years afterward, they believed that they couldn't afford to "lag behind the Russians or the Chinese" in this area. The CIA became convinced that


"there is a way to control the human mind, and if it can be found, the prize will be nothing less than global mastery."

In a memo written in 1951, CIA officers posed a list of several questions along the lines of "Can we 'alter' a person's personality?" or "How can [drugs] be best concealed in a normal or commonplace item..." , the answers to which, they decided, would be "of incredible value to this agency."  Realizing that their current  Project Bluebird needed "an infusion of expertise and vision" from outside of the agency, Dulles and his officers decided to bring in a chemist


"with the drive to pursue forbidden knowledge, a character steely enough to direct experiments that might challenge the conscience of other scientists, and a willingness to ignore legal niceties in the service of of national security."


Born in New York in 1918;  Gottlieb's college and postgraduate years were spent at University of Wisconsin and Cal Tech, where he majored in chemistry and received his PhD in 1943. Halfway through his doctorate program came the Japanese attack on Pearl Harbor, but Gottlieb remained to finish his degree.  In 1943 he tried to enlist in the army but was turned down due to a limp left  from childhood operations on his deformed feet.  Gottlieb was "crushed," but still had a desire to serve his country; after a few jobs working for various departments of  the government in DC, by 1948 he was looking for "more of a challenge" in his work. Ultimately he found it;  as the author states

"Everything suggested that he was headed for a career as a government scientist. So he was -- but he could not have imagined what a phantasmagorical kind of science he would be called to practice."


While this "phantasmagorical kind of science"  involved, as Kinzer puts it, "years of heinous assaults on the lives of others,"  reading about Gottlieb's home life makes for a serious case of cognitive dissonance on the part of the reader.  This man, the "poisoner in chief" and "mind control czar,"   architect of  MK-ULTRA, the  "most systematic and  widest-ranging mind control project ever undertaken" spent his time at home with his family, taught folk dancing, wrote poetry, grew vegetables, tended to his goats, and devoted time to focusing on his own spirituality.  On a segment of NPR's Fresh Air that aired this past September , Kinzer describes it as a "Jekyll-and-Hyde life," which is the vibe I got as well -- we're talking about a man who sought   "inner peace while just as relentlessly laying waste to other people's minds and bodies."

Poisoner in Chief is not at all easy to read on a human level -- it's shocking, it's graphic, and it's frightening to think that all of what the author details over the course of this book was sanctioned and done in the name of national security and the defense of freedom. It also makes you wonder if anyone involved ever had the least qualms of conscience.  "Awful" this story may be, but at the same time, it's compelling enough that you absolutely cannot stop turning pages.