A veritable tryptich and a double mystery: She Said, She Said, He Said

One early April night  I was going through one of my periodic bouts of insomnia,  tossing and turning and turning and tossing until I'd had enough. I decided to go downstairs to watch something on TV, figuring I'd bore myself back to sleep watching C-span or something. All that was on were infomercials and some really bad movies, and since by this time I was wide awake,  I moved over to Netflix and started skimming through documentaries (my favorite part of tv), and that's when I stumbled on one called "Satan Came to Eden."  It was based on one of the strangest stories I'd never heard, and so I wanted to know more. The result: a purchase of a veritable tryptich of books, two separate memoirs written by two women who'd been present at the time and an account by a writer in the 1980s who had "set out to follow the clues and solve the mystery."   The action took place back in the 1930s, when a strange woman who called herself the Baroness made her way to this lovely island, and after antagonizing everyone there, mysteriously disappeared off of the face of the earth along with her lover, never to be heard from again. 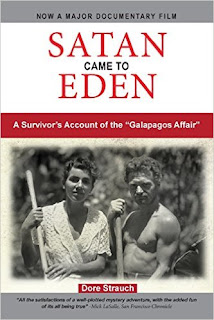 Starting with the book for which the documentary was named, Satan Came to Eden was written by Dore Strauch, who along with her lover and mentor Dr. Friedrich Ritter, decided to chuck life in German civilization and attempt to live in complete harmony with nature, hoping  to "fight their way to inner freedom."  Ritter, whose philosophy "moved between two poles, with Nietzsche at the one end and the other Laotse," kept a little black book in which he recorded the "remotest archipelagos and single islands."  Ultimately Ritter chose the small island of Floreana (aka Charles Island) in the Galapagos, based on reading William Beebe's 1924 book Galapagos: World's End.  (By the way, I get absolutely nada if anyone clicks through to Amazon so feel free.)  By the end of June, 1929, Ritter had given up his practice, the two of them had said their last farewells, and made their way to Floreana where they set about the business of living.  While Dore's book has a LOT of information about the Baroness, her entourage and her disappearance, much of Satan Came to Eden involves, of course, the hardships they went through in getting started, one of which was the arrival of a second German family on the island.  The new guys, the  Wittmers,  had read some of the newspaper accounts which had filtered back to Germany about the modern Robinson Crusoes, and in need of a healthy environment to raise their young but ill son, had also decided to make Floreana their home.  Margret Wittmer's story  is documented in book two, Floreana: A Woman's Pilgrimage to the Galapagos, which also gives a firsthand view of adjusting to life on a "wild, untamed 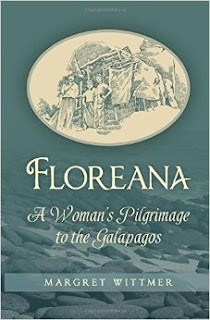 desert island in the heart of the Galapagos archipelago."  The Wittmers arrived in 1932; at the time, Margret was five months pregnant.  Obviously, the story of the Wittmers adjustment to life there is different than that of Dr. Ritter and Dore Strauch, but they overlap with the arrival of another person and her entourage, the Baroness Wagner de Bosquet.  By all accounts, the Baroness (self-styled, of course) was a bizarre woman, coming in tow with her two lovers, Phillippson and Lorenz,  and a hired hand who couldn't wait until his contract was up to get away from her.   The Wittmers and the Ritter/Strauch party got only an inkling of what they would be in for once the Baroness arrived; over time she would proclaim herself the owner of the island, set up a hotel, and involve the other islanders into her sordid affairs including a near-deadly rivalry between the two men who loved her.  The Baroness certainly made life on Floreana difficult for her neighbors -- stealing supplies destined for the others and charging them exorbitant rates to get them back, prowling around, spying, and trying to cause tension between the Wittmers and the Ritter/Strauches.   After some time of having to put up with this whacked-out, crazy woman (who would sometimes meet island guests in her panties) and the strange goings on between her two men, Margret hears the Baroness announce that she'll be leaving Floreana to go to the South Seas, and that was pretty much the last time anyone ever saw her.  She disappeared with Phillippson, leaving a very sick Lorenz behind, but afterwards, she was never heard from again. That was 1934; no one has ever found any traces, including bodies.

These two women's accounts offer varying takes on what may have happened to the Baroness and Phillippson.  Wittmer notes that the Baroness must have kept with her plan to go off to the South Seas via a visiting yacht;  Dore Strauch, who got the dates of the disappearance completely wrong, was adamant that murder had been done, and offered some clues (screams in the night, gunshots, etc.,) to bolster her claim along with some accusations.  But for me, the most interesting story in these books centers around the death of Friedrich Ritter -- was his death truly an accident, or was there more to it?

In 1983, John Traherne offered his ideas in his The Galapagos Affair, in which he not only looks at the memoirs of the two women but at outside sources as well. He goes over the story, putting all of the players in place as these strange events occur, leading up to the disappearance of the Baroness and Phillippson; he then posits his opinion as to what may have happened.  Moreover, he examines the conflicting "she said she said" accounts of Ritter's death and comes up with various scenarios and then an entirely plausible solution, which actually accords with what I thought after I'd read the two women's accounts.  I won't say what that was, but I will say that of those two books, one of them is entirely suspicious, since the writer contradicts herself more than just once. It's also very obvious that she has something to prove, but I won't say any more.  I love playing armchair detective, and these books offered a great opportunity to do so. 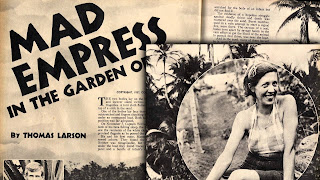 If nothing else, check out the documentary -- the bizareness of the whole thing, especially in the case of the Baroness,  leaps out at you while you're watching, and in my case, I couldn't turn away.  I was so fascinated with it all that until my books arrived, I read every single thing I could find on these cases -- that's how deeply these mysteries got under my skin.  The books (all three) and the documentary I recommend for people into historical true crime; if you want to skip the two memoirs and go right to Treherne's book, he does a great job in bringing forth material from both accounts, summarizing them, adding in other, outside accounts,  and then offering his own viewpoint.   I'm left wondering though just  how many of these odd, unsolved mysteries there are that may be worth reading about which,  as was the case with this story, I had no clue even existed.  Now my appetite is whetted -- I'll be looking for them.

Posted by NancyO at 2:43 PM No comments: