The Secret Token: Myth, Obsession, and the Search for the Lost Colony of Roanoke, by Andrew Lawler 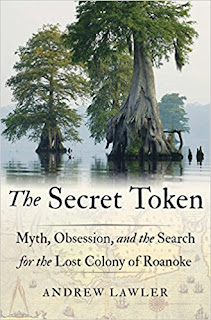 "Why do people search for Noah's ark?...Why do people search for Amelia Earhart? What is going to come out of it? You can't own it. You get fifteen minutes of fame. But anybody could be that person.  There is a mental illness involved with searching for something that hardly be found. I've seen so many people go over the deep end. It's a disease. that is why the Lost Colony is such a great story."


I am fascinated by mystery stories, and they don't have to be fictional to capture my interest. This goes back to my childhood when I would read anything and everything, fiction and nonfiction alike.    My mom was a member of the book of the month club (or something akin to it way back when) and I clearly remember running out of library books one day and picking up her copy of The Search for Amelia Earhart by Fred Goerner.  I had absolutely no idea who Amelia Earhart was at the time, but I still remember being held captive by the story and the photos.  I mention that book here because it began my intense interest in "real" mysteries -- you know, the kind you may never find the answers to in your lifetime but which never leave your brain.   For me, the fate of the "lost colony" of Roanoke was another such real mystery stemming from childhood, and I joined the ranks of lost colony obsessives.  But while I may be obsessed,  I'm still picky about what I read and even more so about what I think is plausible, so when I saw that Andrew Lawler (an author I trust whose work I've read many times in The Smithsonian) had published a book about it,  I couldn't push that buy button quickly enough.  It is an informative, thought provoking and downright captivating book that any Roanoke obsessive must read, unless, of course, you're of the alien abduction or yes, even zombie crowd who thrive on more out-there sort of theories.

Most people are familiar with the legend of the lost colony (more on this term later), which says that in 1587, a British expedition found their way to the Roanoke Island off of the coast of North Carolina.  Three years later, a ship carrying John White, the governor of that colony, who had gone back to England in the meantime to pick up supplies for the people left behind, comes sailing back to Roanoke only to find it completely deserted.  While searching for his people, including his daughter Eleanor, mother of the first English child born there (Virginia Dare),  White comes across the letters C R O carved into a tree, but of the colonists themselves there is no sign -- as the author says, just "vanished from history."  So what happened to them?

In his book, Mr. Lawler explains how a chance meeting at a dinner held for speakers of an archaeological conference led to him becoming "immersed in the immense literature that has built up around the Roanoke voyages." It seems that in making conversation with a British archaeologist by the nane of Horton, Lawler discovered that the man was "doing a little digging in a place called Hatteras."  Lawler "jokingly" asked the man if he'd found the Lost Colony. It was the mention of Hatteras and the response "Indeed!" from the archaeologist that sparked the author's curiosity,  but further questioning and a number of emails later were met only with silence once Horton realized that he was speaking to a reporter.  However,  out of the blue a year later, the author received an email from the archaeologist saying that  "we now have pretty compelling evidence for the fate of the Lost Colony."   Hatteras, of course, is the modern name for Croatoan, the location that White felt the original colonists had gone to in his three-year absence.  In fact, there was a contingency plan that had been made before White sailed from Roanoke leaving everyone behind on his last voyage.  As we learn,


"If the settlers were to leave the island, .... they 'should not fail to write or carve upon the trees or posts of the doors the name of the place where they should be seated.' A cross over the name of their destination would mean that they left in an emergency..."

The letters C R O in the tree along the bank of the north shore,  and the word CROATOAN carved into a post in the settlement itself were part  a "pre-arranged code" -- a "secret token agreed upon between them and me." If the colonists had left in an emergency, they were to also add a cross over the name of their destination.   Since the colonists had not left a cross, White assumed and "greatly joyed" that he had "safely found a certain token of their being safe at Croatoan," although he also wrote that the plan had been for the colonists to move "fifty miles into the main," meaning inland, while Croatoan was to the south.

Horton invited Lawler to come and view their Hatteras findings, and Lawler began looking into other archaeological work being done, including one being done in the area fifty miles inland, and learned that "there was more to the story than a couple of archaeological digs."  As he became interested in the activities and theories of  "a larger cast of modern characters mirroring the colorful Elizabethans they pursued with such passion," he soon found himself "trying to piece together a bevy of smaller puzzles."

It is from this point that the book launches into the history and the people "central to the Roanoke missions," followed by an examination of different "clues" both archival and archaeological, including the famous "Dare Stones" and other so-called evidence.  And speaking of the Dare Stones,  the author looks into why the story of Virginia Dare continues to hold such a fascination; he makes some compelling observations about  the role this iconic figure and the Roanoke colonists came to play in an America that saw a number of upheavals including slave rebellions and Native Americans being forcibly moved out west.   He reveals how the figure of Virginia Dare has evolved at different times in our history, going for example, from an icon of racial purity to a symbol of "amends for the wrongs done by generations of whites against Indians."    Finally, he comes across another "secret token waiting to be read," as he explores the matter of descendants of these original colonists, whom he says, were not really "lost," until in the nineteenth century when the Roanoke colony became the subject of a romantic fictional story, with little Virginia Dare at its center.

At one point I had to laugh when the author describes how his work had gone "beyond professional diligence and into very obsession" that he'd seen in others.  There are several mysteries to be solved here, but as far as he's concerned, the "lost" colonists were like anyone else who in the same situation would have taken steps to insure their own survival -- it's much  more likely that they did the obvious and assimilated themselves into the nearby Native American tribes.  But, as he says,


"The real power exerted by the lost Colonists was not in archives or archaeological trenches but in the stories they spawned,"

so there will continue to be people who, despite the common-sense answer of assimilation, will continue to spin their own ideas or who will further the myths behind one of the most intriguing mysteries in our history.

Bottom line: it's fascinating stuff and Lawler is the  right person to put it all together. Very highly recommended.