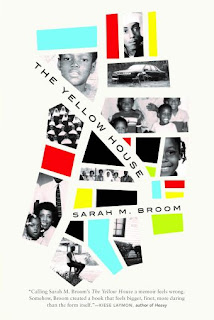 "We are all born into histories, existing before us. The same is true of places. No place is without history."

Toward the end of this book, author Sarah Broom reveals that for the first time in five years, while visiting relatives, she had dreamed about  the Yellow House  before a trip to New Orleans.  On waking,  she wrote in a notebook the following question:


"How to resurrect a house with words?"

which is precisely what she does in this stunning, deeply personal, and unforgettable memoir.

She begins her story


"From high up, fifteen thousand feet above, where the aerial photographs are taken, 4121 Wilson Avenue, the address I know best, is a miniscule point, a scab of green. In satellite images shot from higher still, my former street dissolves into the toe of Louisiana's boot"

then moves closer to ground level to the neighborhood of New Orleans East.  The mention of this area where the author grew up is "rare and spare, afterthoughts" in the "twelve of thirteen history-telling books about New Orleans" she has stacked up; she also mentions an Avis Rent a Car map that cuts off New Orleans East, "a point beyond, a blank space on someone's mental map," although this area is "fifty times the size of the French Quarter, one-fourth of the city's developed surface."  It is also a part of New Orleans which doesn't find its way into the city's mythology; it's not that it  is "too young for history," but sadly, has been


"relegated to the sidelines, deemed not to matter as much, the place not having earned -- through demographics or economic success -- a spot on the cartographer's nearsighted map..."

It is also an area that reflects ongoing inequalities faced by African-Americans since before the author's childhood, but above all, it is someone's home. People lived and live there.

Moving on, we are given a tour of the area as if the author is giving directions for driving there, a tour which hints at events involving her family at various locations along the way, slowly coming to Wilson Avenue until "finally arriving at what used to be our Yellow House," bought by the author's mother Ivory Mae in 1961 at the young age of nineteen and where thirteen children spent parts of their childhood.   It is there where the author's brother Carl often sits at a table at the spot where the living room of  4121 Wilson Avenue used to be, "where instead of floor there is green grass trying to grow."  This perfect beginning is beyond appropriate for many reasons which will become apparent while reading but more so because, as the author says in an interview on NPR,

an idea pointed to at the outset by her use of two different quotations, including part of Kei Miller's poem "The Cartographer Tries to Map a Way to Zion:"

It was in the Yellow House, which no longer exists,  "within its walls" that her mother "made her world."  And although it is no longer there, it has not been erased;  as the dustjacket blurb reveals, Sarah Broom demonstrates


"how the enduring drives of clan, pride, and familial love resist and defy erasure."

I find it appropriate that she unfolds these stories in "movements," since there is nothing at all static in the lives of these people (or for that matter, the street, the neighborhood or the city itself)  -- it is a story of people coming and going, absences, returns, displacements and dislocations, especially after 2005 and Hurricane Katrina.

The Yellow House is a beautiful, intricately-woven, often metaphorical book that allows the author to place her readers not  just inside  the house itself, but also moving outward,  inside the history of the family who lived there, the street, the neighborhood, and the city, about which the author has "braided, contradictory ideas."   It also moves inward, exploring her own connections to each, often from a distance.

Speaking of absences, and again quoting the author from the above-mentioned NPR interview, she says that


"it occurred to me that unless you knew a house had been there, you would never know. And I made this book in a way to stand in for that absence, to be a record, a history, so that some things might be saved.

While Carl keeps up the plot of land at 4121 Wilson Avenue to avoid it being taken away after the house had been demolished, "for any and for no reason, American History 101,"  he is also there  as "the keeper of the memory,"  knowing that he "could not put the house back together again," but still keeping watch, "letting the space transform and be the place it always was."

While I haven't even begun to scratch its surface here, I can't begin to say how much I loved this book; it is poignant, eye opening, and often funny, but above all,  so very down to earth and real, as it is told not only from the heart, but from the author's journalistic, investigative interviews with people within her own family.

I have to say thank you to Sarah Broom for going against her "leanings" and bringing me to the Yellow House.  I have never read anything like this before, and I doubt I ever will again.  To say I loved it is an understatement.

Since I'm just a reader, neither a critic nor reviewer, here are a few reviews from people who know what they're doing:

Posted by NancyO at 3:35 PM No comments: