The Littlehampton Libels: A Miscarriage of Justice & a Mystery about Words in 1920s England, by Christopher Hilliard 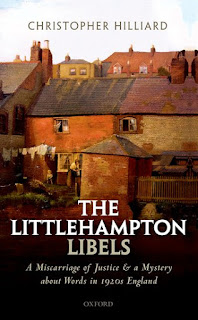 A series of poison pen letters being circulated in a small English village is the subject of Agatha Christie's 1942 novel The Moving Finger, yet there are a number of other books in which they appear as well.  Dorothy Sayers, Edmund Crispin, and John Dickson Carr spring to mind immediately as just a few examples; in the hands of these authors murder generally followed as a result.  In The Littlehampton Libels there are no killings, but the poison pen letters circulating in the 1920s within Littlehampton, a "middling town" along the Sussex coast (and beyond), eventually merited police investigations, resulted in four different trials, widespread news coverage,  imprisonment, and, as the title reveals, "a miscarriage of justice."  The stories of the two women involved, according to the author, is a


"kind of English story told over and over in fiction and film but rarely in works of history..."

And it all began with "a quarrel between neighbors."

In 1918, Bill and Rose Gooding moved into the town of Littlehampton, at No. 45 Western Road.  Rose's sister Ruth Russell shared the house with them and their daughter Dorothy; Ruth had two children of her own.   No. 45 shared garden space with two other houses:  No. 47, the home of the Swan family, as well as No. 49, the "police cottage," where police officers and their families could sublet the house which was rented by the West Sussex Constabulary.  At the time "the libels started flying," the police cottage housed Constable Alfred Russell and his family.  At first, Rose Gooding and Edith Swan (age 30 and living with her parents), seemed to get along well, but an incident in May of 1920 led Edith to call in the National Society of Prevention of Cruelty to Children against Rose, in a complaint of "illtreating a child."  The inspector who came out in response to Edith's complaint found nothing amiss, but it was just after his visit that "a flood of filthy postcards" began, with the bad language escalating each time; since they were signed "R--", "R.G.," or "with Mrs. Gooding's compliments," the assumption was that the letters had come from Rose Gooding in retaliation for Edith's complaints.   Rose consistently denied that the letters had been her doing, and the police were satisfied, but that wasn't enough for Edith -- eventually she consulted a solicitor and instituted a prosecution against Rose for "criminal libel," which ultimately resulted in a two-week imprisonment for  Rose, as well as her being responsible for keeping the peace for two years after her release.   While I won't go into details here, mainly because this bizarre story really has to be experienced on one's own, Rose found herself back into prison, appealed, and her case was reopened, along with a major investigation to find the true culprit which reads at times like something you'd find in a work of crime fiction.

In this truly splendid work of microhistory, written in a way I personally believe the best histories should be written,  the author traces not only the events in this case, but uses his investigation to also examine how, as he says, these


"outlandish insults form part of a larger story of individuality and originality in unexpected places."

As Bee Wilson says in her review in the London Review of Books, (which you should absolutely refrain from reading until you've finished the book),  The Littlehampton Libels  reveals "the uses and abuses of literacy. " It also gives a concise history of the legal use of libel up to this point in time as well as an insight into how the legal system was used by members of the working class.  It's important to note here that one's respectability as a member of this class was based on several factors and there were gradations in the class structure.  In this particular case, as Mr. Hilliard notes, it wasn't "just circumstances that counted against Rose Gooding," but more to the point, it was the fact that she and her family were viewed as belonging to "a slightly rougher class" than her accuser, a woman seen to be of  "very good character" and one who would never use the sort of language found in the poison pen letters.  As the trial testimony was given, and that particular point was made, something popped into my head right out of Christie's  The Moving Finger  and I had to go look it up.   There's a scene in which Jerry Burton tells us that


"In novels, I have noticed, anonymous letters of a foul and disgusting character are never shown, if possible, to women.  It is implied that women must at all cost be shielded from the shock it might give their delicate nervous systems."

Given the "foul and disgusting character" of the Littlehampton poison pen letters and the truth behind who actually wrote them, well, I couldn't help but inwardly giggle thinking about that particular passage.

Obviously my short post here just scratches the surface of this book, but The Littlehampton Libels is a phenomenal work of history,  giving credence to the idea that quite often truth is stranger than fiction. I knew it was going to be something right up my alley when I first read about it, and I don't regret forking over more than I generally pay for a book to read it.  I can't speak highly enough about it.