Enemies: A History of the FBI, by Tim Weiner 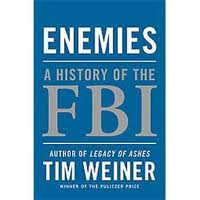 My many thanks to Random House for sending me a copy of this book and to LibraryThing's early reviewers program as well.  It is an eye-opening, well-researched and intelligently-constructed  history of the FBI in  its role as a "secret intelligence service." The book examines how the Bureau has long been operating outside of the rule of law -- "the foundation on which America was built", and offers its readers a look at the ongoing struggle between national security and civil liberty. Although I may not personally agree with the author's final conclusion, it's still a very well-written book.

It's impossible to give this book the justice it deserves in a short span of time, so I'll only offer a brief rundown.  The Bureau of Investigation was founded during  Teddy Roosevelt's administration; originally Congress had voted down its creation, concerned about the existence of a "central police or spy system in the federal government.”  As would later become a regular pattern between presidents and the FBI,  Roosevelt came up with a way around the decisions of Congress:  he appropriated money from a “special expense fund” to start hiring agents.  There was no formal charter at the time of the Bureau's inception, nor is there one today.   It should come as no surprise that  a major  portion  of this book deals with J. Edgar Hoover, since in effect, Hoover was the FBI until his death in 1972.  There's also another reason: as part of his research  for this book, Weiner was able to obtain 70,000 plus pages of newly-declassified material, including Hoover's intelligence files, in which J. Edgar noted down his thoughts or reactions to each matter at hand.

Hoover had a definite view regarding America and the preservation of the American government and way of life.   His earliest work was aided largely by legislation enacted during Wilson's adminstration, such as  the Espionage Act of 1917 and the Sedition Act  of 1918, which afforded  Hoover a great deal of power as the head of the Radical Division of the Justice Department to which he was appointed in 1919.  Answering to A. Mitchell Palmer, by the age of 25, Hoover was already responsible for the roundup of thousands of people he considered to be subversives and potential enemies; he had planned and directed the Palmer raids of 1920.   But in the wake of the raids, he found himself in a defensive position because almost none of the people rounded up warranted arrest and the arrests were made "without warrant  or any process of law." Hoover played it cagey when asked about his involvement,  disavowing any role at all -- learning about the importance of "secrecy and deception" in the process and leaving Palmer to pick up the flak.  He was also very good throughout his career at instilling paranoia about an America under threat of attack from its enemies, both foreign and domestic, and extremely adamant that the Bureau should never be embarrassed.

As  the author states, Enemies is also a record of "break-ins, burglaries, wiretapping and bugging on behalf of the president."  FDR  came to the White House in 1932;  in 1936, after a warning from Hoover that Communists were clearly a major threat not only to the unions and the press of America, but also that they were "boring into the government,"  Hoover received from the President the authorization to investigate and to proceed with intelligence operations "against American enemies."  Nothing was ever written down (except on Hoover's side) and Hoover took FDR at his word,  using FDR's go ahead as the authority to continue this work throughout the rest of his career.  He was now at liberty to use various means at his disposal --  as the author notes, wiretapping (which Hoover believed was legal as long as the fruits of the eavesdropping was not used in court), "bugging and break-ins became a holy trinity for FBI intelligence operations from the 1930s onward."  Hoover was ready to do whatever was necessary "against all enemies, foreign and domestic;" he would later have a vision of himself as the head of a world-wide intelligence agency with total control.  If the Constitution got trampled on in the process, well, let's just say that in protecting the American nation, Hoover was never too concerned about rights or civil liberties.  For him, the President's word was the law and the basis of his continued power.  Hoover disliked Truman, who voiced his concerns about the FBI as an "American Gestapo,"  but in 1950, after the beginning of the Korean War, Truman expanded Hoover's power even more. And when  Truman broke the news that the Soviets had the bomb, Hoover's paranoia seems to have been justified.  The "national security establishment" started expanding and continued to do so into the Eisenhower administration.  Ike's Executive Order 10450 focused on tightening internal security, and it was FBI agents who were put in charge of carrying out this order. The order, beyond anyone associated with communism, denied employment to "homosexuals, drunks, and other social aberrants" who might constitute security risks.  One FBI officer committed suicide, realizing what kind of "false charges" might be brought against him; multiple careers and lives were ruined.  Enemies goes on through the Hoover-era presidents JFK through Nixon,  then examines the FBI and its relationship to the US presidency after J. Edgar's  death, bringing the book up to date with Barack Obama.

Even though the FBI had many successes, there were also  many mistakes throughout its history.  Weiner also spends some time on critical errors that he believes led up the events of 9/11.   For example, the deep rift between the CIA and the FBI, going to back to Hoover's hatred of Bill Donovan, led to a respective refusal to share crucial intelligence information.  Information was out there, but it was just in many pieces and in many hands, sometimes even overlooked. In many cases, the FBI's right hand had no clue what its left hand was doing.   Informants were not taken seriously, there was a lack of translators; the list goes on and on. Other contributing factors in the Bureau's poor handling of intelligence are the "individual experts" who had "no institutional knowledge" --  the 56 field offices of the FBI worked as agencies unto themselves in isolation, FBI agents also rarely talked to the analysts, and  bureaucratic oversight was often nonexistent or very poor.   Also, in 2000, the computer capabilities of the FBI were so bad that the a normal teenager had more computing power. Add to all of the above political friendships and poor judgment in appointments that hampered, rather than helped the FBI as an intelligence service, and you've got a very costly (in terms of lives)  situation than cannot afford to stand uncorrected.   Things have changed now, according to the author, and he discusses some of what's new with the FBI since the appointment of Mueller as director.

There's a great deal more than what I've outlined here, since I'm trying to be as brief as possible. Throughout the book, woven in and around the FBI's history, Weiner examines the tension that has existed between our civil liberties as guaranteed by the Constitution and the expanded powers of the government during a time of national crisis that may cost citizens some of their Constitutional rights.   It's also a look at how democracy works in a modern surveillance state where we've become "inured to the gaze of closed-circuit cameras, the gloved hands of airport guards, and the phalanx of cops and guardsmen in combat gear."  According to the author, we may not necessarily love Big Brother, but he's "part of the family now." He also notes that the FBI's manual of operations vis-a-vis counterterrorism is a sign that the government is trying to strike a balance between liberty and security, but yet the FBI continues to work without a charter.

Personally, I liked this book, although I do have reservations about Weiner's faith in the present FBI and the present government where our civil liberties are concerned.   Enemies is  incredibly interesting, fleshing out bits and pieces of history with which I'm already familiar, and it offers anyone remotely interested in the topics he covers a great deal of fodder for further reading.  It's very reader friendly, and despite some reviews I've read about it being snooze material, it will grab the attention of anyone who's interested.  What you won't find here are any juicy pieces of speculation about Hoover and his sex life, which is just as well -- it's all hearsay anyway and it's also irrelevant.  I also think Weiner might be looking through his rose-colored glasses  -- an FBI manual of operations is all well and good, but  time and again, and he shows it himself, when push comes to shove in a matter of national security, the government can exercise greater powers that don't always mesh with our constitutional rights.

for more on this book, professionally speaking, read the reviews from The LA Times and the New York Times, and don't miss NPR's interview with Tim Weiner.
Posted by NancyO at 2:04 PM