The Girls Of Atomic City: The Untold Story of the Women Who Helped Win World War II, by Denise Kiernan

If you are at all interested in women's history or in the history of America's nuclear program, The Girls of Atomic City should be one of those books that gets added on to and then moved up to the top of your tbr pile.  It is one of the most thought-provoking nonfiction books I've read in a long time.

Pretty much everyone knows the iconic figure of Rosie the Riveter, who symbolized the women helping out the war effort during World War II.  When the men went overseas, many of the women left behind were called on to do jobs previously done by men, and their work amped up production lines to keep the war going.   The Girls of Atomic City explores some of the women who also kept things going in a project located  in a facility in what is now Oak Ridge, Tennessee, one that was geared toward putting an end to the war. 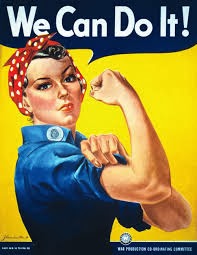 The women were trained to do only very specific tasks without understanding the overall project that their labors helped to create.  They were not allowed to talk about their work, nor were they allowed to question anything, and they never knew who might report them if they did.  The project was so secret that wives couldn't talk to husbands about their work, dating couples couldn't discuss their jobs, workers couldn't talk to families or friends on the outside, and  violations of that rule often ended up with people simply disappearing, never to be heard from or seen ever again.    The women, along with the majority of men working at Oak Ridge, had no clue at all that everything they did helped to contribute to the production of the atomic bomb that was used first in Hiroshima, and then Nagasaki.  It was only when the bombs were dropped that the news was released, and people finally realized what it was they'd been working on.  In The Girls of Atomic City, the author examines the personal and professional lives of some of the women who called Oak Ridge home for the duration.  It can get a little boggy sometimes with too much detail, and in some cases doesn't seem to go far enough in terms of questions that weren't asked, but despite these flaws, an overall look at the big picture makes this a history well worth reading. It also made me wonder whether or not something like an Oak Ridge might be possible today in terms of the sheer amount of secrecy involved, but that's a point I'll take up later.  The book is definitely thought provoking and also provides a look inside the America of the WWII years.

Across eastern Tennessee, residents in 1942 found themselves having to move away from their homes, their farms and their land, much of which had been in families for generations.  The US Government needed the multi-thousand acres of  space for construction of  a facility for enriching uranium, a project so secret that all but a handful of  people who eventually came to work there had no idea of what all of their work was for.  The place was known as the Clinton Engineering Works (CEW) , a place staffed mainly by women since men were off doing their part in the war.  That's not to say that there were no men there, but a lot of the women working at CEW were attracted to the idea that they would be contributing to bringing their men  home safely and sooner.  They were also urged to take the jobs because of the money they'd be making, and for some, it was a chance to get away from home and do something entirely new.  The book also examines how some of these women made the best of living their lives despite the crappy housing, the mud and the restrictions placed on them as women, both at home and in the workplace.  For example, if a married woman  or women with children came to Oak Ridge before their husbands could get there, they found that they were not considered heads of household without their men and had to take what they could get in the way of housing, which wasn't that great. It was worse for African-American workers, who were segregated in every way from everyone else, but needed the jobs for the pay that they could send home to families left behind. But despite the harsh conditions, people here managed to build communities of friends and settle in for the duration. 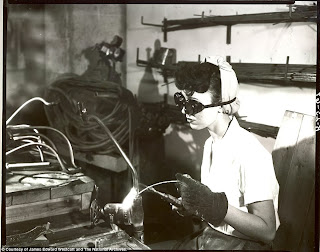 Some of the best parts of this book deal with how the vast amount of secrecy had an effect on day-to-day relationships -- by the time all was said and done, some 75,000 people lived and worked at Oak Ridge  under an all-pervading aura of secrecy where conversations, even those between husbands and wives, were limited to mundanities rather than what happened at work that day. People never knew who would rat them out -- one woman in Kiernan's book was asked to spy on others shortly after she got there, and in some cases, people who talked a little too much were there one day, gone the next and never seen again.  Signs were posted everywhere to keep things under wraps so reminders were ever present. The secrecy even made local outsiders wonder if Oak Ridge was some huge social experiment going on under their noses, since the people who frequented local shops wouldn't discuss what went on in there or gave flip answers to questions.

Thoroughly researched, the author also discovered women still living who had actually worked there and got their stories, which gives adds an extra layer of authenticity to her work.  The book is organized in a compartmentalized structure, where you meet a character or two, then on with what's going on at Oak Ridge, moving to small sections about the science and what was going on in the world with atomic research. One of the best parts of this book is at the end,when people realize after Hiroshima exactly what their work had created, and the very mixed feelings this discovery generated.

The telling is not without its flaws, though.  Sometimes the book bogs down with a lot of details.  For example, how many times did we need to hear about all of the shoes that were lost to the mud? If it wasn't high heels, it was saddle oxfords or shoes that cost their owner a lot of money -- I mean, seriously, once is enough for readers to get the point. And other than human interest, why did we need to know about one woman's  interactions with prospective in-laws in New York? There are a number of little stories like this one, and while they help to make these people a little more real for modern readers, they become cumbersome and irrelevant  after a while. Then there are places where I felt the author could have done more follow up. For just one example, there's the story of Ebb Cade, the African-American man whose legs were broken in an accident. He was put into an Oak Ridge hospital where he received injections of plutonium even before his bones were reset -- Kiernan gives us a little bit of that story, including the pulling of his teeth, then fails to follow up in any more detail on what happened to him, as previously discussed in Ellen Wellsome's The Plutonium Files: America's Secret Medical Experiments in the Cold War or in James H. Jones' most excellent Bad Blood: The Tuskegee Syphilis Experiments.

Overall though, The Girls of Atomic City is an incredible and eye-opening book, not just about the people who lived there and what they were doing, but about a time in America when this sort of secrecy on the part of the government was rarely questioned and was accepted as vital to national security.   I think the big question I was left with at the end of it all was whether or not a project involving so much secrecy on the scale of Oak Ridge could ever occur again in the U.S.  Highly unlikely, but then again, maybe there are things like this going on right under our noses that we don't know about.  I definitely and most highly recommend this book to anyone interested in women's history,  Cold War history or the history of the war effort in the United States.

If you're at all interested in this topic, there's an entire website with pictures documenting the  history of the CEW during the 1940s.  The book has pictures, but there are many, many more at this website.