Childhood: The Biography of a Place, by Harry Crews 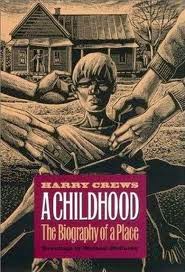 "Nothing is allowed to die in a society of storytelling people."


In the opening pages, author Harry Crews  offers his readers one reason why he started writing this book -- it was because, as he says, "I have never been certain of who I am."  He goes on to say that he's "slipped into and out of identities as easily as other people slip into and out of their clothes;" that by the "third or fourth tape" of interviews he's done, he's  noticed that his voice would "become almost indistinguishable from the voice of the person" with whom he'd been speaking.  But he knows for an absolute certainty that whoever he is "has its source" in Bacon County, Georgia, and that


"... what has been most significant in my life had all taken place by the time I was six years old."

He also notes that in organizing  a "search" for those six years, he needed to rely not only on his own memory, but that of others as well. What he's put together here, he says, is "the biography of a childhood which necessarily is the biography of a place, a way of life gone forever out of this world."  With an old shoebox full of photos by his side,  Crews goes on to tell of a hardscrabble first six years of life first on a farm in Bacon County, his "home place," then in a brief move to Florida, and finally back again to Georgia.

I haven't had the pleasure of reading any of Crews' novels yet -- I wanted to read this book before opening  the one book I bought to try him out (Feast of Snakes), but my guess would be that themes that will be found in any of his writing are probably found in here as well.  Here are a few I've discovered:  the power and art of storytelling,  poverty,  family, "courage born out of desperation and sustained by a lack of alternatives," fantasy/myth as an integral part of survival, alcoholism, women, and fathers.  And then, of course, looming over all of those likely candidates, there's the American South, which is why whether or not all of the events depicted here in Harry Crews' young life are true isn't really an issue here.  It is, after all, a "biography of a place," and somehow, he manages to pull it off without roaming into the usual poor-South stereotypes, and does it in such a way that humor manages to come through the worst of harsh and tragic. I come from Southern stock on one side -- and the people in this book are about as realistically described as anyone my grandparents ever told me about from their own lives, which also started out under some of the same conditions as the people in Bacon County experienced in this book.

The only thing left to say, since this is a book best experienced on one's own, is that the quality of the writing drew me in pretty much immediately. I know it's cliché and even trite to say this, but frankly, I was just spellbound all the way through it.   Reading this book was an experience on its own -- it was so very easy, even without the help of McCurdy's drawings, to imagine it all in my head, as if Crews was writing and illustrating all at the same time. It was also very easy, once I got the reading rhythm going, to see just how his small  world made sense to him.  As just one example, take this scene of young Harry looking through the Sears Catalog with his friend Willalee Bookatee:


"I first became fascinated with the Sears catalogue because all the people in its pages were perfect. Nearly everybody I knew had something missing, a finger cut off, a toe split, an ear half-chewed away, an eye clouded with blindness from a glancing fence staple. And if they didn't have something missing, they were carrying scars from barbed wire, or knives, or fishhooks. But the people in the catalogue had no such hurts. They were not only whole, had all their arms and legs and toes and eyes on their unscarred bodies, but they were also beautiful. Their legs were straight and their heads were never bald and on their faces were looks of happiness, even joy, looks that I never saw much of in the faces of the people around me.

Young as I was, though, I had known for a long time that it was all a lie. I knew that under those fancy clothes there had to be scars, there had to be swellings and boils of one kind or another because there was no other way to live in the world. And more than that, at some previous, unremembered moment, I had decided that all the people in the catalogue were related, not necessarily blood kin, but knew one another, and because they knew one another there had to be hard feelings, trouble between them off and on, violence, and hate between them as well as love."  (58)

When I read this, something clicked inside of my own head about how well Harry understood his universe, even at such a young age. It's probably likely that at the time he wouldn't have used those words or even been able to describe his thoughts in those terms, but the feeling that he fully comprehended the unreality of the people in the catalog as juxtaposed against his experience comes through loud and extremely clear. The entire book is written like this, sucking you in to this childhood of his along with all of its scars, its violence, and the love of his family he could always count on no matter what.  Very highly recommended.