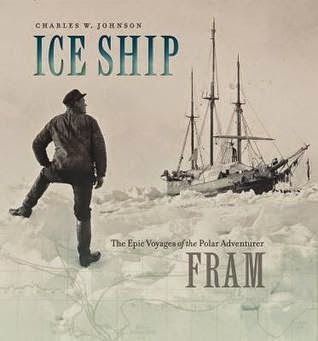 Of all possible fields of history from which to choose, polar exploration in its heyday is my favorite subject. When I was a kid I was fascinated with explorers and would spend hours upon hours reading about them. In the realm of polar expeditions, I got my start reading Roland Huntford's The Last Place on Earth, a true account of about the rush to the South Pole, and what turned out to be a race between Amundsen and Scott to plant their respective country's flag. It was in that book where I first heard about the Fram and about Fridtjov Nansen, and I remember being quite impressed that Nansen had such foresight in building the perfect ship. In this current book, author Charles W. Johnson provides not only a look at Amundsen's expedition in the Fram, but also at the two other epic expeditions of the ship, its creation, the men who called it home for years on end, and its eventual fate.
Regular readers engaged in histories of polar exploration who are already familiar with Fram's voyages will still find plenty to like about this book. The author picks up on some things Nansen glossed over in his Farthest North, the record of his voyage on the Fram. There are a number of original photographs as well as maps that the reader can reference. Interestingly, it was an article about a few remnants of the USS Jeannette expedition (the subject of Hampton Sides' current book In the Kingdom of Ice: The Grand and Terrible Polar Voyage of the USS Jeannette and a great read, by the way) that somehow ended up in a place far, far away from where they should have been that got things going for Nansen. An article written about the finds prompted another article by a Norwegian scientist studying polar currents. His article in turn caught Nansen's eye and after much scientific study, Nansen decided to build a "special ship" that could weather being frozen into pack ice. The idea was that the ship and its crew would be "carried by the same currents that carried the Jeanette's remains over the pole." As the author notes, the ship was to be a sort of "driftwood, of an extraordinary kind." With much careful planning, the Fram was born -- and she was to see two more major expeditions in her lifetime. Not only does the author detail these expeditions and the people who were involved, he also examines what else was going on in the field of polar exploration, north and south, at the time. So the reader ends up with a kind of general but not overwhelming or overdetailed history, also making it perfect for anyone with even just an interest in the field of polar exploration during the period which the author calls "the height of polar fever."
Granted, there are probably people who will take a look at this title and think that a book about a ship has just got to be duller than dishwater, but there's way more than just the ship under discussion here. It's a wonderful book, and by the way, the hardcover copy is beautiful and would make a great gift to someone who is interested in the subject.
Thank you to the publisher, and thank you to Librarything's ER program!