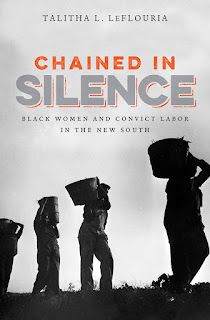 Just a heads-up: my perspective here is not at all academic. I haven't looked, but I'm sure this book has a number of scholarly reviews that will provide more of an in-depth, academic treatment.

I'm coming from the point of view of someone working to fill in gaps in my own knowledge of the history of African-Americans and of women in this country.  When I read that a major part of the author's purpose in this book was to "give voice to a group of women who had theirs taken away," I knew had to read it. Why?  As the author stated in 2015 in an interview where I first heard about this book,


"We have to honor black women's voices from below and to honor their struggles, and their working bodies in particular helped to build modern America. We have to look at these prisoners who were bound, unwaged, abused and terrorized, and who also helped shape political struggles to resist the abuses, the trauma and the terror, and the violence that was visited upon them. So although their resistance may have been less organized, less structured and less formal, it was still very potent and worthy of consideration."

The relevance of this story to our own time cannot be understated -- as the author notes at the end of this book,


"Today black women are still afflicted by the social, political and economic vices that predisposed them to arrest, conviction and incarceration in the past...In order to better understand the modern carceral state and the complex relationship black women have with it, we must confront the past and listen even when it seems to be silent."

There are at least four main issues that permeate this book (and which continue to resonate over the course of more than a century later): gender, race, crime, and punishment.   In this study, the author also looks at African-American women in the "carceral state" and how as bound women they were affected by the ongoing assertion of white supremacy and control in the post-emancipation "New South." This book reveals, analyzes and most thoroughly discusses those contemporary "social, political and economic" factors while allowing some of the women's voices to be heard after more than a century of silence. As the author notes, her work  is "chiefly invested in rebuilding the historical viewpoint of the unwaged, bound black female worker."

The story of these unheard women is revealed, in large part, through an in-depth, wide-ranging study of a number of primary sources that include such records as "Corporal Punishment Registers Monthly Reports (Whipping Reports), 1884-89" from the Georgia Department of Corrections, medical reports of prison doctors, court dockets, contemporary newspapers, and most importantly, the personal accounts of women who became part of the convict labor system.  As the author tells us, black convict women were "Georgia's (and the South's) most inconspicuous workforce," but they were also a "fundamental asset  in the development of Georgia's postbellum industries," including railroads,  brick factories, mining, and other industries that were instrumental in establishing  "New South modernity" after the civil war.  However, they had to endure some horrific, demoralizing, and downright dehumanizing conditions during their incarceration.

There is so much to this book that I can't possibly cover the complexities within in any amount of depth, but the chapter headings will offer a clue as to what's here:


Don't expect a history for the masses sort of thing here.  Chained in Silence is an academic monograph and a solid work of history in which the author offers her arguments, supports them with personal accounts or other data, and then provides in-depth analysis to make her case.   In some areas her work is hampered by lack of data, but she makes this very clear in the telling.  She also realizes that there is much more work to be done and offers topics for future researchers.  At the same time, she makes this book very approachable for readers like myself who believe that the best history is told from the perspective of those whose voices never quite seem to make it into the historical record. This book, for lack of a better way to say it, is just brilliant and deserves widespread attention.