News of a Kidnapping, by Gabriel García Márquez 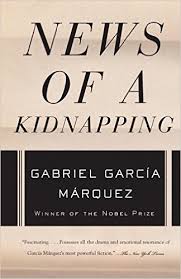 
When a disclaimer pops up at the beginning of every episode of a tv series I'm watching, to me it's like throwing down a challenge. We recently finished watching Narcos on Netflix, the series that over the course of the first two seasons was focused on Pablo Escobar.  At the beginning of each episode there's a blurb saying something along the lines of  some of what you're about to see has been fictionalized although it's based on real events.  Once we finished season two, my biggest questions focused on the truth behind US involvement, based on the portrayal of the creepy CIA agent running things behind the scenes, interfering with what the DEA was doing in the name of future American interests in the country.  Well, of course I did what any true-blue geek would do when it comes to the involvement of the CIA and the American military in a foreign country, and went to the National Security Archives (here) to try to get the real story on what was going on.  Reading each and every document mentioned in this summary, I saw that journalist Mark Bowden was discussed re his research, which led me to read his Killing Pablo,  which details US involvement in the hunt for Pablo Escobar.  That book, in turn, led me to News of a Kidnapping, which despite a number of readers' complaints, is neither "a snoooze" nor "a mediocre effort." Au contraire -- it's a book I read on the proverbial edge of my seat, hanging on every word.

In the acknowledgments section at the beginning, Marquez explains what's behind the writing of this book. In 1993, one of ten kidnapping victims,  Maruja Pachón  came to the author and "suggested" that he write a book about her abduction and her six months in captivity and her husband's "persistent efforts to obtain her release."  Marquez started working on it, but well into the first draft, he realized that


"it was impossible to separate her kidnapping from nine other abductions that occurred at the same time in Colombia."

Why? Well, by his reasoning, and as will be discussed in this book,


"They were not, in fact, ten distinct abductions -- as it had seemed at first -- but a single collective abduction of ten carefully chosen individuals, which had been carried out by the same group and for only one purpose."

Behind these particular kidnappings, of course, was Pablo Escobar and his "Extraditables," whose motivation was to force the government into backing down on its stance on extradition to the United States.

In a nutshell, the central focus of News of a Kidnapping is the stories of these abductions, the victims' experiences in captivity, and the families' efforts to get these people released, but to tell that story, the author places these kidnappings in the wider context of Colombia's troubled history of politics, narco trafficking and terrorism.  It also follows how Escobar went from being host to "Politicians, industrialists, businesspeople, journalists..." at his Hacienda Nápoles to becoming "the biggest prey in our history. Of Escobar, Marquez writes that "The most unsettling and dangerous aspect of his personality was his total inability to distinguish between good and evil," which is shown here in terms of the wave of violence aimed at presidential candidates and other political officials, cops murdered for the bounty on their heads, and explosions in the streets that killed innocent victims.

After reading what other readers have said about this book, it seems that many people were looking for Gabriel Garcia Marquez to give this book the magical realism touch he's applied in his novels.  A number of people were disappointed by the fact that this book is a journalistic take on events, rather than a novel.  I've seen it called "a snoooze," "boring," and "flat," and of course, there are those people who also watched Narcos and were expecting something along those lines, one person noting that she preferred the TV series. Hmmm.  Well, as I always say, to each his/her own, but seriously, it kept me on the edge of my chair pretty much the entire time with stomach twisted in knots. Then again, I'm the sort of person who likes to try to ferret out the truth of what's underneath the fiction, and in this case, it's pretty damn harrowing.

Highly, highly recommended.  And when you finish this one, read his Clandestine in Chile -- another excellent book.