...and speaking of lost cities: whoa. 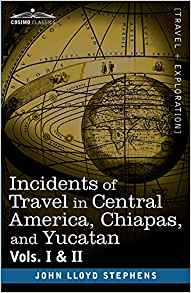 - Jungle of Stone: The Extraordinary Journey of John L. Stephens and Frederick Catherwood, and The Discovery of the Lost Civilization of the Maya, by William Carlsen
9780062407405, William Morrow, 2016

I don't know if anyone else does this, but when I read nonfiction, I go through the listed sources like a fine-toothed comb to find more about what I'm reading.  While I had some issues with the book,  one very nice thing to come out of my reading of Preston's Lost City of the Monkey God was the reference to this book, Incidents of Travel in Central America, Chiapas, and Yucatan, Vols. I & II -- so voilá, within a few days it was in my mailbox.  I had thought to only read the sections about the Yucatan since I was just there a few weeks ago, but I started from the beginning and got totally caught up in Stephens' book.  What may seem dull to quite a lot of people kept me flipping pages.  Stephens' account of his travels with partner Frederick Catherwood reads like an old-fashioned adventure story combined with history and the thrill of discovery as Stephens and Catherwood only make their way through Central America during a time of major political upheaval, battling dense jungles, illness, and even sharks while in a leaky boat.   Its true importance though, as Carlsen so aptly describes in his own book, is that these two people "altered the world's understanding of human history." More on that later.

After finishing that book and still hungry for more, I picked up Carlsen's Jungle of Stone, made it about halfway through, and then realized that Stephens had published yet another travel account, Incidents of Travel in Yucatan, also in two volumes.  Like any good nerd would do, I put the Carlsen book on hold  until I could read the second Stephens book, then picked it up again where I left off.

This book was less of an adventure story (although it did have its moments) than an account documenting the often-harrowing travels of Stephens and Catherwood through the Yucatan, where they made a circuit of several ruins from Copán to Tulum, as Carlsen calls it,  "their last great ghost city."

Fascinating stuff, made all the more interesting since, as I said, I was just there, which was the reason behind why I wanted to read these books.  Last year we were there as well and visited Coba, which is only briefly mentioned in Stephens' account, and made it up an eight-story pyramid,


while this year we did Tulum:


It's one thing to visit these places after they've been excavated, gone over, studied and written about, but imagine what it must have been like for these two men in the 1840s, coming across these places and having to hack out enough jungle just to get close enough to examine them. Their wonder at these discoveries is well documented in this book, along with Stephens' theories about the people who built these once-flourishing cities.  Their travels took them not only to these still-unexplored ruins, but also underground at times, for example at Bolonchen, as captured by Catherwood's excellent illustrations (pp 97, 99, and 101 respectively)

Both books are very much worth looking into for anyone who has an interest in Central American history, the history of the Mayan civilization, and archaeology; it's also great for armchair travelers.  But the most important thing about both of these books is explained very nicely in William Carlsen's book, Jungle of Stone. 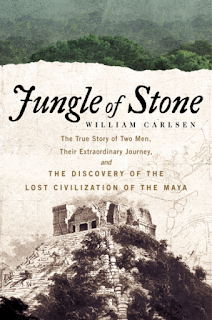 This book not only gives a great summary of both of Stephens' accounts, but also examines the lives of both Stephens and Catherwood. While Stephens was very well known, Catherwood's life  has been an enigma, and Carlsen gives as much insight into this man as is probably possible, since very little is known about him.  He  also examines the archaeology, the history and the studies that have been done since Stephens and Catherwood first made their way to the area to find this "hidden jungle of stones" that would "begin the process of unraveling the Maya's amazing, improbable history."   But there's much more here -- for example, the current view before their trek of discovery was that

"the Americas had always been a land occupied by primitive, inferior people,"

but that notion would be radically altered after Stephens published his books.  As Carlsen notes,


"After the publication of their books, the mysterious stone ruins in Central America, the vast, sophisticated road network of the Inca in South America, and the monuments and temples of the Aztecs could no longer be viewed as the Lost Tribes of Israel, the ancient seafaring Phoenicians, or the survivors of lost Atlantis. They were understood to be solely indigenous in origin, the products of the imagination, intelligence and creativity of Native Americans."

In short, Stephens and Catherwood not only paved the way for future exploration, but their discoveries and their keen awareness of the significance of what they'd found actually turned our own prevailing assumption about the development of civilization on its ear. And seriously, all you have to do is to visit a place like Chichen Itza or Tulum to discover the truth of what Carlsen (and earlier, Stephens) is saying.

I can very highly recommend all three books here -- reading the first one was often like being in the middle of an adventure, and there were times when I wondered how this guy managed to stay alive.   The second book was just sheer pleasure to read, and I'm already thinking that next year we'll go to Mérida as a home base for exploring more ruins.  Carlsen's book is absolutely perfect for readers who may be interested but don't want to spend the time reading Stephens' accounts, since he gives the highlights of both but adds in so much more.

I can't begin to say how much I enjoyed these books.