The Strange World of Willie Seabrook, by Marjorie Worthington 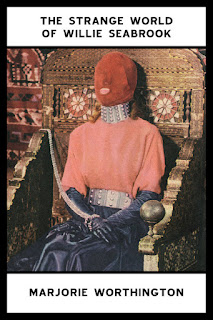 First things first. I have to take a minute and say thanks to Eva at Spurl, who brought this book to my attention.    Spurl is a small press, one that specializes in "unusual literature and photography," and I first heard of this publisher when they came out with Jean Lorrain's Monseiur de Bougrelon last year.  They "love the eccentric, the unexpected, the seedy and the absurd" like I do, so it's great match.

Who is Willie Seabrook, you might ask, just as I did.  I did a half-hearted search on him just to find out what he'd written, but left it at that since I decided I really didn't want to know anything about him until I'd read this book. Here we get to know Willie Seabrook the author, the traveler, and the adventurer; he was a man with many friends who loved him, a man who knew a veritable who's-who list of famous writers and other colorful characters during his lifetime.   However, Marjorie Worthington probably knew him better than anyone. In a very big way, this book is her own story.  Her love for Willie she describes as


"something so intricately bound up with the breath I breathed and the blood that channeled its way in and out of my heart that only death could put an into it,"

one, which says  "cut myself off from wherever I belonged in order to be with him."

Standing by him with the patience of a saint, finding deep reserves within herself upon which to draw, she documents that "strange world" she lived in with Seabrook, often at great risk to her own sanity, until a time when she just couldn't do it any more.  While the story is not pretty, it is compelling enough that I couldn't stop reading it, not so much because of any voyeuristic tendencies I may have, but because in Marjorie we have a woman who wrestled with her own demons while devoting herself to trying to help Willie with his. Written in 1966, the book takes us through Marjorie's years with Willie Seabrook, and then up until his death in 1945.  Whether this may be her own way of looking back and taking some measure of blame for his suicide, I'm not sure, although the argument could certainly be made here.

She begins her story in 1926 when they were both in Paris as part of what Gertrude Stein called the "Lost Generation."  The "core of her life" as she puts it, was during their seven-year stay in France; it was a time when they met for aperitifs and conversation with  people like Ford Madox Ford, Stein and Alice B. Toklas, and Jean Cocteau.  There they lived in a small place in Toulon where they both worked on their writing, although they also spent time travelling  throughout France.   There's a lot of "name dropping," as Marjorie calls it, but we also get a brief glance into Willie's rather strange persona for the first time.  On page 19, she refers to Willie's relationship with women, saying that he liked them,


"in spite of a deep-rooted hostility to his mother Myra, that compelled him to make them miserable...Author, traveler, celebrity, he could still look wistful and sort of small boy, and he had a way of making a nice woman feel that he needed her, that she alone could help him get rid of the demons that beset him, his drinking and his sadism." (19)

These twin "demons" of "drinking" and "sadism"  will reappear many times throughout Marjorie's account, but more interesting is that after having finished the book, it seems to me that here we have the first clue about how Marjorie sees her own role in Willie's life -- she is that "nice woman" who wanted to feel needed, and with whose help he could exorcise the "demons" in his life. Everything that happens later (up to a point), I believe, comes back to this statement, as Marjorie will take his failures on her own shoulders, making them hers.  For example, during the 1930s when Willie began drinking "almost a whole bottle before lunch, and another bottle between the time he awoke from his siesta and nine o'clock at night," to


"deaden some inner anguish that lay so deep a whole ocean of brandy couldn't touch it,"

he came to the decision that he needed to go to New York, "to be shut up someplace 'behind bars' where he couldn't get a drink for love or money."  In Marjorie's eyes, she "had failed" because she "could not help him stop drinking," and she viewed Willie's decision to leave for New York as a way of him telling her that the two of them "weren't good for each other," that she was "the last one to help him stop drinking," and that together they'd "made a fine mess" of both their lives.

She also came to believe that while they were "physically drawn together," she had also failed when it came to taming Willie's other demon, manifested in the women who were paid for hours to allow him to put them in chains while he took sadistic pleasure in their pain.  She referred to these women by the "generic name" of Lizzie in Chains, and while she hated it, she put up with it, once in a while even obliging him herself.

About his "Lizzie in Chains" fetish, she wrote that she


"had always kept some tiny thread of hope that one day Willie, who I believed could do anything, would be able to slay his evil demon before it destroyed him."  (293)

Things did seem to be on target for better lives after Willie's treatment for his alcoholism -- he was sober again, they married, he was writing, and they even bought a place in New York out in the country to take on "a new kind of life."   But even for a woman whose patience seemed to know no bounds, and despite her life devoted to  this man, Marjorie eventually came to discover that she had a breaking point, a realization that likely saved her in the process.

The Strange World of Willie Seabrook was written twenty years after Seabrook committed suicide. It is haunting, and between these two covers we find not only a lot of soul searching on the author's part, but also a picture of Seabrook as she knew him,  a deeply-flawed, severely-troubled human being who seemed destined for self destruction.  At the same time she leaves us with the idea that he was a


"fine, intelligent, and lovable man, with a touch of genius as well as madness,"

and that he inspired "deep and indestructible love" among those who "tried to help but were not successful." Perhaps Marjorie should have realized that the possibility looms large that Willie never really wanted help, saving herself a whole load of grief much earlier on.

very highly recommended and major, major applause to Spurl for bringing this book back into print.
Posted by NancyO at 2:28 PM