Making the Monster: The Science Behind Mary Shelley's Frankenstein, by Kathryn Harkup 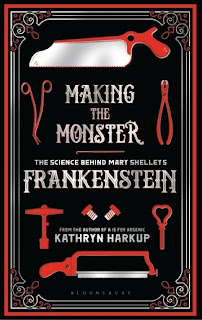 hardcover, sent by the publisher

My many thanks to the lovely people at Bloomsbury for sending me this book.  Some time back I read and enjoyed this author's book A Is For Arsenic: The Poisons of Agatha Christie, in which the author had surveyed Christie's novels and short stories, and then wrote about fourteen different poisons -- arsenic through veronal -- used by Christie to kill off her victims.  Despite the gruesome subject matter, it was a fascinating book, so when I was asked if I would like a copy of Harkup's Making the Monster, I wasn't at all going to say no.

Kathryn Harkup is a chemist and as it says on her website, a "science communicator."  On the dustjacket blurb of this book we learn that she


"completed a doctorate on her favorite chemicals, phosphines, and went on to further postdoctoral research before realising that talking, writing and demonstrating science appealed a bit more than hours slaving over a hot fume-hood."

Thank goodness for that, because in her role as "science communicator," she is able to take some very complicated science and distill it down so that people like me can understand it.  I love science but I will admit to being mystified by it at times; here I didn't feel overwhelmed or over my head.

That's a good thing, because Making the Monster, as the blurb says, "explores the scientific background" behind Mary Shelley's masterwork, Frankenstein: Or, Modern Prometheus, first published in 1818 and then again in 1831.  The book examines the "science behind the story," but it also pieces together the "political, social and scientific world that she grew up in."  The question that she poses at the outset is this:


"How did a teenager create a work of fiction that has enthralled, inspired and terrified for two centuries?"

which, if you consider it, is a very good question indeed, one providing the framework for what comes next.

After a section on a brief look at the Enlightenment, the author takes us not only into Mary Shelley's life (family, education, contemporaries, her possible inspirations for her work, its creation at the Villa Diodati and the scandals! that followed her and her family), but into the novel itself, both the 1818 edition and the later, revised 1831 edition.  All of that makes for fascinating reading, but where this book actually shines is in following Victor Frankenstein as he makes progress in his creation.  This part is just plain genius, since alongside Victor in the fictional world, we are taken through the history of science up to that time step by step, as the author demonstrates what information was available to a young woman with a well-rounded education and sheds light on the work of scholars or other people who may have influenced Mary Shelley in her writing.  She also reveals how Victor's work may have followed or diverted from known science of the time.

We are guided through Victor's work first in collecting the "raw materials" aka body parts, and this leads to a brief discussion of the history of the study of anatomy and discoveries that were made through the process, while taking us into the world of "bodysnatchers, resurrectionists or the "sack-em-up men," which could often, as the author noted, provide a good living. Using this model (the fiction vs. the real science) she goes on to examine the question of how Victor would have been able to preserve what he'd collected against the history/practices of real-world counterparts, going on into how Victor constructed his creation.  She then turns to the  "small electrical machine" he built to provide the spark of life to his creature, and then it's on to the reanimation of his finished creation, which leads to some of the most interesting writing in this book  as she goes into the history of electricity and  experimentation in its potential uses in medicine, some of it just plain creepy.

Following this section is another excellent (albeit short) chapter that focuses on the mind of creature itself, and the moral implications of its creation; there is also a timeline in the back that is quite interesting and extremely useful.

Once I started Making the Monster it was a book I was reluctant to put down for any reason, which says a lot since "scientifically-minded" is not a description I'd use in describing myself.  However, as I said earlier, the way in which the author put this book together made the science completely accessible so that the information is not at all overwhelming.   It is also a timely release, since it is now two hundred years since the publication of the original edition of Mary Shelley's Frankenstein, which as a novel has continuously captured people's imagination over the centuries.  Anyone at all who has read Shelley's book will love this one which gets behind the science fiction into the science fact.

highly recommended -- and again, my many, many thanks to the powers that be at Bloomsbury.

Email ThisBlogThis!Share to TwitterShare to FacebookShare to Pinterest
Labels: 2018, behind the book, Bloomsbury, history of medicine, history of science, nonfiction