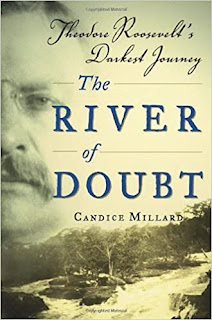 The River of Doubt begins with Theodore Roosevelt hovering between life and death "deep in the Brazilian rain forest."  It was apparently not quite his time though, as he would go on to finish out his journey through an uncharted tributary of the Amazon, not entirely unscathed but living to tell the tale.  It is a harrowing story of an expedition in which whatever could go wrong did go wrong.  At the same time the author offers a look at the often-unforgiving natural world surrounding these men; she also examines what it was about these particular men that got them through the dangers they faced on their nearly one-thousand mile journey.


Suffering from a "bruised spirit" after a landslide defeat in his bid for president in 1913, Theodore Roosevelt decided to accept an offer from the Museo Social in Buenos Aires to be a guest lecturer.  He was offered a rather large sum of money for three engagements, but beyond the fees, the trip would allow him the opportunity to see his son Kermit who was working in Brazil.  Roosevelt also had a "passion" for natural history and science, and wondered if perhaps he might be able to somehow "indulge" that passion while in South America. Turning to a friend who just happened to be the president of the American Museum of Natural History, Roosevelt was offered "full support," and was eventually put together with old friend Father John Augustine Zahm, who was at that time planning his own expedition to the Amazon.   Roosevelt was, of course, delighted and at this stage of the game anticipated "a 'delightful holiday' that would provide 'just the right amount of adventure.' "

The plan was that the expedition would travel north from Buenos Aires by boat along "well-known navigable rivers to the Amazon."  From there the group would go up the Rio Negro and down the Orinoco before crossing Venuezula to the Atlantic.  Plans changed, however, when Brazil's minister of foreign affairs suggested to Roosevelt that perhaps he would prefer to take a trip "down an unknown river" with Colonel Cândido Rondon, who had earlier discovered and named the Rio da Duvida, but knew very little about either its "course or character."  Rondon would use the opportunity to do a survey of this uncharted territory; it would be more dangerous than the route planned by Zahm for sure, but it was just the challenge that Roosevelt "had been yearning for."   Little did anyone know exactly what was in store for them once they set off on this journey that would ultimately leave Roosevelt at death's doorway.

Millard has done a fine job here, using a number of primary sources which include the journals of other expedition members to give a more rounded view of not only events but of the Amazon itself.  Her writing about the flora, fauna, and people indigenous to the area become integral to the story of the expedition as the group moves further into uncharted territory.  She also realizes that this is not solely Teddy Roosevelt's story; indeed it is probable that no one would have survived had it not been for Colonel Rondon.  Throughout his many years of working in the Brazilian wilderness, Rondon had become a devoted and dedicated advocate for the country's indigenous people; Millard notes that even when attacked by them, Rondon's men had orders to never retaliate.   Rondon left gifts for them instead, and although his peaceful tactics toward the Cinta Larga people was an issue of debate between Roosevelt and the Colonel, it seems that it worked, as the expedition, which could have been decimated "by consensus" of the tribe, was allowed to continue on down the river.

While the book is informative,  the way Candice Millard wrote it also offers readers a suspenseful narrative as to how they survived, as the back-cover blurb reveals,


"an unbelievable series of hardships, losing their canoes and supplies to punishing whitewater rapids, and enduring starvation, Indian attack, disease, drowning, and a murder within their own ranks."

I am focused on people in whatever I read, and here, when it comes right down to it,  the question becomes this: when at a point of no return where things are at their worst, what is it within people that allows them to carry on?  In that sense, The River of Doubt is not just about the physical journey made by these men, but a sort of journey of self-discovery as well.

At times a true white knuckler, The River of Doubt makes for compelling, page-turning reading. And don't miss the PBS American Experience episode "Into the Amazon" which brings this book and this expedition to life. I am a huge fan of Amazon exploration narratives, and this one is definitely high on my list of good ones.

very much recommended
Posted by NancyO at 1:07 PM