Alone on the Ice: The Greatest Survival Story in the History of Exploration, by David Roberts 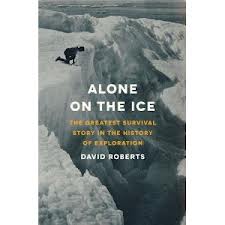 Having been a long-time devourer of books on polar exploration, I was more than interested when I saw that a new book on the topic had been recently published.  Alone on the Ice focuses on the story of Douglas Mawson, an Australian who led the Australasian Antarctic Expedition (AAE) from December, 1911 to 1913.  While Mawson's name might be recognizable from his time serving under Ernst Shackleton, his work was eclipsed largely due to the other Antarctic expeditions under way at the time, especially the race between Norwegian Roald Amundsen and British Robert Falcon Scott to be the first to the south pole during what is now referred to as the "Heroic Age of Antarctic Exploration."  Based on science, the expedition would prove arduous at best, but when tragedy strikes Mawson and his small sledging party of three,  things go from bad to worse in a very short amount of time.  Mawson's incredible feat of survival is documented here, but it is not the entire story.  Author David Roberts has quite obviously put in a lot of time and energy as far as research; not only does he explore Mawson's background and what led him to the Antarctic in the first place; he also examines what it was like for the entire group of  men  (some of whom had never even seen snow before) living in such a forbidding environment, isolated from the rest of the world. He then provides an epilogue as well as notes and his sources.  I read this book in one sitting because I was unable to put it down until I'd completely finished it.

Unlike other Antarctic explorers of the time, Mawson had no interest at all in reaching the South Pole; the AAE was primarily a scientific expedition and one of Mawson's intentions was to fill in some of the "terra incognita," comprising a "2,000-mile-long swath of ice and land" in the part of the continent due south of Australia. He also wanted to  The expedition members left Australia on the Aurora and  first reached Macquarie Island in December, 1911, where a five-person contingent was left behind  to a man a wireless relay station to be used for communication with Mawson's group. Originally Mawson had planned to split the remaining men into three groups, but time, ice and weather permitted only two.  Mawson and one group were dropped at Cape Denison, while the other, under the command of Frank Wild, were brought by the Aurora further west to a point on the Shackleton Ice Shelf.

Both  groups had several scientific missions scheduled and split into mini-expedition parties; at Cape Denison, Mawson formed "the Far Eastern Party" sledging/exploration group to begin exploring the "terra incognita"  which included himself, Swiss explorer Xavier Mertz and Belgrave Edward Sutton Ninnis, a lieutenant in the Royal Fusiliers. Each party not remaining back at their respective bases had a firm return date so as not to miss the Aurora and the journey back to Australia.    It was during Mawson's "Far Eastern Party" enterprise that tragedy struck:  first in a crevasse where much of the group's supplies (including tent) were completely lost, and second, a slow, lingering death when the expedition was already down to only two people. These catastrophic events   prompted a harrowing  solo 300-mile journey back to Cape Denison in beyond-adverse conditions  -- but would it be completed in time to eventually make it back home?

Alone on the Ice is an intriguing and compelling read that brings to life some of the hazards faced by the expedition members.  Mr. Roberts details the tough conditions both on the ice and inside the huts where the men lived in probably the windiest place in all of Antarctica.  While being outside had its own set of problems, sometimes the safety of the base hut was compromised as well.  For example, one of the most interesting stories is that of Sidney Jeffryes,  who served as the Cape Denison radio operator.  Jeffryes was the only member of the crew who knew how to use the radio, but during an overwinter his mental condition started to deteriorate.  While "polar madness" was a known malady at the time, Jeffryes' condition was unlike anything the rest of the crew had ever experienced -- he began to exhibit signs of paranoia, convinced that the men were talking about him or plotting to kill him, and worse.

It was Sir Edmund Hillary who labeled the survival story in this book "the greatest survival story in the history of exploration."  I don't know if that's exactly true, but the book makes for great reading.  It  highlights the career of Douglas Mawson,  a polar explorer I'd only heard of on the sidelines as part of Shackleton's 1907 - 1909 Nimrod expedition. The author has also included some fascinating photos by expedition member and Australian photographer Frank Hurley, whose picture of Shackleton's Endurance stuck in Antarctic ice is famous.    I've seen Alone on the Ice described by one reviewer as "dry," but that is definitely not the case.  If you are already interested in expeditions to Antarctica, especially during their heyday in the "Heroic Age of Antarctic Exploration," this book is one that should not be missed.  I have only two  issues regarding Alone on the Ice: first there are two and only two maps throughout the entire volume, one of the Aurora's journeys between Australia and Antarctica, the other a very undetailed map of the area of the Far Eastern Party's exploration trek.  While reading about the various expeditions taken by the sledging parties, it would have been quite helpful to have maps of their respective forays to gain a better feel for where all of this action was taking place.  There is a map of the journey of the Far Eastern Party, but when I wanted to know more about the locations mentioned by the author,  I had to go online so as to get a better picture in my head mapwise and featurewise. Second, there are a few places where the author repeats himself in terms of one of his sources, a work known as Vixere Fortes, a memoir written by the son of one of the expedition members.  Each memoir reference is accompanied by a statement along the lines that it was written by the son, and must be considered as unreliable.  One time would have certainly sufficed; I take it as an error in editing.  But heck -- these are such minor little niggles that they're almost negligible, considering how well written this book is overall.  I certainly gained a lot of information that a) added to my understanding of Antarctic exploration and b) prompted me to start looking up other sources of information on Mawson and the AAE.  As I've so often said, when a book can do both of those things, most especially encouraging me to dive further into a topic, then it's definitely one I can  recommend.