*Violette Nozière: A Story of Murder in 1930s Paris 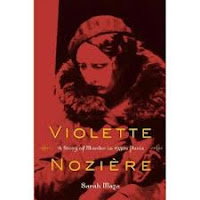 Violette Nozière was the only daughter of Germaine and Jean-Baptiste Nozière.  At age 18, in 1933, she gave her parents each a glass of water "laced with poison," killing her father and sending her mother (who only drank half) into a deep, drugged sleep.  Then she went off and bought new evening wear with money she stole from her parents and hung out with a friend at the La Coupole cafe in Montparnasse, "on the lookout for interesting encounters." While this opening sounds like a prelude to a work of historical true crime, Violette Nozière goes deeper,  examining the crime from the points of view of people living in France (especially in Paris) at this time as well as the sociocultural forces at work during  the period.  At the heart of this study is the question of justice -- in Violette's case, her motivation rests entirely on an accusation that no one at the time really wants to hear, one that actually increased public opinion against her. During this time, the crime that would cause so much sensation, as the author notes, couldn't be pigeonholed into "neat ideological packages," or "familiar scenarios," and left a great deal of uncertainty, an "ambiguity" within which the "meaning of the case for contemporaries" was to be found.  The book is interesting and provides a wealth of detail, not only about Violette and her parents, but also about changes in society as a whole during the interwar period that may have had a bearing on the case.   Looking at this period through various resources (including interviews with people who were there at the time), what the author reveals is that young women like Violette  tapped into the public's anxiety regarding changes in the roles of women, especially in terms of a class system and conventions that were rapidly changing and challenging traditional structures.   At the same time, she examines how the crime, the press coverage and the trial  led to the formation of an entirely new set of sociocultural and political questions that would a) find voice in various ideologies and b) have lasting effects even after the events were over. As the public became glued to the case, Violette came to represent "a sad and lovely ode to perversity...the inverted muse of youth, the scarred idol of a capsized world, the flower of evil of our age,"(163) a celebrity in her own right about whom even songs and poem were written.

I can't critique the author's view since I know little to nothing about this time period in France, but the book is thought provoking, well researched and filled with intricate details down to what someone at a steak house might be ordering for dinner, and it provides many points of departure for those who might want to learn more.  My issues are two: first, there are long, drawn-out discussions that while interesting, also detract from the main points of the book.  For example, the examination of the culture's fascination with crime leads to questions about "what sorts of crime and which criminals draw attention in a given period," and how "murder and mayhem" are "sold and consumed," all very interesting and relevant, but then a highly detailed investigation of the "fait divers," -- "miscellaneous happenings"  ensues, and it is about twenty pages later that we get back to the matter at hand. Iin short, I found an inconsistent quality in the writing that just sort of bothered me.  My second issue is that while I'm always happy with endnotes, there is no actual bibliography here.  There were a few times when I went to the endnotes only to find that the source had been referenced earlier, so I had to slog back through the ones preceding to find the first mention.  That is more time consuming than you might think and frankly, downright annoying.

Still, after having thought about this book, overall, I found it to be interesting and the author posits many points that reflect on our own society as well, in terms of societal/cultural change. I will say that this book is aimed at an academic audience rather than a broader public readership, so you should consider this aspect if you are considering reading it.  Otherwise, it's a good read and for the most part, the author's work is impressive.