Empty Mansions: The Mysterious Life of Huguette Clark and the the Spending of a Great American Fortune, by Bill Dedman and Paul Clark Newell, Jr.

Empty Mansions is a book that proves the old axiom that sometimes truth really is stranger than fiction, and,  I would add, just as captivating.  The centerpiece of this book is Huguette Clark, a privileged, incredibly wealthy woman who chose to live her life happily by staying hidden. Huguette's story may seem to some to be the stuff of madness, but the the authors disagree, calling her  a "modern-day 'Boo' Radley," someone who shut herself away  in order to remain "safe from a world that can hurt."    Huguette died in 2011, at the age of 104, two weeks shy of 105, but her death isn't the end of this story.  As of yesterday, according to a report from one NPR station, jury selection began in the trial to decide who gets what from her estate.  Empty Mansions takes you from the wide Montana prairies to the smaller world of the privileged elite; from a beautiful mansion topped with a golden tower on Millionaire's Row in New York City  to a hospital room next to a janitor's closet in this strange but well-told and thoroughly-researched story.

The book takes the reader through the life of  W.A Clark,  former senator from Montana and self-made multimillionaire known as the "copper king," and his family -- his wife Anna La Chapelle, daughters Huguette and older sister Andrée.  Clark had other older children from a previous marriage, but lived with his second family on New York City's Millionaire's Row in a six-story mansion at Fifth Avenue and Seventy-seventh street.  The sisters grew up in opulence and lived privileged lives, all before tragedy struck with Andrée's death at the age of 16. After having lost her sister and best friend, Huguette was sent alone to a school for the "daughters of elite," where her dance teacher was Isadora Duncan.   In 1925 her father died, but due to the terms of his will, Anna and Huguette moved to an apartment at 907 Fifth Avenue. Huguette married in 1928, but it didn't last, and she was divorced by 1930.  As time went on, Huguette began to stop seeing visitors, becoming reclusive, and eventually stopped leaving her apartment.  Anna died in 1963, and Huguette "throws herself" into her art -- which consisted of painting and meticulously furnishing dollhouses, or more accurately, storyhouses where she could move her dolls (a massive collection) through the rooms, having them do different things, and studying cartoons frame by frame. She spent tons of money on these projects, and was also very generous with her money among friends and supporting worthy causes (along with paying for upkeep of the "empty mansions" she'd inherited) from her "fairy-tale checkbook,"  but above all valued her privacy, trusting in her attorney and her accountant to handle all business transactions.  But Huguette had also been getting treatment for skin cancer, and when her doctor died in 1990, she didn't look for another one, and all the while she was getting worse. A friend persuaded her to go the hospital for treatment, and she ended up at Doctors Hospital,  a "treatment center for the wealthy,"  in New York City.

The story of the Clarks, the author says, is also  "like a classic folk tale" in reverse, with

"the bags full of gold arriving at the beginning, the handsome prince fleeing, and the king's daughter locking herself away in the tower."

Now, as if the dollhouses weren't weird enough, this is where the story starts getting just plain strange and even worse,  just plain sad.   At the age of 85, within two months of  Huguette's surgeries, she becomes an "indefinite patient," at Doctors Hospital,  choosing to remain there for the rest of her life, never telling family where she was, ordering everyone to respect her privacy at all costs.   According to the authors,  within a month, one of her doctors alerts the hospital's powers-that-be Huguette is the daughter of a multimillionaire, and that he'd be willing to help develop an "appropriate cultivation approach." Behind her back, they made fun of her, but the hospital officials hold meetings to figure out how to get her to give up some of her money.  The president of the hospital, again according to the authors, boldly says that


"Madame, as you know, is the biggest bucks contributing potential we have ever had."

The doctors go all out trying to get her to cough up in a number of measures that can only be described as coercive.

[As an aside, I'm a notetaker when I read, and going through them now, I see I had a "holy sh*t" moment that I noted in the margins when I came upon a scheme to get her to sign over her assets in a "charitable gift annuity"  scheme -- 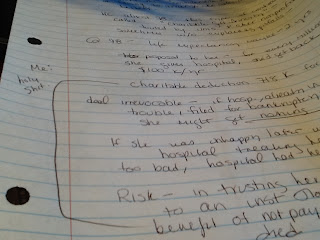 that carried much more risk than benefit for this 98 year-old woman.]

It wasn't just the officials or her doctors who got part of her money, either, one of them outright blackmailing her into loaning him  an extra $500,000 on top of the million she'd already given him.  Her private nurse/companion is Hadassah Peri who also came to benefit from Huguette's generosity, as Huguette gave her and her family several "gifts" of cash and property, coming to over $30 million dollars.  Every now and then Peri would just happen to mention some monetary issue she was having, and Huguette would take care of it.  For example, Peri once told Huguette that her kids have asthma and there was a flood in the basement.  Huguette tells Peri she should really move, and hands her $450,000 for a new house. Christmas gifts came in the form of tens of thousands of dollars, she paid for Peri's children's schooling, their summer camps, back taxes the family owed to the IRS, a new house for Hadassah's brother and family to use when they were in town, and the list goes on and on and on.  She was being taken advantage of by pretty much everyone, including Citibank, who'd earlier lost millions in jewelry she'd had in safety deposit boxes, and only allowed her to settle for a maximum amount, playing on her need for absolute privacy and knowing she'd never take them to court.  By the time of her death, Huguette was cash poor, and had been selling off extremely valuable possessions  to pay for the little "gifts" she gave out as well as the taxes attached to the gifts.

The empty mansions of the title refer to the places that had been acquired by the family over Huguette's lifetime, and then rarely, if ever used, and the chapter headings carry the names of the properties. Each one, including Woodlawn Cemetery, had been kept up by Huguette as places to preserve memories, and were left frozen in time with orders to the caretakers not to be disturbed in any way.

This is truly an incredible story, and I've thrown it into the book group mix this year.  I will say that the first parts of the book that went back to the days when W.A. Clark was making his fortune and building up a tarnished reputation as a Montana senator were pretty dull, and that I almost put the book down.  Once the early history was finished, however, the story picked up with a vengeance.  There were parts that shocked, parts that made me downright angry, and parts where I couldn't tell whether Huguette was mentally disturbed, easily taken advantage of or coerced,  or whether she was just exercising her right to spend her money the way she chose to. I just wanted to know her story and how she got to the point where she chose to stay in a hospital for twenty years, but it turned into much more than that.  There are some really good points raised  in this book, but in the end, I discovered that it actually raises more questions than it answers.  That's not a bad thing, and there are probably things that will never be known, even when this upcoming trial gets underway.

Definitely recommended, and while not all reviews have been positive, I don't really pay attention to them when I find something I've really liked reading.  If you are looking for something beyond the ordinary, you'll definitely find it here.
Posted by NancyO at 4:00 PM

Email ThisBlogThis!Share to TwitterShare to FacebookShare to Pinterest
Labels: biography/memoir