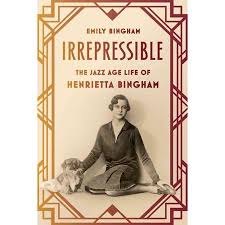 I rarely, and I do mean rarely, ever pick up a biography about someone I've never heard of before.  Normally I have at least some sort of fleeting knowledge of the subject, or  I choose books where I'm quite familiar with the person under study, but not in this case.  Had it not been for the little blurb about this book in The New Yorker,  I probably would never have even known this book had been published.  As things turned out, I was totally captivated by the story of this "wealthy, charismatic lesbian debutante from Kentucky."  On the other hand, sometimes I wasn't as enthralled by the writing (more later), but Bingham's story kept me up reading through the night and on into the entire next day.  I seriously couldn't put it down.

Just briefly, Irrepressible is written by Emily Bingham, a great-niece of Henrietta Bingham's, and she literally tries to "unpack" Henrietta's story as the book moves along. She'd always known about her great-aunt, the one the family called "an invert," but in an attic of the family home, Emily Bingham discovered quite a treasure trove of  Henrietta's belongings (including letters) that set her on the path to discovering for herself just who this woman actually was.

Henrietta was born in 1901; her family at the time was quite socially prominent, the Bingham family achieved quite a raise in status and financial circumstance after father Robert's second marriage to Mary Lily Flagler, widow of Standard Oil co-founder Henry Flagler.  But I'm a bit ahead of the story here.  Henrietta's mother, Babes, was killed in a horrible car accident when Henrietta was only twelve; coming up on a railroad crossing, the driver of the car (Henrietta's uncle) took a moment to wipe the dust off of his glasses, and somehow failed to notice the oncoming train.  Henrietta was there when it happened; her father wasn't, but ever since that horrible and traumatic event,  her father (often referred to as "The Judge") came to depend on Henrietta for emotional support even after he married Mary Lily and then again when he married a third time, on which occasion, the author notes, Henrietta spent five hours vomiting in reaction to the news.   As the author notes,


"Her mother's death before her eyes left an open wound -- an an opening for an unusually close partnership with her father that both empowered her and made her weak."

This strange sort of interdependence between father and daughter had a beyond-huge effect on Henrietta's life, a point that the author returns to time and again throughout the book.  As one reviewer puts it, she became "an emotional surrogate" for the Judge's "adored dead wife" even through his two marriages, right up to the time of his death.

Henrietta's story is compelling -- from her romantic affair with her English professor at Smith (Mina Kirstein) at the age of 21 until her death in 1968.  Emily Bingham has done an amazing amount of research about her great-aunt; sadly, information about her later life is rather lacking in terms of documentation.   She takes us slowly through Henrietta's life as she charmed and romanced members of the Bloomsbury set in 1920s London, started a long-term course of psychoanalysis with Ernest Jones, initially at Mina's behest (Kirstein hoping Jones could "cure" her of her own homosexual tendencies).  As it turned out, Jones became someone in whom she could confide about the "seductive ambivalence" toward the Judge, which ultimately would add to Henrietta's emotional and mental burden, even though the psychoanalysis "did not banish the anxiety and depression that stalked her."  We are privy to her various affairs with both men and women, her desire not to constantly be at her father's beck and call so that she could have some measure of freedom,  her unflagging support of her father when he became FDR's Ambassador to Britain just prior to the beginning of World War II (a position which was later taken over by Joseph Kennedy) and then her life, at least what's known about it  through the Judge's death and beyond.   One of the key ideas in this book is that while Henrietta had a large measure of freedom in terms of same-sex affairs as a young woman as long as she didn't flaunt things (her father even gave his tacit approval to her lesbian relationship with a tennis star with whom she lived while he served as ambassador), but as times changed, shifting morals,  homophobia, and Henrietta's status vis a vis her family's prominence in Kentucky  added to her already-overburdened mental state and ultimately contributed to her mental deterioration.

While I loved the subject and while I was cliche-ingly glued to this book, there were times when I kind of did the odd eyeroll or two over the author's writing -- very minor quibbles, to be sure, but still a bit annoying. Sometimes when she was describing people in the Bloomsbury group, there seemed to be much more about them personally than about Henrietta's relationship to them until she turns things around and gets back on track again, steering things back toward relevance to Henrietta.  She tends to do this quite a bit in other places as well with other people in Henrietta's orbit.  Two other stylistic examples stuck in my head. First, when discussing Henrietta's doctor in the mid-1940s starting her on prescription drugs, she writes


"That fall, Dr. Ackerly prescribed Henrietta the barbituate secobarbital (or Seconal) to assist with her withdrawal from alcohol, but probably also to ease her anxiety and depression."

That certainly isn't problematic, but then she goes on to note that "These were the 'dolls' made famous in the 1966 novel Valley of the Dolls."  Necessary point? I don't think so. Later, again in a section about an overdose, she writes


"She found stimulants such as Dexedrine and Dexamyl, which Henrietta took to face life each morning and to control her appetite, along with sedatives -- Seconal, Dormitol, and Dormison -- which she needed to close the world down again,"

followed by this: "Pharmaceuticals have their own cold poetry".  Huh??

I will say however that the things that make this such an intense and compelling novel -- Henrietta herself, her family's history, her ongoing desire for the freedom to be who she wanted to be and the obstacles that so often got in the way, as well as her later tragedies -- far outweigh my niggles with the occasional writing issues, making for one hell of a good book.

Email ThisBlogThis!Share to TwitterShare to FacebookShare to Pinterest
Labels: 2015, biography/memoir