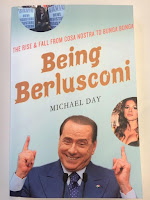 hardcover; my copy from the publisher. Thank you!

"His only value is money and his only objective to save himself."

My introduction to this "Teflon tycoon," believe it or not, was through reading the Salvatore Montalbano novels  of Andrea Camilleri, one of my all-time crime-fiction novelists. I've been reading him for years;  he's another crime-fiction writer who integrates social and political commentary into his work, and Berlusconi has been a target of his for some time.  Then in June 2011 (I just plowed through my back issues to check the date) I was reading my New Yorker and I found an article called "Basta Bunga Bunga" by Ariel Levy which perked up my interest in this man even more,  and I've been following his antics ever since. And trust me, he is a man worth watching.  When I first got this book in the mail, the cover made it look like a tabloidish sort of thing so I was a bit hesitant, but as things turned out, I didn't need to worry at all -- not Day's style.

The subtitle of the book, "The Rise and Fall from Cosa Nostra to Bunga Bunga" is an apt descriptor of what this book covers. Author Michael Day has tracked Berlusconi's rise from his first inroads into his multi-billion dollar empire (reputedly with money from the Mafia)  through his being banned from ever seeking political office again and the sex scandals which became very public  --  a) a colorful story to say the least and b) a reminder of exactly what can happen when one man (and his cronies) abuses his power of office.    Just to set the record clear, in answer to one reader-reviewer's comments, Being Berlusconi is not meant to be the ultimate biography of this Italian former prime minister; rather, it is exactly as stated in the title: it is the story of Berlusconi's rise as a businessman (through real estate and sleaze TV)  and politician and then his decline and fall from political grace. Day takes the reader through his subject's  three terms as prime minister, clearly evoking the high levels of corruption emanating from his office ( For example, in the face of legal trouble, Berlusconi's parliamentary supporters simply came up with laws designed to make it nearly impossible for any decisive court action to touch them, or they bought off magistrates), but also examining the hot-ticket items (taxes, especially) that would convince voters to keep this man in office, despite everything he's done.  Day also puts Italy's politics and culture into perspective, explaining why people were so taken with Berlusconi.  He explains  the existence of Italy's "all-pervasive" culture of


"partisanship and cronyism -- with family, friends and tribe doing everything in their power  to keep their their grubby grip on social financial advantage,"

and how Berlusconi "exploited Italians' adherence to the creed," taking "its grip on the country to a whole new level," causing him not to work "in the best interests of the nation," but rather to keep alive "the friendships and loyalties" he needed to sustain his "business interests, runaway libido and legal battles."

While most people probably are aware of Berlusconi for his sex-related scandals with young girls (including the notorious "Bunga Bunga" and Rubygate scandals), Day clearly shows that there's more to this guy than just being a lecherous politician  -- while he certainly delves into Berlusconi's amoral side,  he reveals exactly how intelligent and savvy this guy really was, literally stopping at nothing to increase his political and economic clout. While "Bending the rules and benefitting (sic)  from friendships, acquaintances and associations is endemic to Italy," Berlusconi clearly made it an art form.  As Day states, the reality was that  Berlusconi "simply -- and very skillfully -- exploited ambivalence toward the rule of law that was already there."    At the same time, the author shows his readers a Berlusconi who is plainly an idiot. As just one example, he showed up uninvited at a Holocaust memorial ceremony held in Milan,


"...which marked the opening of the commemorative site at the city's Central Station.It was from this forbidding fascist-era structure that thousands of Italian Jews were sent in trains to the death camps"

Berlusconi snoozed through the entire ceremony, then when it was over, took to the press to say that Mussolini "hadn't been that bad -- apart from those slightly draconian race laws -- and had done some 'good things.' " Or then there's the time, after the 2009 L'Aquila earthquake where he said something along the lines of how people made homeless because of this devastating quake should look on it as an adventure -- a sort of camping trip.  As one person summed up Berlusconi so nicely, "His only value is money and his only objective to save himself."

Being Berlusconi is a fascinating look at this "trash-TV mogul" who over the course of three terms as Prime Minister "left Italy to economically stagnate, morally decay and in some cases, physically fall apart."  If you have to ask who is Berlusconi, it is either not the book for you OR it is a great place to start if you're at all interested in the people behind the scenes of international politics.  It is in no way boring -- and seriously, every time I'd turn a page I'd wonder just what this guy was going to do next.  To answer reader's criticisms of this book, it is definitely not meant to be a tabloidish sort of exposé or a trashy beach read, so if that's what you're expecting, forget it.  This guy, plain and simple, is a living example of the perils of letting personal interests come before the needs of a nation.

my thanks to Palgrave Macmillan for my copy.