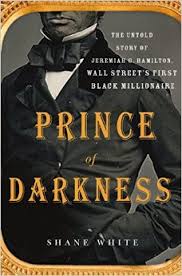 hardcover -- my copy from the publisher, thank you!

"Jeremiah Hamilton took New Yorkers on at their own game and beat them at it." -- 317

It's very interesting that Shane White would choose Jeremiah Hamilton as the subject of his study, since there is very little information on this man to be had. Even though he was "Wall Street's First Black Millionaire," "sui generis, typical of nothing," almost nothing is known about him, which seems quite odd -- after all, in the 1850s, an African-American man with the kind of wealth Hamilton had amassed was unusual; given that he was also a "Wall Street adept, a skilled an innovative financial manipulator," it seems to me that there would be a LOT of material out there from which White could pick and choose.  But it didn't turn out that way -- Hamilton, in White's words, "became all but invisible" for over a century, even though he'd lived and worked in New York for more than forty years. No dissertations, no articles, and not even a mention in the African American National Biography completed in 2008 to be had about this man.  So Shane White had to rely on New York City's public records for his study -- "Newspapers, court cases and government files," as he notes, but there is pretty much nothing directly from Hamilton himself.  I mention the lack of documentation here because it is important to remember this fact as you go through the book.  It is important for the reader to understand that while there is certainly plenty going on in Hamilton's orbit that White carefully puts together, sometimes the book ranges off into looking at other, more influential people of the time rather than staying focused on White himself.  What really sold me on this book though was the combination of what little could be found on the man and the background history of the attitudes of antebellum white New Yorkers toward African-Americans.

Just briefly, Jeremiah G. Hamilton starts in this book as an enigma.  Even his birthplace is unknown -- he either came from somewhere in the Caribbean or from Virginia, both of which he claimed as true on various census reports.  In Haiti he was involved in a huge counterfeiting scheme as a very young man, but managed to escape imprisonment and come to New York, and the people behind the whole criminal enterprise remained a mystery while being grateful.  Hamilton began borrowing cash left and right (spawning several interesting lawsuits since he decided he'd much rather not pay back the money and really pissing off a lot of people), but the kicker came with Manhattan's 1835 "Great Fire" when a number of records were destroyed and Hamilton decided that with nothing legal linking him to anything, all he had to do was to deny that any transactions had occurred, walking away with the cash. This is how he ended up being known as "The Prince of Darkness."  He "never believed in turning the other cheek," was the instigator of several lawsuits himself, using "the fine print in legal documents as a razor." He was also a  man that a person never crossed without some sort of retaliation, as one judge found out the hard way. His eccentricities included wandering the streets wearing a long, dark, flowing wig, but people were used to this.   Hamilton was married to a white woman with whom he had children and lived well; this fact came to a head only during the Draft riots of the early 1860s when a mob took issue with the mixed marriage and stormed his house looking for him. But on the whole, he was a lucky man -- White notes that


"To a considerable extent, money insulated from the worst of the city racial problems. He could live in his nice house on East Twenty-Ninth Street, looking back down to the city, and feel that he and his family were relatively safe."

Hamilton didn't really socialize with other African-Americans, and actually at one point had to declare bankruptcy.  Interestingly enough, as White notes, in the census reports of 1850, 1860 and 1870 he "was counted as a white individual;" even when he died of pneumonia in 1875 the doctor failed to fill in the entry for Color. According to White,


"it seems that, neither for the first nor the last time in American history, money lightened the color of an individual's skin."

Hamilton was indeed lucky -- as White points out, racism was rampant in New York City of the time, and segregation akin to what would later become known as Jim Crow was everywhere.  The background history of racism in New York was actually my favorite part of this book -- a definite eye opener since I'd always thought that  so many freemen and slaves came North and had been welcomed.   And while there was no slavery in New York, white people were still on edge because of the independence of Haiti -- White does an excellent job linking the overthrow of Haiti's colonial masters to the rising fear of African-Americans in the United States of the time, both north and south.

While I enjoyed this book for the most part, the problem with White's account lies in the very fact that there's very little real information about the guy outside of the public records and newspapers and he seems to want to make up for it by adding in more than is technically necessary.   As a result, along with the history of race relations of the time (which as I've stated was quite good and definitely a much-needed part of this book), he tends to expand sections by telling his readers about the growth of the newspapers, the lives of other prominent people in New York (both white and African-American), etc., and sometimes I found myself sort of skimming through hoping to get back to Hamilton.  I'm someone who can sit down with books of history that are not meant for the general public and love them, so I don't think it's my attention span.

Overall, I don't know if I'd really classify this book as a work of history for the general public, but it is definitely well worth reading on many levels.  If nothing else, just the  fact that Hamilton was the first African-American millionaire but he's not even listed  in the African American National Biography begs the question of why he's been ignored for so long and why historically, he's a forgotten figure. And considering that Mr. White spent years of his life trying to find out who this man really was and had very little to go on, I'd say he's done a fine job here and gave his subject as much life as he possibly could.  You really can't ask for much more.