Deep South: Four Seasons on Back Roads, by Paul Theroux 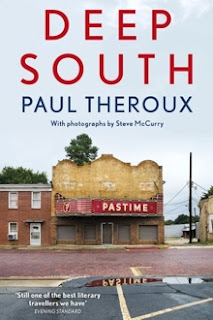 Paul Theroux has written some incredible travel narratives -- my favorites (of the ones I've read) are his Great Railway Bazaar and Riding the Iron Rooster, but there's something to enjoy about all of his books. In Deep South, it's the author's ability to a) reflect the beauty of the southern landscape through his writing and b) encourage strangers he meets to open up about their lives that really made this narrative work for me.

Theroux has traveled all over the planet, but in this book he's changed directions and stays in his own country -- more specifically, he makes several tours through the "deep south," discovering and examining the paradoxes that exist there. Making his way through South Carolina, Alabama, Arkansas and the Mississippi Delta area by car, he spends four seasons visiting some of the poorest rural areas in this part of the country. He takes to the "proud highway, the rolling road," starting from Cape Cod with no specific destination in mind, at least on the first trip.  What he discovers (among many other things) is that, as Faulkner noted in his Requiem for a Nun, "the past is never dead. It's not even past."  I will leave it to others to find out why and how this is true, because I could go on at some length about what he encounters on his various sojourns -- there's a lot packed into these pages.

To be very honest, there were parts of this book that were repetitive that I didn't care for much -- the repeated visits to gun shows and the discourse on why there are so many Patels who own seedy motels in the South are just two examples of overkill here  -- but if you can get past that, he does have some very good points to make in this book.  Most eye opening to me is the idea that many of the poorest areas in the southern United States are that way because of the ongoing legacy of the South's racist past combined with the loss of industry (moved to foreign countries after NAFTA was passed) that put huge numbers of people who had decent, steady jobs out of work and into the margins of society. There's another thread running through this narrative about how the US Government spends way more money on helping people in third world countries with housing, etc., while ignoring its own people; the upside, however,  is that there are a number of people in these small pockets of rural poverty who are there to help the locals through various programs supported by grants and other sources of funding. It's not enough, but it is definitely a move in the right direction. Here, as he notes,  the poor are "less able to manage and more hopeless than many people...in distressed parts of Africa and Asia," and that the United States, "singular" in its "greatness," "resembles the rest of the world in its failures."

Maybe Deep South isn't perfect, but I've been on some of those roads in Alabama when we did an African-American  Heritage Trail roadtrip and I have to say, he's captured the landscape, the poverty and the racism that I witnessed for myself along the way. He has also captured the cautious but overall warm attitudes of the people he meets on his travels that I  experienced as well.  Let's just say that whoever says we're living in a post-racial society hasn't seen what I have during my own travels.  There is at least one professional reviewer who sees this book as reopening "Deep South cliches,"  and there are several naysayers among readers who complain about Theroux's "agenda", but this is a book a reader must judge for himself or herself. To me it was a real eye opener of a narrative -- strengthened  by the stories of people who live the realities of the Deep South on a daily basis.

Recommended but watch out for the ongoing repetition that just sort of needlessly weighs this book down.  And maps would have been helpful -- but the photos at the end of the book are just amazing.