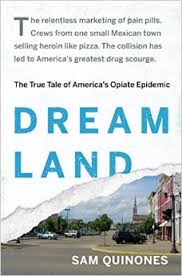 It is no secret that there is a massive heroin epidemic in this country.  After finishing this book this morning, I spent quite a lot of time online researching the topic and it's a hot one. Less than two years ago, a  writer for the West Virginia Gazette made the claim that "West Virginia has the highest drug overdose death rate in the nation." That same year (2014) The Atlantic reported that


"Ten years ago prescription painkiller dependence swept rural America. As the government cracked down on doctors and drug companies, people went searching for a cheaper, more accessible high. Now, many areas are struggling with an unprecedented heroin crisis."

The Economist has also weighed in, and now this "unprecedented heroin crisis" has even become a hot topic among current American presidential candidates who are adding this problem to their respective platforms.

This heroin epidemic and the unprecedented amount of deaths from overdoses is a topic that has largely been kept under wraps out of shame for the most part, largely from white middle- and upper-class parents who didn't want anyone else to know that there was a drug problem in their homes. However, today's  heroin problem seems to have had its roots in "Appalachia and rural America," or as the author calls it "the voiceless parts of the country." Formerly, New York had been the "country's heroin center," serving as "the nation's principal heroin hub through most of the twentieth century."  That all changes with the targeting of more rural areas by enterprising dealers from a very small area in Mexico, known as the Xalisco boys.

Dreamland takes its readers into examining the burgeoning heroin problem. In doing so,  the author questions and charts how the "realities of American medicine and medical marketing of the 1980s and 1990s" came to be "connected to why, years later, men from a small town in Mexico could sell so much heroin in parts of the country that had never seen it before."  Several things come together here: 1) the methodologies of these small-town dealers, 2) a huge unprecedented push by a leading pharmaceutical company trying to market and sell their opioid wares, most importantly for this book,  OxyContin, 3) economic decline in formerly industrial areas, and 4) the changes in how doctors treated pain among their patients (along with changes brought by managed health care).

Using Portsmouth, Ohio as an example, he tracks how a city that in 1979 and 1980 had been flourishing and had been selected as an "All-American City," had declined to a level of a "Junkie Kingdom" by the 1990s.  In Portsmouth at the turn of the century,


"Purdue Pharma's promotion of OxyContin and the crusade to liberalize opiate prescribing were seeing their first noxious effects across southern Ohio, West Virginia, and eastern Kentucky. Portsmouth for a while had a pill mill for every eighteen residents."  (207)

There were so many pill mills around Portsmouth that it "became a destination..." bringing in people from Ohio, Kentucky, West Virginia and Indiana.  The increase in SSI due to scarcity of jobs in these areas  also increased the number of people receiving Medicaid. One Portsmouth city nurse said that they "had always assumed that Purdue Pharma knew that so many people [in the area] had Medicaid cards... and that's why they marketed OxyContin so hard around here."  Switching gears for a moment to the marketing of OxyContin, Quinones notes the following:


"The decade of the 1990s was the era of the blockbuster drug, the billion-dollar pill, and a pharmaceutical sales force arms race was a part of the excess of the time. The industry's business model was based on creating a pill -- for cholesterol, depression, pain or impotence -- and then promoting it with growing numbers of salespeople. During the 1990s and into the next decade, Arthur Sackler's vision of pharmaceutical promotion reached its most exquisite expression as drug companies hired ever-larger sales teams. In 1995, 35,000 Americans were pharmaceutical sales reps. Ten years later, a record 110,000 people -- Sackler's progeny all -- were traveling the country selling legal drugs in America." (133)

As stated earlier, Sackler "founded modern pharmaceutical advertising," even getting his "drug-company clients" to sponsor and pay for continuing medical education, seminars attended by doctors as part of a requirement for them to keep their medical licenses.  There, he most aptly realized, "drug companies could grab the ears of physicians."

Buying and selling OxyContin (which people would crush and smoke for faster effect) led to more than a few entrepreneurial types driving "addicts"  to pain clinics, taking half the pills the addicts would receive with their prescriptions, and then selling them.  One Portsmouth woman, looking back, described her business as "resembling a McDonald's drive-through."  Tough times required tough measures, and soon Portsmouth even had an economy built on pills.  Then, right behind the pill mills, "heroin came to town," in Southern Ohio at much cheaper prices and easier to acquire.  This same pattern would be repeated again and again throughout a number of states, with the Xalisco boys at the wheel driving their product to people "already tenderized" by OxyContin, leaving law enforcement by and large unable to keep up.

The dealers from Xalisco started in Los Angeles'  San Fernando Valley, figuring out how to "take heroin off the street, out of the parks," by delivering the drug after receiving a phone call directing them to their clients, almost like an Uber service for heroin delivery.  By figuring out what the cops and federal agents were looking for and doing exactly the opposite (no large amounts of heroin on their person, no drug stashes in their rented apartments, and paid drivers), they did very well. They carried no weapons, avoided the drug gangs that controlled the streets of LA, and were quite successful.  They also expanded their markets, avoiding bigger cities and started noticing patterns -- for example,  people gathered at methadone clinics who would be interested in their very cheap product and low-risk, personalized delivery service. As members of different "cells" were arrested, they were replaced just as quickly.  Of course, they weren't the only game in town as far as heroin goes, but they had a model that both worked and appealed to their customers,  delivering heroin "like pizza."

Obviously, I have understated what's to be found in this book, but for anyone at all interested in this topic, Dreamland is a work of investigative journalism that lays bare the roots of our modern heroin epidemic, and as Philip Eil notes in his article at The Millions, the "wide-reaching approach" taken by the author "seems necessary to convey the 'catastrophic synergy' when the paths of Purdue Pharma and the Xalisco Boys cross." Whether or not you agree with the author's conclusions, it is a fascinating book and I for one, couldn't put it down.  Looking at what other readers had to say about it, a lot of people zone in on the repetition that is found throughout and I can understand their complaints -- the number of times he uses the phrase "delivering heroin like pizza" is frankly annoying. But this is a very minor complaint that seems pretty irrelevant in comparison to what a reader will come away with after finishing this book.
I highly, highly recommend this book -- it is an eye-opener.
Posted by NancyO at 1:05 PM