Methland: The Death and Life of An American Small Town, by Nick Reding 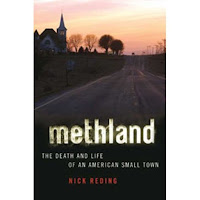 "... none of this is about a drug. It's about a system of government and an economy."

"...If ever there was a chance to see the place of small American town in the era of the global economy, the meth epidemic is it."

I enjoyed reading this book so much that I got a bit carried away with using small sticky-tab arrows on the side of its pages to mark things I really wanted to remember. I see now that it's pretty much impossible to make time and space for every marked page, so I'll do what I can. Just to be clear here, this book is not an exposé or a voyeuristic look into the lives of all of the meth addicts in this town, nor is there anything along the lines of say "Breaking Bad" here, so readers who are into that sort of thing should probably move along. This book is serious business and deserves to be read as such.

Methland  is a book very much worth reading. Even if there are people out there who pooh-pooh the idea that there's a meth "epidemic" sweeping small-town rural America, what really struck me was the bigger implications of, as the dustjacket blurb notes, "the connections between the real-life people touched by the drug epidemic and the global forces behind it."  As Mr. Reding states in an interview,


"...people are trying to destroy small town American life. And they're doing it economically...That's what big agriculture is doing and that's what the pharmaceutical industry is doing. Going back to the Clinton years, there's this notion that globalization is somehow beyond criticism, that it's a pure form of self-sustaining economic perfection.  It's not true, and if you'd like to see where it's least true, go to Oelwein."

Oelwein, Iowa is the launching point of this book; it's a town which has been "left in the dust by the consolidation of the agricultural industry, a depressed local economy, and an out-migration of people."  It's also a place where "the economy and culture" are


"more securely tied to a drug than to either of the two industries that have forever sustained the town: farming and small businesses."

However, it's not just Oelwein that is facing some pretty serious issues in this story.  While he makes people in Oelwein the central focus of his book, and examines the town's changes and its problems through their eyes, it is also very clear that what has happened there is happening throughout the midwest.  Oelwein, which was "on the brink of disaster" by May 2005,  is just one focal point for examining how the lobbyists and government supporters of both Big Agriculture and Big Pharma, as well as the effects of free trade (vis-a-vis NAFTA) have all contributed to catastrophic changes in rural, small-town America, which in turn contribute to the rising meth epidemic in these areas.


"Meth's basic components lie equally in the action of government lobbyists, long-term trends in the agricultural and pharmaceutical industries, and the effects of globalization and free trade."

and, in another interview, speaking about America's drug policies, the author sort of ties together all of these interconnected "components":


"Drugs here are about economy and politics. For instance, that legislation designed to give Big Ag enormous breaks in fact makes drug distribution easier in two ways: one, it sucks revenues out of towns that become major trans-shipment points; two, it draws more illegal immigrants, who traffickers use as mules. That's just one small example of the interrelation of things, and of how treating drugs as though they exist in a vacuum free from the influence of politics, economics, and sociology is essentially useless."

While it's important to understand exactly how all of these components are interrelated and how this combination has become absolutely devastating to the towns, the people, and the overall well being of small-town, rural America,  the most fascinating parts of this book to me is the author's examination of the role and the power of Big Agriculture, huge conglomerates with their own powerful lobbyists and their own government supporters -- and I have to admit that for the most part, I had no clue that any of this was happening.

For a brief peek, one huge part of this book revolves around the changes in the food industry, most specifically, the area's meatpacking industries which for decades had supported a large proportion of wage earners.  When the area's Iowa Ham Plant was sold to Gillette in 1992,  the new owners made changes right away. For one thing, they "dismantled" the union, and worker wages plummeted. Aside from lowering the wages (the example given here was a drop from $18 to $6.20 per hour), while employed by Iowa Ham, the employees had benefits as well as stock ownership, which all went away.  A number of employees took on double shifts, using meth as a way to keep themselves awake and productive through both.   Medical coverage disappeared, and there was no guarantee of workers' comp in the event of an injury.  Within a year, a number of employees came to see the company doctor, who had noticed a rise in depression and an accompanying rise in drug use, noting that they were "turning to meth."

Employees fared less better when Gillette sold to Iowa Beef who sold to Tyson; not only did wages decrease with each turnover but by the time Tyson shut the plant completely in 2006, there were 99 workers left, a huge cut from 800.  This same sort of scenario repeated itself in Ottumwa, Iowa, where Hormel plant workers met pretty much the same fate when the company was bought by Excel Meat Solutions, a subsidiary of food-giant Cargill.   The paring down of the competition meant that bigger corporations,


"...the surviving companies, like Cargill, begin to effect political decisions through their enormous lobbying capabilities. The government no longer governs unimpeded: it does so in tandem with the major companies..."

Reding also points out that as Cargill "consolidated more and more of the meatpacking industry -- and the food industry in general,"  there was a growth in its lobbying power, its political leverage, and its profits.  To keep costs even lower, the author says, some of the meatpacking companies began "courting" undocumented workers from Mexico, hiring them at "abysmally low wages."   When adding in unemployment related to the decline of other industries, people leave, tax revenue shrinks, less services can be offered or paid for, local education suffers, infrastructure suffers, and all of that (and more) takes its physical, mental and emotional toll on the entire town. And then there's meth use and production within this small town: while  Reding states explicitly that it would be "hard to argue convincingly" that "the surge in meth use in Oelwein was a direct result" of the wage cuts,  he does say that that it's pretty much impossible to not notice the "400 percent increase in local meth production at the same time," if one goes by the number of meth labs that were "busted.

While, as I said earlier, how these all come together to create this sad and most untenable situation is the main thrust of this book,  it is also a story about real people in a real town with real lives, some of whom have shared their experiences with the author to offer firsthand accounts.  Many of them have through no fault of their own been caught up in circumstances largely beyond their control; some of them do what they can in what seems like a hopeless situation.   Personally, this book not only opened my eyes, but the author's research and his own observations made for great reading on a human level as well. This is also a book that seriously pissed me off -- as it should for anyone who reads it.

Lots of readers have made several complaints about errors running throughout this book;  I didn't take the time to stop and look at that sort of thing because I was way more concerned about what the author was actually saying, which is backed up with actual research.  Once again, whether or not readers agree or disagree with the author's conclusions, this is a book that needs to be read. Highly recommended.
Posted by NancyO at 3:44 PM