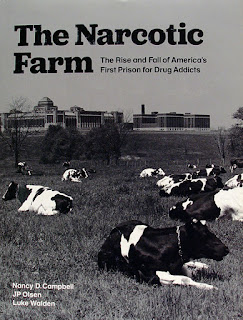 The Narcotic Farm is a companion book to a PBS documentary of the same name.  The film itself is available online at Vimeo -- I watched it yesterday and just sat here sort of spellbound the entire time.  UPDATE: 2/29/2016: sadly, the documentary at Vimeo seems to have been pulled because of copyright issues.  Well, then, to whoever owns the copyright: why don't you put it on dvd at least so other people can watch it?????

I first heard of this book while reading Sam Quinones' Dreamland - up to then I had absolutely no clue that this place even existed.  The United States Narcotic Farm opened in 1935, just outside of Lexington, Kentucky; it was,  as the book notes,


"an anomaly, an institution where male and female convicts arrested for drugs did time along with volunteers who checked themselves in for treatment."

In the 1920s, increasingly-strict drug laws and "aggressive enforcement" led to addicts being sent to prison "in droves," where they proved troublesome -- bringing drugs inside and getting non-addict prisoners hooked.  The authors note that by the late 1920s, about "a third of all federal prisoners were doing time on drug charges."   Social progressives of the time also took issue with the arrest of addicts, believing it to be "unjust" - so in 1929 two "government bureaucrats" lobbied for a measure that would create prisons just for convicted addicts, and by 1932, the construction of first of these institutions (the other in Ft. Worth) was underway.   Its administration fell under both the US Public Health Service and the Federal Bureau of Prisons - and on the day it opened the first director, Dr. Lawrence Kolb stated that addicts would not be sent to prison for what was basically "a weakness," but they would be able to receive


"the best medical treatment that science can afford in an atmosphere designed to rehabilitate them spiritually, mentally, and physically."

They would not be "prisoners," but rather "patients." "Narco," as it was called by locals, was built on a thousand acres of farmland, the idea being that sunshine and hard work on the farm (and in other jobs) would help keep patients on the road to recovery and "cure both immoral behavior and also bad health."   It was a great idea -- not only  were people  lining up at the door to be admitted as an alternative to being thrown into the federal prison system, but it was founded on the question of whether addiction was a criminal offense or an illness that might possibly be treated, a question that still resonates today. It also served as an addiction research center, "the only laboratory in the world that had access to a captive population of highly experienced and knowledgeable drug addicts," where scientists tried to understand "the mysteries of addiction."   The book reveals that the legacy of the addiction research center [which moved to Baltimore and continued research under the auspices of the National Institute on Drug Abuse (NIDA)], is that it


"established an entire scientific field and formulated the current definition of addiction as a chronic, relapsing brain disorder. It also trained a cadre of addiction specialist who themselves went on to work as heads of medical schools, government officials, directors of drug treatment centers, and leaders in addiction research."

The book and the documentary together detail the story of Narco from its beginning in 1935 through its final days forty years later.  Some interesting highlights of its history include a few notables who passed through its doors -- both William S. Burroughs senior and junior,  as well as a host of jazz musicians including Chet Baker, Lee Morgan, and Sonny Rollins. Both Burroughs, father and son, wrote books about their time at Lexington: Senior in his Junkie, where there's an entire section about him signing himself in," and Junior with his Kentucky Ham (which I'm planning to read soon)  detailing his time as a patient there.   However, as time went on, it became quite obvious that the "cure" wasn't working, but I'll leave it to readers to discover why this was the case.  The institution's addiction research center also became the subject of congressional hearings in the 1970s regarding human experimentation soon after the story broke on the Tuskeegee syphillis experiments (the subject of James H. Jones' most excellent book Bad Blood),leading in part to the center's demise.  Interesting as well is the fact that the director, Harris Isbell, had accepted funds from the CIA over a nine-year period  as part of the CIA's research for MK-ULTRA and had given prisoners the drug, although to be fair, he notes that it was actually done as part of legitimate science.  It wasn't just LSD, though -- all manner of narcotics and other drugs were tested on the prisoners, who, by the way, were rewarded with the choice of drugs (go figure) or less time for their services.

The Narcotic Farm, in combination with the documentary, is absolutely fascinating. It is mainly a book of photos from the time with accompanying text, but it is certainly well worth the read.  It opens a brief window not only into attitudes about addiction at the time, but medical ethics, notions of treatment, and quite frankly it's both disturbing and enlightening at the same time.

Recommended.
Posted by NancyO at 11:11 AM