True or not, it makes for a rollicking good story: An Adventure, by C.A.E. Moberly 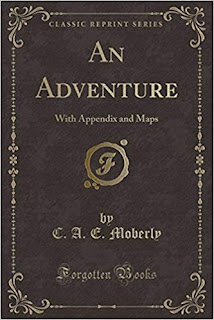 In August 1901, two women visiting Versailles decided they'd visit the Petit Trianon.  Baedeker in hand, Miss Charlotte Anne Elizabeth Moberly and Miss Eleanor Frances Jourdain set off from the Salle des Glaces toward their destination, and what happened next became the subject of this book.   It also sparked a controversy that continued over the decades, a number of books, radio and television dramatizations, and as Wikipedia quotes historian Roy Strong, the incident  "retained its hold on the public imagination for half a century."  Even now, a full century-plus later, all manner of websites exist on the topic of what came to be known as the "Moberly-Jourdain Incident," so obviously some people are still interested.

The two women (who go by the pseudonyms of Morison and Lamont in this book)  set out on what Miss Moberly/Morison described as "a most enjoyable walk."  They passed the Grand Trianon which was on their left,


"and came up a broad green drive perfectly deserted. If we had followed it we should have come immediately to the Petit Trianon, but not knowing its position, we crossed the drive and went up a lane in front of us."

Evidently Miss Moberly was surprised that Miss Jourdain/Lamont didn't stop to ask directions from a "woman who was shaking a white cloth out of a window of a building at the corner of the lane," but they continued on their way, and eventually came to a point where "there were three paths" in front of them.  They followed the center path, since there were two men there from whom they thought they might get directions.  The men were dressed "in longish green coats with small three-cornered hats," and indeed directed them to continue straight. When they left the lane,  Miss Moberly reports an "extraordinary depression" that had come over her that she could not shake. Coming to a small garden kiosk, they encountered a man who looked at them, causing Miss Moberly to note that this was the "culmination" of her "peculiar sensations," and that she "felt a moment of genuine alarm."  Without giving away all of the strange occurrences reported by these women, they encountered yet another man who let them know that they were going the wrong way, and eventually they arrived at a house they had assumed was the Petit Trianon.  And if things weren't already weird enough for these two women, they become even more bizarre at this point, when Miss Moberly encounters a woman sketching.

On returning to Paris, an entire week elapsed before their strange afternoon came up in conversation.  Miss Moberly, who was writing a "descriptive letter" about their "expeditions of the week before," notes that the "scenes came back one by one," and she was once again plagued by the "same sensation of dreamy unnatural oppression."  At that point she turned to her friend and asked her if she believed that the Petit Trianon was haunted, to which Miss Jourdain instantly replied "Yes, I do."  They talked about it for a while, then the matter was dropped until some three months later, when Miss Jourdain reveals something to Miss Moberly about that day that prompted the latter to write that "we had a new element of mystery," and that the two women


"resolved to write down independent accounts of our expedition to Trianon, read up its history, and make every enquiry about the place."

They each wrote out their accounts independently, and spent the next few years trying to find evidence for what they'd witnessed.  Miss Jourdain reveals in her account her discovery that August 10th, the day that they had been at Versailles, "had a great significance in French history...":


"On August 10th, 1792, the Tuileries was sacked.  The royal family escaped in the early morning to the Hall of the Assembly, where they were penned up for many hours hearing themselves practically dethroned, and within sound of the massacre of their servants and of the Swiss guards at the Tuileries."

She also reveals that both of the women wondered if they had "inadvertently entered within an act of the Queen's memory when alive..."

In 1911, the two women published this book, which includes their accounts, their research over the ten years that had elapsed since their initial experiences, and it is here that the authors also attempt to offer proof that what they had encountered could have only taken place in the late eighteenth century.  They claim to have had no previous knowledge of Versailles in the eighteenth century prior to 1901, making it impossible to have come up with the detailed descriptions given in their respective accounts. Noting that they do not "pretend to understand -- what happened to put us into communication with so many true facts,"  they go on to say that the book was meant to "record exactly what happened as simply and fully as possible." 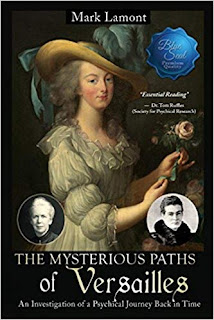 Whether or not you believe their account after reading this book, it does make for a rollicking good story. It obviously held great appeal for contemporary readers; Mark Lamont who investigated this case and published his findings in his The Mysterious Paths of Versailles (Book Venture Publishing, 2018), says that it was popular enough to merit a second printing the same year it was released. (69)  And speaking of Lamont's book, anyone planning to read An Adventure or who is even remotely interested in the experiences of these two women really ought to have Mysterious Paths of Versailles on hand as a companion read.  Lamont not only combs through their accounts, but piece by piece examines their evidence, and examines various hauntings and seemingly unexplainable phenomena experienced by others.  He ends by repeating a statement made by the Spectator's review of An Adventure in 1911, saying that it "probably best sums up the current status of the case as it did a century ago" -- it is

If you can find it, there's also a dvd based on this story (although seriously embellished -- I know, since I watched it after finishing An Adventure) called Miss Morison's Ghost, with Dame Wendy Hiller in the title role.  And while it's your own call whether or not the story is a hoax, An Adventure is still a fine read for anyone at all interested in otherworldly sorts of phenomena.