Killers of the Flower Moon, by David Grann 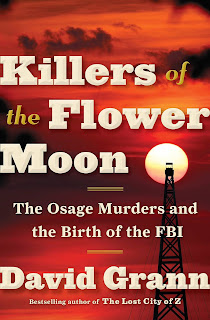 I love David Grann's work. I've read his The Devil and Sherlock Holmes which I loved, The Lost City of Z which I loved even more, and I've already pre-ordered his next book The White Darkness, which comes out in October, although you can get a head start on it via The New Yorker.  This book, Killers of the Flower Moon, is probably the most difficult of all of his books to read on an emotional level, since it deals with such an horrific topic.  This one I had to read sections at a time because it was so powerful; it also made me so damn angry I actually found myself yelling.  Personally,  when a person like David Grann can hand me a story that gets me that emotionally involved, well, he has done his job and has done it well.

The back cover blurb gives the basic story, which is divided into three different "Chronicles."  In the first part, we discover that (and this isn't spoiling it -- just sort of paraphrasing the blurb) people in the Osage Nation had the sense to buy up the rights to the land on which they were eventually settled in Oklahoma.  When oil was discovered, as the blurb says, by the 1920s, they became "the richest people per capita in the world."  However, the Federal Government decided that the Osage people weren't capable of managing their own wealth, and as though they were children, assigned guardians to do just that.  As Grann reports,


"Over the tribe's vehement objections, many Osage ... were deemed  'incompetent' and were forced to have a local white guardian overseeing and authorizing all of their spending, down to the toothpaste they purchased at the corner store.  One Osage who had served in World War I complained, 'I fought in France for this country, and yet I am not allowed even to sign my own checks.' "

Even worse than the Feds' prejudice in setting up these guardianships in the first place, these people were generally chosen from among the most prominent citizens in Osage County, and in what can only be called a racist move, all of them were white.  In telling this story, Grann has focused on the family of an Osage woman named Mollie Burkhart.  As he explains in an interview at vice.com, placing Mollie at the center of the story allowed him to treat her as a real person, not just a statistic or a descendant, and it also gave him the opportunity to tell things from the point of view of the Osage.  The first section takes us to the murders of several members of the Osage Nation, of which Mollie's family became a "prime target," "one by one."

The FBI becomes involved in part two, in which Grann goes through why J. Edgar Hoover wanted his men on the case, the possible suspects, and introduces us to Tom White, a former Texas Ranger turned FBI agent who put together a team that would work undercover to try and solve the case.  While I won't dwell here on what happens next, one of the most infuriating parts about these murders is that the more deeply White delves at the time, the more a much larger picture of a huge and all-encompassing  conspiracy develops and truthfully, I wondered if anyone was ever going to be brought to justice for these horrible crimes.

But it's really part three that shook me to my core, because of what Grann discovers in his research. About that I will say nothing, but I could hear myself gasping at the implications of what he found.  And to be really honest, I was so upset after finishing this book that I had to step away for a few days just to get myself together again.

The book is masterfully done, especially since the author sets what happens to these people in the context of the broader period of rampant corruption and graft at the highest levels of government, and in that sense, provides a background for what will occur over the course of this narrative. At the same time,  this book further reinforces the fact that when history is recounted in this country, it's white history, while the Native Americans' stories are for the most part completely ignored.  You only have to be breathing these days to understand why that is.  But overall, what really hit home was the fact that this is not only a story that needed to be told and to be brought out into the open, but that as Grann says, it continues to resonate with the Osage people -- that it is a story that is "still living history for them."

Killers of the Flower Moon is not a long book so you may be tempted to read it all in one go, but don't.  This book is so powerful that even now while thinking about it, I'm getting angry all over again.  And now that I'm looking over what some other, less than enthusiastic readers have to say, I have to wonder what they expected.  This one from an Amazon reader especially killed me:


"I couldn't connect with any of the victims due to a lack of back story or personal history.  The reader just doesn't get to know the characters. It read like a boring history book that could have been so much more."

To each his/her own, of course, but evidently we didn't read the same book.