Conan Doyle For the Defense, by Margalit Fox 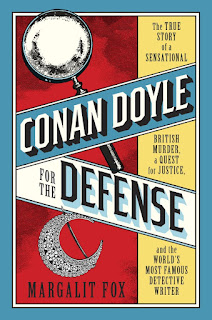 On the night of December 21, 1908, 82 year-old Marion Gilchrist sent her maid, Helen Lambie, on an errand to pick up an evening paper.  When Lambie returned, a downstairs neighbor was waiting at the door of Miss Gilchrist's flat on West Princes Street, Glasgow, and told her about some "fearsome noises" he and his sisters had heard in the Gilchrist flat from their flat below.   Lambie had a likely explanation in the pulleys used for the clotheslines, but the neighbor decided to wait at the door anyway while Lambie went in. As she did so, a man came toward her from the flat's spare bedroom and walked past Lambie and the neighbor.  Lambie, going into the dining room, called for the neighbor to come in, and discovered Marion Gilchrist laying on the floor with "nearly every bone of her face and skull being smashed."  The neighbor ran to get the police while Lambie made her way to find Miss Gilchrist's niece.  By the time she went back to West Princes Street and the scene of the crime, a doctor had discovered a "heavy dining room chair" that was likely the murder weapon, since Miss Gilchrist's wounds matched the shape of the "spindle-shaped legs."  As the night went on, a few Glasgow police detectives came to the flat. Papers had been strewn all around in the spare bedroom, jewelry belonging to Miss Gilchrist seemed be present and accounted for, with the exception of a "crescent-shaped diamond brooch", valued at fifty pounds.  Also noted: there was no sign of forced entry, meaning that the woman who normally kept her doors soundly locked most likely let her killer into the flat.  A warning went out to the "Pawns" about the brooch, and four days later, a bicycle dealer revealed to the police that he knew a man who'd been trying to sell a pawn ticket for a brooch matching the description of the stolen one.  It wasn't long before detectives honed in on the man with the ticket, a certain Oscar Slater.

The police became focused on this man, believing they had the right guy since, after all, he was already a man of interest -- he was reputed to be a pimp, a petty criminal, and they also discovered that Slater was on his way to America with his girlfriend.  He was picked up, arrested, held in New York City, but agreed to be extradited back to Scotland to prove that he was not guilty.  In the meantime,  the brooch that had been pawned turned out not to have been the one stolen from Miss Gilchrist;  the Glasgow police, however,  were certain that they had the right guy, and explored no other avenues, leaving out any other possible culprits and dismissing testimony from people who could have exonerated Slater.   The case, which came down to some pretty iffy eyewitness identification, went to trial; in May, 1909, Slater was found guilty and sentenced to death, with sentenced commuted to hard labor for life. The story might have ended there, but in 1912, Arthur Conan Doyle was asked to take a  look at the case, which he did using  the same sort of logical, rational approach he had imbued in his creation Sherlock Holmes  to go over the particulars of the Slater case in order to try to redress the huge miscarriage of justice that had occurred three years earlier and sent an innocent man to prison.

The questions at the heart of this story concern two main issues.  One, why was it that  the police, knowing that there was nothing but some pretty dubious eyewitness testimony to connect Slater with the Gilchrist murder, continued to pursue the case against him, and two,  given that factor,  how could the trial culminate in a guilty verdict that carried a death sentence?

Fox slowly takes us through the circumstances of Slater's case and its aftermath;  around these events she puts us squarely in a "watershed moment" in which these events occurred. As she notes, the case


"straddles the twilight of nineteenth-century gentility and the upheavals of twentieth-century modernity,"

a "Janus-headed era" which looked both forward and backward. It was a time in which police work moved along  two investigative  paths, both of which she notes, existed side by side:  a "nascent, rationalist twentieth-century  science that would come to be called criminalistics" -- a "scientific, rationalist" approach,  and  the "murky nineteenth-century pseudoscience known as criminology,"  based largely on work developed by Cesare Lombroso whose theories posited that criminality was inherited and that there were "born criminals" who could be identified on the basis of certain racial and ethnic "signifiers." That's just a quick version of his ideas; there were even worse parts of Lombroso's ideas that I won't go into here.  The Glasgow police evidently chose to not take their time and do a rational analysis of the case based on what they actually had in the way of evidence (which was pretty much nothing), but set against the backdrop of rising anti-Semitism and xenophobia, police, prosecutors, and even the judge  succeeded in making Slater, a German, a Jew, and a known petty criminal, and  "one of the most convenient 'convenient Others' of his age" into the perfect a murder suspect. To get a conviction, they all they engaged in some pretty dodgy practices involving "suborned perjury, withheld exculpatory evidence, and all the inflammatory  illogic that the criminological method allows."

Over the course of this narrative, among other things,  the author also seeks to reveal Oscar Slater as a human being rather than just an unwanted "Other."  She also examines Conan Doyle as a crusader, an "emblematic avatar" of the "long nineteenth century," which as the author says, ran beyond the century mark up to the outbreak of the first world war.

The inside dustjacket blurb of this book tells its readers that


"For all the scores of biographies of Arthur Conan Doyle, creator of the most famous detective in the world, there is no recent book that tells this remarkable story, in which Conan Doyle becomes a real-life detective on an actual murder case."

The Slater case may not be as well known as the Edalji case,  the basis of the novel Arthur and George by Julian Barnes, so this book is good mainly for people who may be interested to learn about Conan Doyle outside of  his role as the "creator of the most famous detective in the world" and as a man with a "code of honor" who more than once refused to let justice take a wrong turn and affect innocent lives. But beware --  I've read three or four biographies of Conan Doyle since I read this book, and I don't completely agree with Fox's conclusions about the man himself, in which she sort of glosses over more than a few facts. I'll refer you to Russell Miller's The Adventures of Arthur Conan Doyle and Out of the Shadows by Georgina Doyle for further reading.  And while personally I think that there's a lot that could have been edited out without any detriment whatsoever to this story, one of the strengths of this book is that the author has managed to place her study  meaningfully into the context of that "watershed moment" mentioned above, socially, culturally, and scientifically, rather than just rehashing the bare bones of the case.

While the blurbers call this book a "thrilling true-crime procedural," I wouldn't go that far, but  it is a story that speaks to our own contemporary concerns not only about "the racialization of crime" but also about some pretty shady practices in law enforcement and the justice system which all too often ruin the lives of innocent people.