Dr. James Barry: A Woman Ahead of Her Time, by Michael du Preez & Jeremy Dronfield 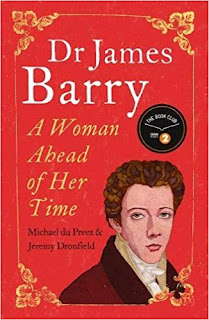 
In trying to make a dent in my hugely-oversized tbr pile, I picked up this book some time ago to read alongside Patricia Duncker's novel about James Miranda Barry, The Doctor (0060090413, Ecco, 1999),  which has probably been sitting there since it was published.    As I noted on my brief post-reading entry for this book at Goodreads, Dr. James Barry: A Woman Ahead of Her Time  is probably one of the best biographies I've ever read, and trust me, I don't say that lightly.


"was many things in his life: Inspector General of Hospitals, army surgeon, duellist, reformer, ladykiller, eccentric.  He performed the first successful Caesarean in the British Empire, outraged the military establishment, and gave Florence Nightingale a dressing down at Scutari."

Barry had left Ireland and enrolled in medical school in Edinburgh in 1809, and in his last year of study nearly missed being able to take his final exams because he was believed to be "too young to take a degree."  By 1812, though, he had graduated as an MD.  It was then that "Dr. James Barry had been officially conjured into existence," which may seem an odd statement except for the fact that James Barry had started his life as Margaret Bulkley in 1789.

The book, however, opens with Barry's death in 1865 and the discovery of Barry's long-held secret.  It was  shortly afterward that "the sensational story flew around the Empire,


reaching the ears of people who'd known James Barry throughout his career and all the way back to his youth more than half a century earlier."

The question then arises not only as to how all of these people who'd known him could have missed the fact that Barry was  actually a woman, but also how he had managed to pull off this "audacious deception," but more importantly, as the authors ask,

The two authors of this book then move back in time to answer this question, starting in Ireland with Margaret's childhood, moving on to the plan for Margaret to pose as a young man as a means to acquire an excellent education and then move on to university in Edinburgh for medical training.  The idea, it seems, was that after Margaret finished medical school as James Miranda Barry, she would travel as Margaret to practice medicine in Venezuela after General Don Francisco de Miranda had  liberated the country.  After Barry obtained his degree and "the coveted 'MD' after his name,"


"the time was coming for Margaret to cross the ocean and fight for revolution, putting aise the shell of James Barry, casting off the surtout, the cravat, the breeches and hat, the posture and imposture, Margaret Bulkley would emerge again, bringing her dresses out of storage, saved forever from the doom of drudgery as a governess or a man's possession. In the new revolutionary utopia of Venezuela, all that would matter would be her hard-won skills and knowledge."

According to the authors, the plan hit a snag when Miranda was arrested and sent back to Spain, where he would spend the rest of his life in prison.  Because of this turn of events,  Margaret was left with little choice regarding her future:


"Without her principal benefactor and the unique escape route he had offered, she had no choice but to remain in Britain, no more able to escape her male persona than Miranda could free himself from his Spanish gaol. Whatever the future held, Dr. James Barry was not yet done with, and the trunk of dresses and petticoats would remain shut."


Her options as Margaret were rather few -- she might have become a governess or a  married with limited  freedom; instead she decided to continue as Dr. James Miranda Barry,  and the authors go on to document his long and distinguished Army career which began in 1813.  He was fortunate enough to have great connections which helped him through rough spots more than once; he was  compassionate toward his patients, and made a number of innovative reforms.  On the other hand, Barry also had a tendency to rub some important people the wrong way due to his temperament, most especially people who either got in his way or proved themselves to be quacks or ill qualified to be practicing medicine, garnering the  reputation as a "tyrant," with  an "irritable and impatient temper" which "brought him into constant collision with authority."   As the authors explore the course of his career which took him throughout the British Empire, they reveal that there were several people who likely knew or at least guessed at Barry's secret, and never revealed it.  Sometimes, "the general impression and general belief were that he was a hermaphrodite,"  but the few others who knew protected him, keeping their first-hand information to themselves.

Anyone considering reading this book ought to know that while each and every facet of this study has been meticulously researched, Dr. James Barry: A Woman Ahead of Her Time is a compelling read that kept me turning pages.  Margaret Bulkley made a choice that allowed her to live life to its fullest, and while we get some hints that she may have missed her  identity as a woman at times (for example her trunk with the pictures of ladies' fashions on the lid), for Margaret and for James Miranda Barry it seemed to have been the right choice.

An excellent and truly exquisite book, I would recommend this book to anyone.
Posted by NancyO at 4:22 PM