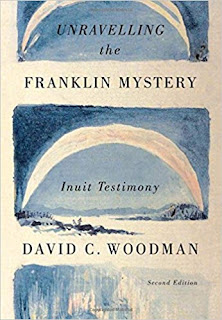 This is the second edition of this book, originally finished in 1988 and published in 1991.   In the preface to this second edition, the author notes that it "could not have come at a more appropriate time," citing the 2014 discovery of Franklin's HMS Erebus, a find that has "widely been seen as validation of oral history,"  in  "the area uniformly indicated by Inuit testimony." Woodman's book not only, as the back-cover blurb says, stands as a challenge to "standard interpretations and offered a new and compelling alternative" but as he states in the preface, questions "the prevalent dismissal of non-documentary sources."   His assumption throughout his research was that "all Inuit stories concerning white men should have a discoverable factual basis," even though many historians had often completely ignored these oral traditions


"because of the inherent difficulties of translation and analysis. When historians did consult the oral record, they often selectively used tales that supported their own preconceptions or the physical evidence, while ignoring the other tales as impossibly vague or unreliable."

It took ten years for Mr. Woodman to research his book and another five to put it all together, and what emerges are a number of accounts offered by a number of different witnesses, painstakingly and thoroughly examined by the author.   A very large part of the process involved sifting through recorded oral histories that were taken over a century earlier, which in itself seems to have been problematic, often because there were issues with the original interrogators, whose translations weren't always perfect and who had their own preconceived notions, often leading to misunderstandings.   The author had to read and correlate all of these accounts while also trying to sort out Inuit conceptions of time as well as place, no easy task given that in some cases, for example, place names used by one group of Inuits might be used by others to denote a different place altogether.  In the long run, however,  he was able to


"discover a scenario which allowed use of all of the native recollections, solved some troubling discrepancies in the physical evidence, and led to some significant new conclusions as to the fate of the beleaguered sailors."

It is important to realize that the author doesn't claim to have definitive answers here, since as he says, the Franklin mystery is a "puzzle without the prospect of complete solution," but he does point out in the preface that the 2014 discovery of the Erebus "validates the long-known Inuit traditions" that he explores so thoroughly in this book.


There is so much worthwhile happening in this book that I can't begin to cover it all.   As only one example, after the discovery of HMS Terror in 2016,  Mr. Jim Basillie, founder of the Arctic Research Foundation stated in a Guardian article that finding the missing Franklin ship "changes history," noting that


"it's almost certain that HMS Terror was operationally closed down by the remaining crew who then re-boarded HMS Erebus and sailed south where they met their ultimate tragic fate."

By examining different but amazingly consistent Inuit accounts, Mr. Woodman had come to  much the same conclusion in this book over twenty years earlier.  And while he was a bit off when it came to the location of the Terror,  in terms of the location of the Erebus he relied on clues given by the Inuit that put one of Franklin's ships somewhere near O'Reilly Island on the western side of the Adelaide Peninsula that ultimately proved correct -- including the fact that not only had it been visited by Inuit people while still intact, but he also discovered what would turn out to be an important revelation: the ship eventually sank in shallower waters where they could still see mast heads above the surface.

While I'm just a very casual armchair explorer, it wouldn't surprise me if  Unravelling the Franklin Mystery might someday gain recognition as one of the most significant works about the expedition, not just for the author's theories but mainly because of its focus on illuminating the importance of Inuit oral tradition.   At the same time, it can be a difficult and most challenging book to read, since it often gets a bit confusing with threads of one story that are picked up in later chapters as he tries to connect dots between accounts, often causing me to have to go back and reread what was said earlier.  The other thing I wasn't in love with were the maps in this book.  I had several tablet windows open off and on while I read, each with a map so that I could follow the known progress of the expedition, the routes of previous polar expeditions,  more specific maps of both coasts of King William Island and then, of course, the western side of the Adelaide Peninsula where the author posited that one of the ships had finally come to rest.  Having said all that, I was immediately engrossed and I probably can't even look at another book about the Franklin Expedition for a while, because this one is so good.   Very highly recommended to anyone even remotely interested in the subject.

All I have left to say is that I'm completely in awe of the author's research skills and what he's done here;  I'll have to work very hard to find another one that can impress me as much as this book.