The Trial of Lizzie Borden: A True Story, by Cara Robertson 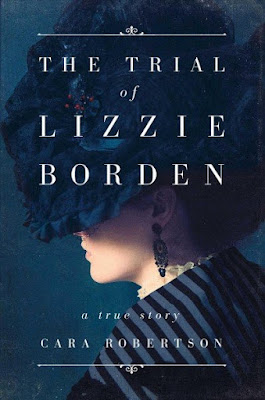 While I was reading this book, I wanted to share something in it with my darling spouse, who shares his work stuff with me (most of it I don't understand but because I want him to think that I care,  I nod and pretend like I do).  Before I began to launch into what I was going to say, I stopped a moment and asked him "You do know who Lizzie Borden was, right?"   Imagine my surprise at discovering that he'd never heard of Lizzie Borden, one of the most recognizable names in American history, a woman whose case continues to fascinate to this day.  (As a pertinent aside, I sat him down and made him watch two  (non-sensational) documentaries about Borden so he's been schooled.)


In The Trial of Lizzie Borden, just so we're clear, the author does not endeavour to solve the mystery of who killed Abby and Andrew Borden, but rather to peel away the sort of mythical elements of this story and get down to realities of the crimes, the investigation,  the trial and its aftermath.   At the same time, in presenting her account, she also examines the social and cultural factors of this time period, as the dustjacket reveals, to offer "a window into America in the Gilded Age, showcasing its most deeply held convictions and the most troubling social anxieties."   By the time I turned the last page, it seemed to me that the trial and the media coverage turned less on guilt or innocence and more on whether or not someone in Lizzie's respectable position could have possibly done such a horrific thing.  As  her attorney would later say as part of his closing arguments,


"It is not impossible that a good person may go wrong ... but our human experience teaches us that if a daughter grows up in one of our homes to be 32 years old, educated in our schools, walking in our streets, associating with the best people and devoted to the service of God and man ... it is not within human experience to find her suddenly come out into the rankest and baldest murderess."


Robertson's book plays out the story of the case in three parts.  First, in looking at the facts of the murders themselves, she doesn't open this account with the gruesome events, but rather Lizzie's attempt to buy prussic acid at a local Fall River Massachusetts drug store.  Lizzie wanted the acid supposedly "to put on the edge of a sealskin cape,"  but the author brings in a later article from the New Bedford Evening Standard as reporting that


"If a person wished to kill and avoid detection, and that person were wise, hydrocyanic acid would be the first choice among all deadly drugs."


Prussic acid is, as she reminds us, a "diluted form of hydrocyanic acid."  Immediately  we're wondering exactly why  Lizzie Borden is  trying to buy it -- was she really interested in her cape or was there some other use she may have had in mind?   From there we're taken directly into the Borden household, a place rife with tensions that had prompted locks for every door, Lizzie's resentment of her father's "determined economies" that among other things, kept the family from living on "The Hill" with the rest of the Fall River elite and put his daughters in "virtual social quarantine.  And then, of course, there is the daughters' attitudes toward their stepmother Abby, which had gone  from "chilly tolerance to open animosity" some five years earlier, resulting in the daughters' refusal to eat with their parents and to even speak with Abby "except  in response to a direct question."  Just before she launches into the murders, the investigation and the inquest,  Robertson reminds us of an incident involving two possible food poisoning attempts in the Borden home.


Part two is the longest and most detailed of the three, covering the trial.  It is, in my opinion, the best and most interesting part of the book, because not only do we get a look at the actual court proceedings, in which we come to realize exactly what a circumstantial case it actually was, but even  more fascinating to me was Ms. Robertson's presentation of the press coverage of the time.  Journalists not only sat in court each day to record the events of the trial and Lizzie herself as she sat in the dock, but went on to provide speculation and opinion  to its readers,  in some cases making it very clear which side they were taking, rather than offering a more objective stance. Biased media? You bet.

Part three examines the verdict and Lizzie's life after the trial and gets into the "Enduring Enigma" and "popular fascination with the Borden mystery," which combines the "enduring force of myth and the more prosaic intellectual challenge of a detective story, it is a 'locked room' mystery written by Sophocles."     She goes on to say, in getting to the heart of her argument here, that


"Even as the murders themselves seemed summoned from a mythic reservoir of human darkness, the trial of the alleged perpetrator occurred in a specific time and place: America in the Gilded Age, its most deeply held convictions and its most troubling anxieties inscribed in every moment of the legal process.  Lizzie Borden was a devout young woman 'of good family' -- a lady -- and an accused axe-wielding patricide. It should not have been possible."

According to the "science" of the day,  no one would have been surprised had the murderer turned out to be either someone whose "criminality" would have shown in features marking their ethnicity or class.  It might have also been less sensational and more acceptable had the perpetrator turned out have been some strange man who just happened to be on hand to commit these terrible murders.  But a woman of Lizzie's station hacking her parents to death so brutally seems to have been a scenario that would have,  when all was said and done, constituted some sort of threat to the existing order of Fall River in that particular place at that particular time.

The Trial of Lizzie Borden  is a book well worth reading for anyone who may have an interest in this case.  Aside from placing the case within its particular social/historical context,  the author seems to adhere closely to fact, doesn't go off on any tangents or theories that weren't expressed at the time, and keeps the narrative interesting enough for rapid page turning.    I'm also utterly impressed at the scope of her research.  I have read enough reader reviews to know that not everyone agrees with me, but aside from the weird word choice of "mansplaining," I have nothing to complain about.  Very nicely done.

I still think she did it.