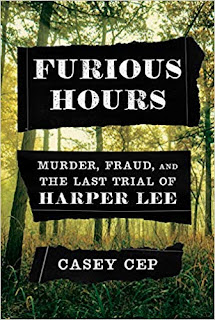 
On Saturday June 18, 1977, The Reverend Willie Maxwell and his wife Ophelia  were in the House of Hutchinson Funeral Home in Alexander City, Alabama, to mourn the death of Ophelia's sixteen year-old daughter Shirley Ann Ellington.  Shirley had left home one evening, and the next time she was seen was on Highway 9 not even a mile from home, but Shirley wouldn't be coming back. She had ostensibly stopped to change a flat tire, only to have the rim come loose and slip from under the jack; as a result, the car fell down with its full weight on top of her.  But hold on a moment.  Her hands were clean, the car's lug nuts were underneath instead of beside it, and the tire that she'd taken off wasn't even flat.  The rumor mill and the whispers started up immediately -- everyone in the county had an idea about  who had set up this scene and who was responsible for Shirley's death.  At the funeral, her grieving sister Louvinia noticed that Shirley's stepfather had "no tears or nothing in his eyes," and with a raised voice yelled out "You killed my sister and now you gonna pay for it!"  At that precise moment, someone fired three rounds into Maxwell's head, killing him almost immediately.   The shooter surrendered, confessed on the way to the station, leaving the question of whether he was a "hero or a cold-blooded murderer," the answer depending on, as the author notes,  whom you asked.  (By the way, I've said nothing at all here that can be taken as a spoiler, since I haven't told you anything much beyond what the dustjacket blurb says.)

It was this case and the ensuing trial that captured the imagination of author Harper Lee, who had not written another book since her To Kill a Mockingbird had been published in 1960.  It was in New York in 1976  that she'd first met the defense attorney for Maxwell's killer; a year later he had written up and sent her a summary of "the strange life and shocking death of the Reverend Willie Maxwell," a case in which she discovered "the kernel of a true-crime book" that took her to Alabama.  The attorney, "Big" Tom Radney, was "thrilled" at her interest, and gave her all of his files on the victim which encompassed "hundreds of pages of material," a veritable "gold mine."  Lee was excited, ready to face the challenge of doing something new and different, and on another level, Alabama was home.  There was also the fact that she knew that Truman Capote had stretched the facts in his In Cold Blood -- as she noted to Capote's New Yorker fact-checker and her partner  in various letters, Capote had "long ago put fact out of business" and made her "despair of 'factual' accounts of anything" -- so she was more than ready to put together a truly genuine account of her own.  At a time when, as Tom Wolfe noted about the so-called "New Journalists" of the 1970s,  "nonfiction had eclipsed the novel and that it was "the most important literature being written in America today," Lee was committed to writing "the old-fashioned, straitlaced journalism she admired," wondering whether or not she could stand on her own as successfully as the writers "trying to make nonfiction read more like fiction."   The truth is though that with  all of the resources available to her including Radney's files, newspaper clippings, interviews, court transcripts, a background in criminal law, no set deadline and above all encouragement, only four pages were ever passed on and the book, which she had tentatively called The Reverend, never got written.  In Furious Hours, the author tries to piece together why.

This book, among other things which I won't mention here, examines the events, legal and otherwise,  that inspired Lee back in the late 1970s to write again; to get to the heart of the case that caught her attention the author goes back in time to give us a glimpse at why the question  arose as to whether Maxwell's killer was a hero or a cold-blooded murderer.  To do this, Cep had to take a look at the Reverend himself and the people in his community who knew him, or at least knew of him; his reputation was larger than the man himself, for many reasons.   She then goes onto the trial with Tom Radney and how he handled the killer's defense,  and I have to say that all of that is quite interesting --  while not a lot of suspense happens in the unfurling of that tale, it still had the power to definitely keep me engrossed, largely because of Maxwell himself, and  I can totally understand why Harper Lee would have entitled her book  The Reverend.   The biggest issue I have with this book is that it isn't until page 150 that she finally gets to Harper Lee herself, and by that time, not counting the acknowledgments, notes, and bibliography, we're down to the last 126 pages of text.

These last 126 pages, however,  are well worth the reading, especially for anyone not familiar with Lee except through her work and occasional bits of biography here and there,  meaning people like me.   In essence it's a biographical section  that takes us through Lee's life up to the time of her decision to write her book in the 1970s; it continues on through Lee's time on the project while working on it and not, and then comes down to her later years and her death, and then finally gets into the issue of whether or not she actually finished it.  As she relates the information here, Cep also  tries to discover what might have been the reasons behind Lee's giving up the project, but really, I think one of the issues is that Lee seems to have been so much inside herself with her own demons that trying to fathom her as a whole is just plain not doable. I will say though that I was impressed with the author's attempts, as well as her willingness to take on a woman who seems to have been far more enigmatic than can be easily conveyed on the page. As an aside, I'm also  impressed with the way she handled the whole Go Set a Watchman issue (a book I did NOT like and in so saying gained the derision of many of my reading peers) without actually offering an opinion on it, instead just relating facts around the book both in its early years and then later after it had been "discovered."

Speaking as just an ordinary reader person,  I think one of the problems other readers have had with this book (and one I completely understand)  is that somewhere along the line it's been labeled as "true crime" (and I'm just as guilty, tagging it this way but I couldn't come up with the right phrase), so when Lee finally steps in to the story, there's a bit of a disconnect somewhere. Had the book actually started with Harper Lee having met Radney, which sparked her interest in the story, then continued on as it began here with the look back at events leading up to why Maxwell was killed and what happened afterwards before circling back to Lee, things would have been a bit more straightforward and would have had more of a flow, and readers wouldn't be commenting about it seeming like two books, which it sort of does. However, after giving it a lot of thought since finishing, I'm thinking that beginning her book as the author did here, perhaps we're getting the factual story that Lee might have told had she actually finished her book, but it's a bit of a cart-before-the-horses approach that Cep has taken here, which can be confusing.  It's an issue that's hard to ignore, along with sections of text filled with what I felt were extraneous information that didn't make a difference to how the narrative progressed and could have easily been left out. On the other hand, to be very fair, anyone who reads the Prologue will clearly see that Cep lays out exactly what you're going to be reading and the order in which things are going to be happening, with Lee coming in at the last, so just beware.

Having said all of that, though, despite the confusion, I was blown away by the fact that this was Cep's first book, and I found the story to be engrossing, intriguing, a bit sad and quite satisfying.  It's a book I would certainly recommend to anyone at all interested in Harper Lee, racial politics in the American deep south, and in (for lack of a better phrase that I still can't think of) true crime.