The Library of the Lost: In Search of Forgotten Authors, by Roger Dobson 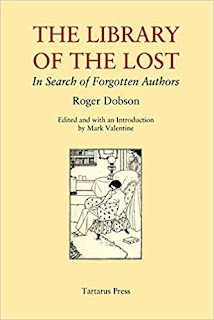 The Library of the Lost is a tribute to Roger Dobson, a writer whose devotion to literature seems to have known no bounds. It is composed of twenty of  his essays that are all delightfully informative, covering a wide range of topics and people connected to literature of the past.

It is author Javier Marías who gets the first say about his friend in this volume, in his article written for El Pais after Dobson's death in 2013.  Entitled  "A Remarkable Man,"  Marías describes Dobson as being someone who puts his "energies into rescuing someone from oblivion who has been unjustly forgotten," and a "silent enthusiast" devoted to "something that no one else much cares about."   Mark Valentine says of Dobson in his Introduction (parts of which are also found in his earlier post after Dobson's death in  Wormwoodiana ) that he was


"an author, journalist, actor, and bookman who loved to explore the stranger margins of literature and its most outré characters,"

a man "devoted to literature;" who was the "leading Machen scholar of his time," and "extremely well-read."  Even if I had not read the introduction, I would have been able to guess immediately  that Dobson was an "extremely well-read" man  given the examples of his amazing knowledge shared over all twenty essays collected in  Library of the Lost.

The book is filled with astute, articulate, clever and often humorous essays about a number of different literary figures, some of whom are familiar to most readers, including Montague Summers, "a Jekyll and Hyde in reverse," M.P Shiel, George Gissing, Dennis Wheatley, Edward Bulwer-Lytton, and W.B. Yeats.  While he doesn't get his own chapter here, Aleister Crowley features quite a bit, for example in "W.B. Yeats and The Golden Dawn," and  in another essay about poet Althea Gyles, a "strange red-haired girl" who asked for and received advice on how not to become too "enmeshed" by him.  Less familiar subjects to me (and okay, positively unknown in a few cases)  are Brocard Sewell, Julian Maclaren-Ross, John Gawsworth, Wrenne Jarman and Jocelyn Brooke.  There are also essays in which the focus is not a specific author, but writers from the past still manage to be found within these as well.

I haven't mentioned Arthur Machen, but he is, of course,  most prominent throughout Library of the Lost. As just one example of many I could offer,  there are a number of discussions about  Machen's characters, for instance,  Wilde's Dorian Gray as a possible inspiration for Lucian Taylor of Hill of Dreams, the literary ancestors of  The Great God Pan's Helen Vaughan, and how  Machen's own experiences and "lonely struggles in London" may reflect those of some of the people who inhabit his fictional worlds.   It's all fascinating stuff, great food for thought, and perhaps most importantly for me, filled with signposts to follow in future reading.

As the blurb notes,


"This collection will delight all connoisseurs of fantastic, supernatural and outré literature."

I will add only that the book should come with a warning label for potential readers.    As soon as I had started reading, I grabbed pen and paper and started noting titles of various books and stories mentioned here that  I wanted to read.  When I'd finished Library of the Lost, the list numbered thirty-four, of which I only owned twelve.  I bought three more immediately, and then after a second read, I purchased another three.  I couldn't help myself; Dobson had convinced me that these are all works worth reading. I can't begin to say how very much I loved this collection, but the proof is really in the new books now in my home library and their shelf  designated as "Dobson to-reads" after finishing it.