Overground Railroad: The Green Book and the Roots of Black Travel in America, by Candacy Taylor 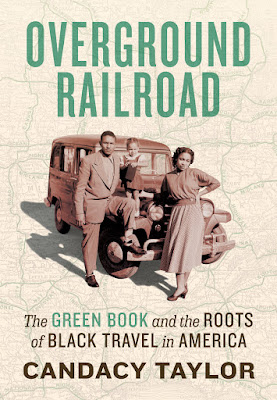 
"it didn't tell you if a place had a good steak, or good seafood, or had a soft bed...it told you where you would be safe."

This book is a must read.  An absolute must read.

I'd first heard of the Green Book while reading Matt Ruff's novel Lovecraft Country a couple of years back.  In the novel, set in the 1950s, one of the characters was the editor/publisher of something called The Safe Negro Travel Guide.  I remember at the time thinking what a crap thing it was that something like The Safe Negro Travel Guide had to even exist, and wondering if there was some underlying truth to it I looked it up, and sure as s**t there it was, The Negro Motorist Green Book.  I was appalled, actually, a) that this was a real thing and b) at my own ignorance -- I had no clue that it existed.

However sad the fact of its existence, it turned out to be, as author Candacy Taylor notes, "an ingenious solution to a horrific problem,"  representing


"the fundamental optimism of a race of people facing tyranny and terrorism."

In Overground Railroad, the author (who has visited over four thousand Green Book sites, and  provides some of the photos she's taken in the book)  offers an across-the-decades overview of the  Green Book, published from 1936-1967, setting her work within both historical and geographical contexts of American history.   In doing so, she examines racism and other forces at work in this country that led to the necessity of creating such a guide.   Victor Green, who founded the Green Book in 1936, most likely made no money from it, but as the author notes,


"his reward was much more valuable than money, because for every business he listed, he may have saved a life."

As she also states, "real change can come from simple tools that solve a problem," which is what made the Green Book so powerful.

The dustjacket blurb for Overground Railroad states that


"During the Jim Crow years and into the civil rights movement, travel for black America was difficult and dangerous. Black travelers couldn't eat, sleep, get gas, or shop at most white-owned businesses."

Over the years that the Green Book was published, racial segregation was in "full force" across this country.  While the automobile offered African-American families  a larger measure of personal freedom and a chance to "venture out onto America's highways and enjoy the country they helped build," they didn't have access to a lot of the US due to segregation.  Beaches, swimming pools, golf courses, theaters, parks, and other facilities were either whites only or had separate areas for African-Americans.    "White Customers Only" signs were everywhere, and black people suffered humiliating experiences when they were more often than not denied access to basic services/necessities -- even Coke machines were off limits in some cases.  Prior to the advent of the Interstate Highway system most long-distance auto traveling was done via country roads, and then along small-town main streets where black travelers could likely be subject to harassment or worse by local law enforcement.  Sundown towns (and sundown counties, for that matter) also posed various dangers for African-American motorists who just might find themselves stranded on their roads at night, and as the author mentions, there were no published lists to let anyone know about their existence.   Route 66 was one of the worst roads to travel, since there were hundreds of sundown towns along the way and services for black people even more difficult to find than for white travelers.   Even after the interstates were built in the 1950s, travel continued to be filled with uncertainty and danger, and while there were other black travel guides in circulation, "a blessing to the black community,"  it was the Green Book that not only stayed in print the longest but also had the longest reach and the widest readership.  It became a staple in glove compartments, allowing people to "travel without embarrassment," as the inside cover of the 1948 Green Book proclaimed.   While it couldn't protect travelers from racist cops, as the author notes, "it was still the best travel aid a black family could have."

The Great Migration of African-Americans lasted from 1915 to 1970, and for people fleeing horrific Jim Crow realities including lynchings (the author cites more than four thousand black people having been massacred by the KKK and "other white vigilante groups" between 1877 and 1968) or who were in search of better opportunites in the North (or in some cases westward),  the Green Book was not only a "perfect tool to facilitate" this mass move, but it "likely gave black Southerners the courage they needed to leave."  Getting into a car and leaving wasn't as simple as it sounds -- even if a person had a job allowing him/her to make regular car payments, a lot of car dealers wouldn't sell to African-Americans, and banks weren't too eager to loan them the money anyway.  In some cases a white person had to offer to guaranteee a loan by co-signing. And while in Jim Crow states, sometimes just passing a white man was on the highway was a dangerous move.

The dustjacket blurb also notes that this guide was "hailed as the 'bible of black travel,' "  but in reality, it was so much more -- as the author notes, it was also

These establishments included restaurants, gas stations, vacation spots, nightclubs, tailors, beauty parlors, motels and tourist houses among many others.   Although some white-owned, integrated places allowed African-Americans, the majority listed in the Green Book were black-owned enterprises which were not only safe havens for travelers, but the money people spent there was a boon to and strengthened local economies.

Another major impact of the Green Book  is that it helped to shape and strengthen a sense of community among African-Americans,  which would become very important especially during the civil rights years.   In Birmingham, Alabama, for example, self-made, black millionaire A.G. Gaston built A.G. Gaston's Motel in 1954;  it was listed in the Green Book in 1956.   He had intended that it should be a "place where his community could feel safe to congregate, eat, and socialize."  Gaston was an important figure not only in Birmingham business and in his efforts to support African-Americans who needed help, but he was active in the Civil Rights movement.  His motel served as Martin Luther King Jr's headquarters where he had a "war room" to organize protesters and strategize for his campaigns.  The Green Book sites, the author states, were "on the front lines in the battle for equality."

Obviously this is just a very, very brief sketch of Overground Railroad. I'm not a reviewer, just a reader, and what Henry Lewis Gates, Jr. says about this book on the back-cover blurb sort of sums it all up:


"If 'making a way out of no way' is a theme that runs throughout African-American life, few things encapsulate that theme more powerfully that the Green Book. A symbol of Jim Crow America, it is also a stunning rebuke of it, born out of ingenuity and the relentless quest for freedom."

It is unforgettable, compelling and a book that is not only beyond relevant but also critical reading in our own times, one that should be on the shelves of every library everywhere including the one in your home.   It is worthy of winning any book award nomination that may come its way.